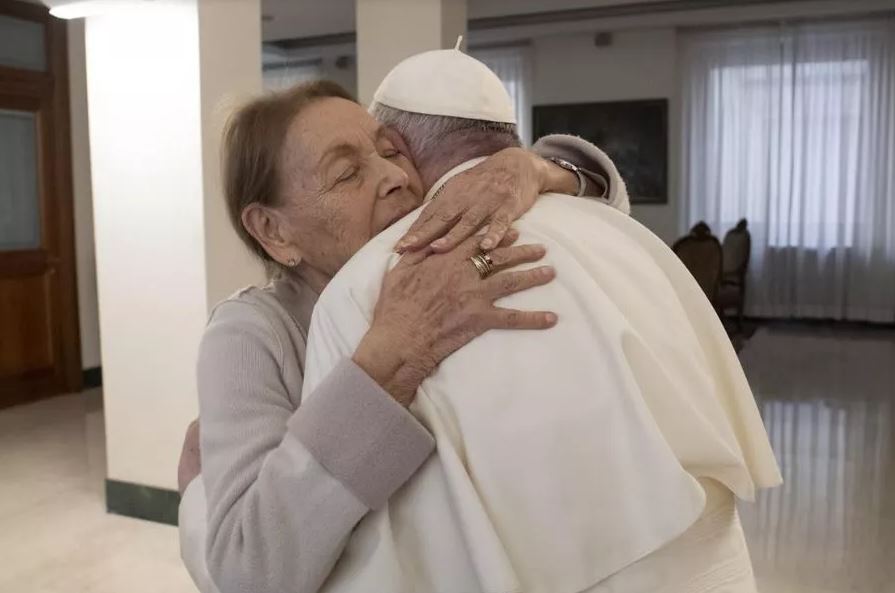 Born in Hungary in 1931, Edith Bruck survived the Nazi concentration camps in Auschwitz and Dachau, where she was sent with her parents, two brothers, and a sister at the age of 12.

The Holy See press office said on Jan. 27 that the Pope had “a long and affectionate conversation” with the 90-year-old Hungarian-born Jewish writer at his residence, the Casa Santa Marta.

“In particular, both stressed the inestimable value of transmitting the memory of the past to the youngest, even in its most painful aspects, so as not to fall back into the same tragedies,” the press office said.

The Pope visited Bruck at her home in Rome in February 2021.

The writer was born in Hungary in 1931 but has lived in Italy since her early 20s. She survived the Nazi concentration camps in Auschwitz and Dachau, where she was sent with her parents, two brothers, and a sister at the age of 12.

Her parents and a brother died in the concentration camps. Bruck and her remaining siblings were freed from the Bergen-Belsen camp by the Allies in 1945.

Bruck previously thanked the Pope for highlighting anti-Semitism during his visit to Hungary and Slovakia in September 2021. He told pilgrims: “It is necessary to remember the extermination of millions of Jews, and people of different nationalities and religious faiths. This unspeakable cruelty must never be repeated.”

“I appeal to everyone, especially educators and families, to foster in the new generations an awareness of the horror of this black page of history. It must not be forgotten, so that we can build a future where human dignity is no longer trampled underfoot.”