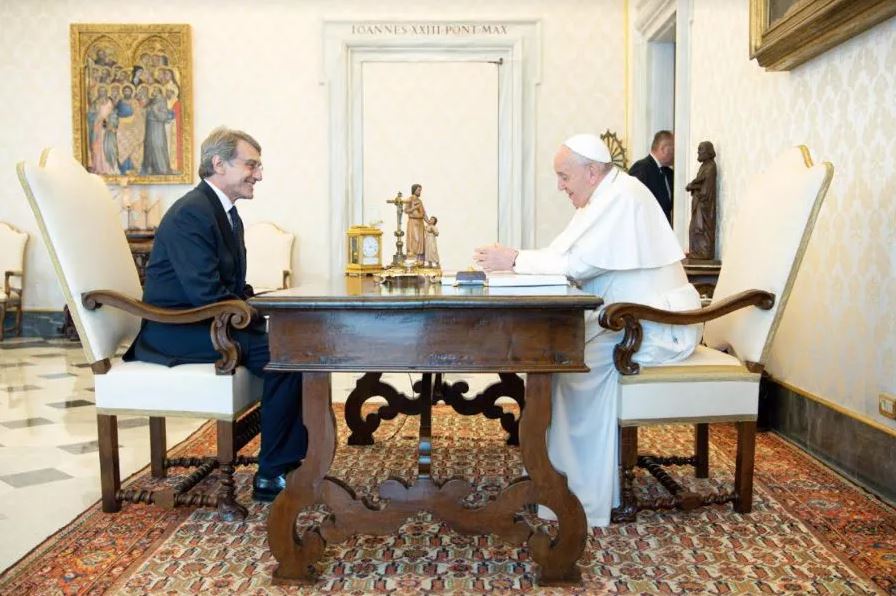 The European Parliament voted on June 24 to adopt a report describing abortion as “essential healthcare” and seeking to redefine conscientious objection as a “denial of medical care.”

VATICAN CITY — Pope Francis met with the president of the European Parliament on Saturday, two days after the EU’s law-making body endorsed an “extreme” report on abortion.

The pope received David Sassoli in a private audience at the Vatican on June 26.

A European Parliament press release said: “The conversation with the Holy Father focused on the need to protect the weakest and most vulnerable: the rights of people are the measure of all things. The European recovery will only be successful if it produces a reduction in inequalities.”

The European Parliament press release said that the three men spoke about “the situation in the Mediterranean, Africa, the Western Balkans, and the accession process, and the Eastern neighborhood.”

It added: “Particular focus was given to European efforts to make vaccines available in low-income countries, especially in Africa.” The European Parliament voted on June 24 to adopt a report describing abortion as “essential healthcare” and seeking to redefine conscientious objection as a “denial of medical care.”

The Matić Report also asserted that abortion is a “human right” and violations of “sexual and reproductive health and rights” are “a form of violence against women and girls.” Members of the European Parliament voted by 378 votes in favor, 255 against, and 42 abstentions, in favor of the report at a plenary session in Brussels, Belgium.

The report is not binding on the EU’s 27 member states, only two of which — Poland and Malta — do not permit abortion on demand or broad social grounds. Before the vote, pro-life groups and Catholic leaders had urged the European Parliament to reject the report, presented by the Croatian politician Predrag Fred Matić.

The Parliamentary Network for Critical Issues (PNCI), based in Washington, D.C., described the document as “extreme” and “radical.”

The Secretariat of the Commission of the Bishops’ Conferences of the European Union (COMECE) expressed alarm at the report, saying that that it was “ethically untenable” to classify abortion as an “essential” health service. The Nordic Bishops’ Conference said that the report’s stance on conscientious objection “jeopardizes individuals’ entitlement to follow their conviction in moral and religious matters, placing them at risk of losing their job or even barring them from access to work in healthcare.”

The Matić Report, officially known as the “Report on the situation of sexual and reproductive health and rights in the EU, in the frame of women’s health,” was adopted by the European Parliament’s Committee on Women’s Rights and Gender Equality on May 11. Two Members of the European Parliament, Margarita de la Pisa Carrión and Jadwiga Wiśniewska, set out a “minority position,” arguing that the report had “no legal or formal rigor.”

“It goes beyond its remit in addressing issues such as health, sexual education, and reproduction, as well as abortion and education, which are legislative powers belonging to the member states,” they wrote. The European Centre for Law and Justice (ECLJ), an NGO based in Strasbourg, France, suggested that the report’s supporters were seeking “to introduce a new norm without it appearing at first sight to be imposed.”

In my conversation with @Pontifex today, we focused on the need to protect the weakest and most vulnerable.

The rights of people must be the measure of all things.

Only if it reduces inequalities, will we have a successful European recovery. https://t.co/Dwnp9uNg9Z pic.twitter.com/dEp3SvbuSp

“I am deeply saddened by the European Parliament resolution calling for the possibility of killing unborn children,” Archbishop Gądecki wrote on his Twitter account June 24.

“Satan Can Destroy Fatherhood”: A...

The Amazing Discoveries of Catholi...