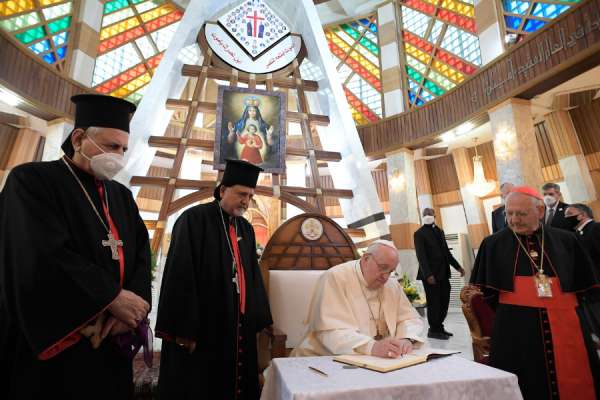 The March 5 meeting with bishops, priests, religious, seminarians, and lay catechists took place inside the Syriac Catholic Cathedral of Our Lady of Salvation.

The pope spoke to the Church leaders on the first day of his historic three-day trip to Iraq, praising them for their faithful witness to Christ amid years of adversity.

“May your witness, matured through adversity and strengthened by the blood of martyrs, be a shining light in Iraq and beyond, in order to proclaim the greatness of the Lord and to make the spirit of this people rejoice in God our Savior,” he said.

Pope Francis is in Iraq March 5-8 on a trip intended to strengthen the hope of the country’s persecuted Christian minority and foster fraternity and interreligious dialogue.

In just over three days, Francis will travel 900 miles within Iraq, meeting with political leaders, prominent Muslim clerics, and Christian communities. He is the first pope in history to visit the Middle Eastern country.

On his flight from Rome to Baghdad, Pope Francis called the journey “emblematic” and said “it is a duty to the land that has been martyred for so many years.”

After landing just before noon local time, he met with Iraqi Prime Minister Mustafa Al-Kadhimi at the airport before visiting Iraqi President Barham Salih at the presidential palace, where he addressed civil authorities.

The cathedral, also known as Sayidat al-Nejat, was the site of a 2010 suicide attack by the Al Qaeda-affiliated Islamic State in Iraq.

At an evening Mass on Oct. 31, 2010, six terrorists entered and seized the church, killing two priests and taking more than 100 hostages. During the four-hour attack, the militants massacred the Christians inside the church, firing guns, tossing grenades, and detonating explosives strapped to their chests.

Fifty-two people died before Iraq’s Counter-Terrorism Service stormed the church with the support of U.S. forces.

The attack at the Cathedral of Our Lady of Salvation remains one of the single deadliest assaults against Christians in Iraq since the start of the war in 2003.

Already in 2010, four years before the invasion of Iraq by the Islamic State, almost half of the beleaguered Christian population had already fled the war’s sectarian violence and persecution.

The beatification causes of the 48 Catholics who died inside the Cathedral of Our Lady of Salvation in 2010 advanced from the diocesan phase to the Vatican in October 2019.

When the cathedral was restored after the attack, a red carpet was placed down the center aisle in memory of the blood shed at the site.

In his speech in the cathedral on March 5, Pope Francis recalled the men and women who died in the attack over 10 years ago.

“We are gathered in this Cathedral of Our Lady of Salvation, hallowed by the blood of our brothers and sisters who here paid the ultimate price of their fidelity to the Lord and his Church,” he said.

“May the memory of their sacrifice inspire us to renew our own trust in the power of the cross and its saving message of forgiveness, reconciliation and rebirth.”

Remembering all victims of violence and persecution, regardless of religion, he said that the deaths of the 48 Servants of God killed in 2010 were “a powerful reminder that inciting war, hateful attitudes, violence or the shedding of blood are incompatible with authentic religious teachings.”

“For Christians are called to bear witness to the love of Christ in every time and place,” he continued. “This is the Gospel that must be proclaimed and embodied in this beloved country as well.”

“All of you share in the joys and sufferings, the hopes and anxieties of Christ’s faithful,” he said.

Despite the additional difficulties caused by the pandemic, he said that what “must never be locked down or reduced, however, is our apostolic zeal, drawn in your case from ancient roots, from the unbroken presence of the Church in these lands since earliest times.”

“Hardships are part of the daily experience of the Iraqi faithful,” the pope acknowledged. “In recent decades, you and your fellow citizens have had to deal with the effects of war and persecution, the fragility of basic infrastructures and the ongoing struggle for economic and personal security that has frequently led to internal displacements and the migration of many people, including Christians, to other parts of the world.”

He thanked the priests and bishops for being close to their people and being peacemakers.

“The educational and charitable apostolates of your local Churches represent a rich resource for the life of both the ecclesial community and the larger society,” he said. “I encourage you to persevere in these efforts, in order to ensure that Iraq’s Catholic community, though small like a mustard seed, continues to enrich the life of society as a whole.”

Francis urged them to foster unity and fraternity among the different Christian churches in Iraq, and to be “pastors, servants of the people, not civil servants, clerics of the state.”

According to the pope, the young people in Iraq are an “inestimable treasure for the future” and they “need you to care for them, to nurture their dreams, to accompany their growth and to foster their hope.”

“It is up to us to cultivate their growth in goodness and to nurture them with hope,” he said.

Pope Francis in Iraq: ‘The name of...

The True Story of a Catholic Chapl...