Pope Francis Ordains Nine New Priests in St. Peter’s Basilica: ‘You Will Be Shepherds Like Him’ 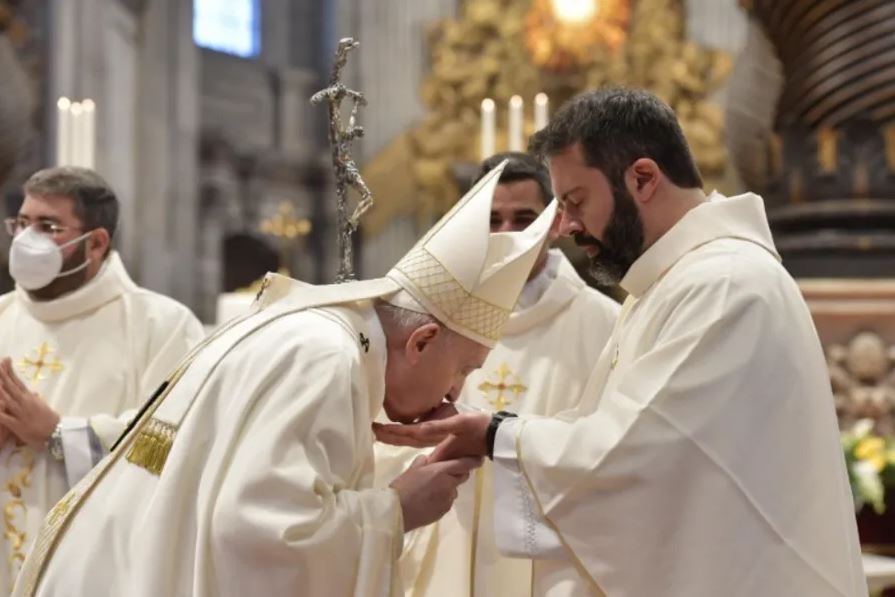 Pope Francis Ordains Nine New Priests in St. Peter’s Basilica: ‘You Will Be Shepherds Like Him’

The ordination ceremony took place on the Fourth Sunday of Easter, also known as Good Shepherd Sunday, and the 58th World Day of Prayer for Vocations.

VATICAN CITY — Pope Francis ordained nine men to the priesthood on Sunday, urging them to be shepherds like Christ throughout their priestly lives.

In a largely off-the-cuff homily in St. Peter’s Basilica April 25, he told them that they would share in the mission of Christ. The pope urged the ordinands to seek “closeness” to God, their bishop, their fellow priests, and the People of God throughout their priestly service. He described these as the “four closenesses of the priest.”

He said it was vital for clergy to remain near God in prayer.

“A priest who does not pray slowly extinguishes the fire of the Spirit within,” he commented.

He called on the ordination candidates to see themselves as “collaborators” with their bishops, ensuring unity in the local Church. He also asked them to be respectful of other priests.

“I suggest a resolution for you to make on this day: never speak ill of a brother priest. If you have something against another, be a man: go there, and tell him to his face,” he said.

He also encouraged them always to maintain a strong connection with parishioners.

“None of you have studied to become a priest. You have studied the ecclesiastical sciences, as the Church says you should. But you have been elected, taken from God’s people,” he told them.

He warned them that when priests lose contact with the people, they become “entrepreneurs,” rather than servants.

He said he was moved when he heard the story of a priest who was an able administrator. When the priest discovered that an elderly employee had made a mistake, he harshly scolded him, terminating his employment. The pope said that the elderly man died as a result.

“The man had been ordained as a priest and ended up as a ruthless entrepreneur,” he reflected.

Concluding his homily, he said: “If you are close to the Lord, to the bishop, to each other, and to the people of God, if you have God’s style — closeness, compassion, and tenderness — do not be afraid, everything will go well.”

The ordination ceremony took place on the Fourth Sunday of Easter, also known as Good Shepherd Sunday, and the 58th World Day of Prayer for Vocations, which the pope marked with a message in March.

The ordinands came from three seminaries in the Diocese of Rome: six from the Pontifical Roman Major Seminary; two from the Redemptoris Mater seminary, associated with the Neocatechumenal Way; and one from the Seminary of Our Lady of Divine Love, where candidates receive a Marian spiritual formation.

During the two-hour ceremony, the nine men wore white with matching white masks. The congregation consisted of hundreds of people, sitting apart and wearing face coverings to prevent the transmission of COVID-19.

Cardinal Angelo De Donatis, the Vicar of Rome, concelebrated the Mass at the Altar of the Confession with the pope, as did the superiors of the seminaries where the candidates trained.

After the homily, the ordinands approached the pope one by one. They knelt before him, placing their hands between his as he asked them: “Do you promise to me and my successors filial respect and obedience?”

After they answered in the affirmative, he said: “May God who began his work in you bring it to completion.”

Then, as a group, the candidates prostrated themselves before the altar, as the choir sang the litany of saints.

The nine men again approached the pope individually and he laid his hands on top of their heads, ordaining them priests.

The new priests were given stoles and chasubles. After putting them on, they presented themselves before the pope one by one. He anointed their hands with chrism oil while reciting a prayer.

Cardinal De Donatis then presented the priests with a paten — a shallow metal plate — and a chalice, along with a host for the celebration of Mass.

The pope then celebrated the Liturgy of the Eucharist.

After the Mass, the pope greeted the priests, kissing the palms of their hands. He then greeted members of the congregation, who included relatives of the new priests.

The three of the nine new priests for the Diocese of Rome — who range in age from 26 to 43 — were born outside Italy. The non-Italians come from Romania, Colombia, and Brazil.

• Fr. Salvatore Marco Montone, a 32-year-old from Calabria, southwest Italy, was born on Good Friday 1989. On the day of his baptism, the parish ran out of white garments for children, so the priest covered him with his stole. “I have no memories, of course, but my parents always tell me about it,” he said in a press release from the Diocese of Rome.

• Fr. Manuel Secci, at 26 the youngest of the nine new priests, was born in Rome. His vocation was nurtured at his local parish of Santi Simone e Giuda Taddeo a Torre Angela, where, he said, “the sense of community and the beautiful experiences nurtured my vocation.” He trained at the Pontifical Roman Major Seminary.

• Fr. Diego Armando Barrera Parra, 27, was born in Colombia. After completing high school, he volunteered in a juvenile detention center and a foundation for drug addicts. “There my desire was born to be able to help and serve others forever,” said the new priest, who studied at the Pontifical Roman Major Seminary.

• Fr. Giorgio De Iuri, a 29-year-old from Brindisi, a port city on the Adriatic Sea, first felt a call to the priesthood at the age of 15. While studying medicine in Rome, he decided to pursue the vocation, training at the Pontifical Roman Major Seminary.

• Fr. Riccardo Cendamo, 40, who trained at the Redemptoris Mater seminary, was previously a film director. In 2013, he was invited to show his co-directed short film Regreso a casa at the Ischia Film Festival. He has taught directing at the Accademia Togliani, a cultural association in Rome. Before his ordination, he said: “If I look back now, I realize that the call to the priestly vocation has always existed, that love had to mature.”

• Fr. Samuel Piermarini, 28, was a promising young soccer player who turned down an opportunity to play for the youth team of the Serie A club A.S. Roma. After discerning a call to the priesthood, he entered the Redemptoris Mater seminary.

• Fr. Mateus Henrique Ataide Da Cruz, 29, was born in Afogados da Ingazeira, northeast Brazil. He recalled that when he was 15, he started working for an elderly man. “I helped him with the computer,” he said. “In the work contract it was clearly written that every day I would also have to pray with him and recite the rosary. What I experienced at first as an imposition became a necessity for me.” He moved to Rome seven years ago to train at the Seminary of Our Lady of Divine Love.
Share With:
Previous Article