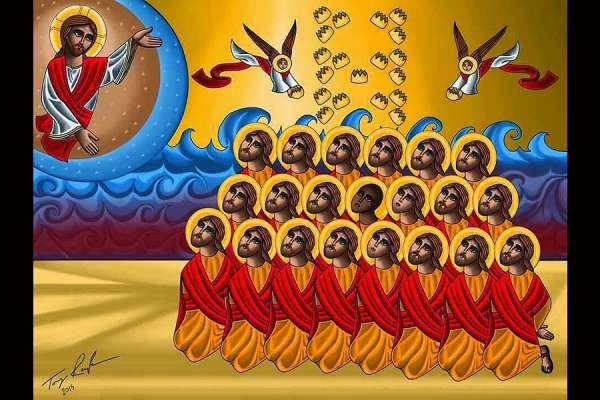 In a video message for the “Day of Contemporary Martyrs” Feb. 15, the pope said, “I hold in my heart that baptism of blood, those twenty-one men baptized as Christians with water and the Spirit.”

“I thank God our Father because he gave us these courageous brothers. I thank the Holy Spirit because he gave them the strength and consistency to confess Jesus Christ to the point of shedding blood. I thank the bishops, the priests of the Coptic sister Church which raised them and taught them to grow in the faith. And I thank the mothers of these people, of these 21 men, who ‘nursed’ them in the faith,” he said.

Francis sent the video message for an online event organized by the Coptic Orthodox Diocese of London to give thanks for the lives of contemporary martyred Christians.

The webinar was held on the anniversary of the martyrdom of the 21 Egyptian Copts who were kidnapped and beheaded by ISIS in Libya on Feb. 15, 2015.

Other participants in the “Day of Contemporary Martyrs” included Tawadros II, Patriarch of the Coptic Orthodox Church; Justin Welby, the Anglican Archbishop of Canterbury; and Cardinal Kurt Koch, president of the Pontifical Council for Promoting Christian Unity.

Pope Francis said that: “from their simple but consistent faith, they received the greatest gift a Christian can receive: bearing witness to Jesus Christ to the point of giving their life.”

“I join the holy faithful people of God who in their simplicity, with their consistency and inconsistencies, with their graces and sins, carry forth the confession of Jesus Christ: Jesus Christ is Lord,” he stated.

The pope thanked the 21 martyrs for their witness, and he thanked Christ “for being so close to your people, for not forgetting them.”

“Let us pray together today in memory of these 21 Coptic Martyrs,” he concluded, “may they intercede for us all before the Father. Amen.”