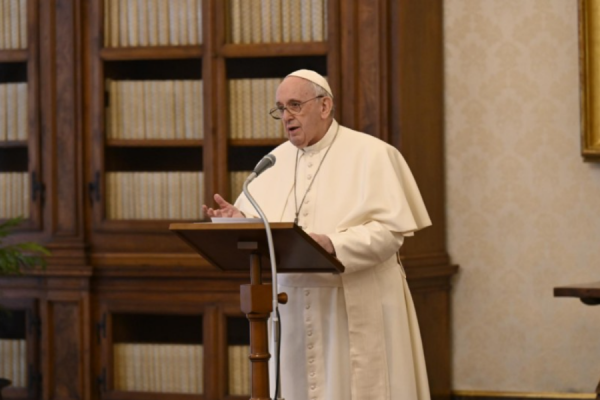 Speaking after the Angelus on Jan. 24, the pope led prayers for the 46-year-old Nigerian man who was reportedly found dead by volunteers from the Community of Sant’Egidio on Wednesday.

“Last Jan. 20, a few meters from St. Peter’s Square, a 46-year-old Nigerian homeless man named Edwin was found dead because of the cold,” the pope said.

“His story was added to that of many other homeless people who recently died in Rome in the same dramatic circumstances. Let us pray for Edwin.”

He continued: “May we be reminded of the words of St. Gregory the Great, who, when faced with the death of a beggar from cold, said that Masses would not be celebrated that day because it was like Good Friday.”

“Let us think about Edwin. Let us think of what this man, 46 years old, felt in the cold, ignored by all, abandoned, even by us. Let us pray for him.”

According to the news website RomaToday, Edwin was the fourth homeless person to die this year in Rome, where there are an estimated 8,000 homeless people. Many sleep along the edge of Bernini’s colonnade, the semi-circular columns enclosing St. Peter’s Square.

Pope Francis gave the Angelus address via livestream in the library of the Apostolic Palace, where the prayer has taken place since a resurgence of the coronavirus pandemic in Italy.

He attended the event despite being forced to cancel three other public appearances on Sunday and Monday due to a resurgence of nerve pain that struck him at the end of 2020.

He did not appear to be in pain as he gave the address standing before a lectern and frequently improvising his remarks.

The pope reflected on Sunday’s Gospel reading, Mark 1:14-20, in which Jesus takes up the call to repentance first issued by St. John the Baptist. He said that Christ’s message contained two fundamental themes: time and conversion.

“The time of salvation is fulfilled because Jesus has arrived. However, salvation is not automatic; salvation is a gift of love and as such offered to human freedom,” he said, noting that to receive this gift we must be open to conversion.

He explained that an opposing force — sin — encourages us to affirm ourselves at the expense of others and God. This worldly mentality, he said, leads to deception and violence.

In contrast, Jesus invites us to recognize our need for God and his grace.

The 84-year-old pope said: “For each of us, the time in which we can welcome redemption is short: it is the duration of our life in this world. It is short. Maybe it seems long…”

He recalled giving the last rites to a “very good elderly man.”

“This is how we, the elderly, feel that life has flown away. It’s gone. And life is a gift of the infinite love of God, but it is also a time of verification of our love for Him. Therefore, every moment, every moment of our existence, is a precious time to love God and to love our neighbor, and thus enter eternal life.”

The pope stressed that each phase of our lives can be “a privileged moment of encounter with the Lord.”

“Dear brothers and sisters, let us be careful and not let Jesus pass by without receiving him. St. Augustine said, ‘I am afraid when the Lord passes by.’ Afraid of what? Of not recognizing him, of not seeing him, of not welcoming him.”

“May the Virgin Mary help us to live each day, each moment as the time of salvation, in which the Lord passes and calls us to follow him. And may she help us to convert to from the mentality of the world to that of love and service.”

After reciting the Angelus, the pope noted that Jan. 24 is the Sunday of the Word of God. He was unable to celebrate a morning Mass marking the occasion in St. Peter’s Basilica due to sciatica. The Mass was offered instead by Archbishop Rino Fisichella, president of the Pontifical Council for Promoting the New Evangelization.

But the Holy See press office said on Jan. 24 that the pope was able to give a special edition of the Bible to people representing various states of life in the Catholic Church. The presentation took place at the pope’s residence, the Casa Santa Marta, instead of at the Basilica, as had been planned.

Speaking after the Angelus, the pope said: “This Sunday is dedicated to the Word of God. One of the great gifts of our time is the rediscovery of Sacred Scripture in the life of the Church at all levels.”

“Never before has the Bible been so accessible to all: in all languages and now also in audiovisual and digital formats. St. Jerome, whose 16th centenary of death I recently commemorated, says that ignorance of Scripture is ignorance of Christ.”

He thanked parishes for helping people to listen to God’s word and urged Catholics to carry a small edition of the Gospels in their pocket or purse.

The pope also noted that the annual Week of Prayer for Christian Unity ends on Jan. 25 with vespers at the Basilica of St. Paul Outside the Walls in Rome. He will not attend the event because of sciatic pain, but he invited Catholics to join in the occasion spiritually through prayer.

Pope Francis then recalled that his message for this year’s World Communications Day was published the day before on Jan. 23,

He said: “Today is also the memorial of St. Francis de Sales, patron saint of journalists. Yesterday, the message for World Communications Day was released, entitled ‘“Come and See”: Communicating by Encountering People as They Are.’”

“I urge all journalists and communicators to ‘come and see,’ even where no one wants to go, and to bear witness to the truth,” he said.

The pope concluded by greeting families that are currently struggling.

“Courage, let us go forward! Let us pray for these families, and let us be as close to them as possible,” he said.

Vatican Archbishop: Turn Off Your...

This Bible Verse Was Hidden in the...