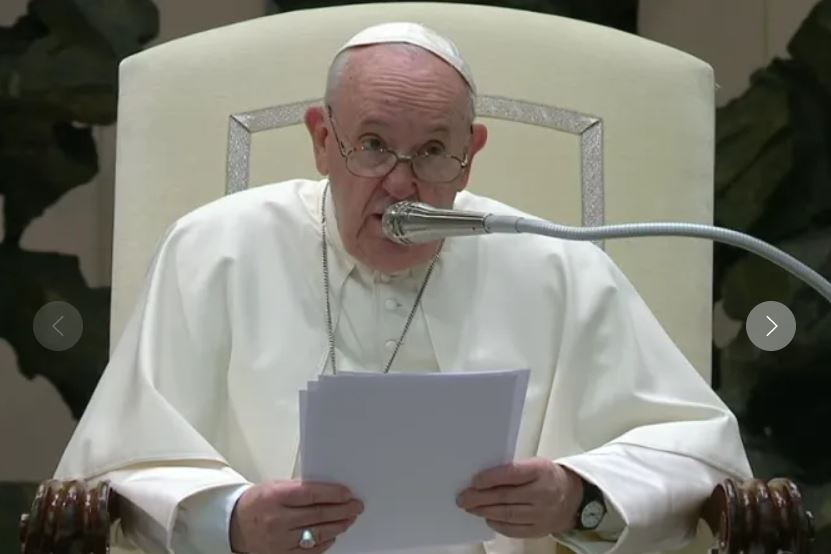 Pope Francis prayed on Wednesday for workers “crushed by an unbearable burden” amid the COVID-19 recession.

At his Jan. 12 general audience in the Vatican’s Paul VI Hall, the pope asked for a moment’s silence for workers who took their lives after losing their jobs amid the pandemic.

“Many young people, many fathers and mothers, experience the ordeal of not having a job that allows them to live tranquilly, they live from day to day. And how often the search for work becomes so desperate that it drives them to the point of losing all hope and the desire to live,” he said.

“In these times of pandemic, many people have lost their jobs — we know this — and some, crushed by an unbearable burden, reached the point of taking their own lives. I would like to remember each of them and their families today.”

“Let us take a moment of silence, remembering these men, these women, who are desperate because they cannot find work.”

The pope dedicated his live-streamed general audience to St. Joseph the carpenter, in the seventh installment in his cycle of catechesis on Jesus’ foster father, which he launched in November.

He noted that the Gospel writers Matthew and Mark described Joseph as a “carpenter” or “joiner.”

He said: “The Greek term ‘tekton,’ used to specify Joseph’s work, has been translated in various ways. The Latin Fathers of the Church rendered it as ‘carpenter.’”

“But let us bear in mind that in the Palestine of Jesus’ time, wood was used not only to make plows and various pieces of furniture, but also to build houses, which had wooden frames and terraced roofs made of beams connected with branches and earth.”

“Therefore, ‘carpenter’ or ‘joiner’ was a generic qualification, indicating both woodworkers and craftsmen engaged in activities related to construction.”

The pope explained that Joseph’s trade, which he passed on to Jesus, did not provide the Holy Family with “great earnings.”

He said: “This biographical fact about Joseph and Jesus makes me think of all the workers in the world, especially those who do grueling work in mines and certain factories; those who are exploited through undocumented work; the victims of labor — we have seen a lot of this in Italy recently; the children who are forced to work and those who rummage among the trash in search of something useful to trade…”

The pope said it was a social injustice when men and women were unable to earn money to feed their families, stressing that labor is connected to human dignity.

He explained that work was not only a way of earning a living, but also “an essential component of human life, and even of the path of sanctification.”

At times due to the pandemic, many people experience the ordeal of not having a job that allows them to live tranquilly. Often they become so desperate that it drives them to the point of losing all hope and the desire to live. Let us #PrayTogether for them.

“Unfortunately, however, labor is often a hostage to social injustice and, rather than being a means of humanization, it becomes an existential periphery. I often ask myself: With what spirit do we do our daily work? How do we deal with fatigue? Do we see our activity as linked only to our own destiny or also to the destiny of others?” he asked.

He added: “It is good to think about the fact that Jesus himself worked and had learned this craft from St. Joseph. Today, we should ask ourselves what we can do to recover the value of work; and what contribution we can make, as the Church, so that work can be redeemed from the logic of mere profit and can be experienced as a fundamental right and duty of the person, which expresses and increases his or her dignity.”

After the address, a precis of the pope’s catechesis was read out in seven languages. After each summary, he greeted members of each language group.

He said: “I greet the English-speaking pilgrims and visitors taking part in today’s Audience, especially those from the United States of America. Upon all of you, and your families, I invoke the Lord’s blessings of joy and peace. God bless you!”

The audience concluded with the recitation of the Our Father and the Apostolic Blessing.

The pope ended his address by reciting a prayer offered by his predecessor Paul VI on May 1, 1969:

O St. Joseph,
Patron of the Church!
You, who side by side with the Word made flesh,
worked each day to earn your bread,
drawing from Him the strength to live and to toil;
you who experienced the anxiety for the morrow,
the bitterness of poverty, the uncertainty of work:
you who today give the shining example,
humble in the eyes of men
but most exalted in the sight of God:
protect workers in their hard daily lives,
defending them from discouragement,
from negative revolt,
and from pleasure-loving temptations;
and keep peace in the world,
that peace which alone can ensure the development of peoples
Amen.

Why did Pope Francis visit a recor...