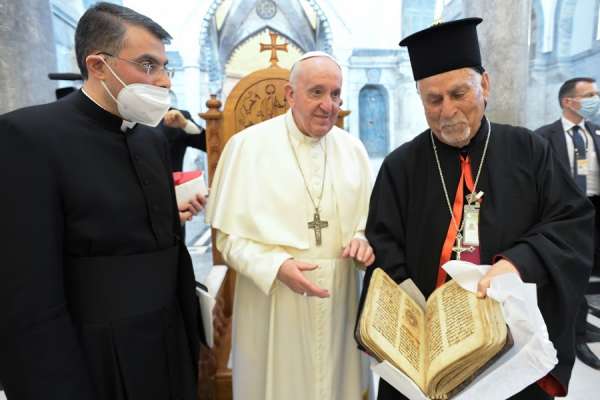 Rome Newsroom, Mar 8, 2021 / 06:05 am (CNA).- During his trip to Iraq, Pope Francis returned a historic Aramaic prayer manuscript which was restored after the Islamic State desecrated the Catholic church where it was once held.

Dating back to sometime between the 14th and 15th century, the book contains liturgical prayers in Aramaic for the season of Easter in the Syriac tradition.

The manuscript was formerly kept in the Great Al-Tahira Immaculate Conception Church (pictured below), in Bakhdida, also known as Qaraqosh. The Syriac Catholic church was plundered and set alight when the Islamic State had control of the town from 2014 to 2016.

Pope Francis visited the church on March 7 and prayed the Angelus with the local Christians from towns and villages across the Nineveh Plains. The church was completely restored by Aid to the Church in Need.

While visiting the Immaculate Conception Church, the pope presented the manuscript to Syrian Catholic Archbishop Yohanna Boutros Mouche of Mosul.

The book was discovered in northern Iraq in January 2017 by journalists — when Mosul was still in the hands of Islamic State — and sent to the local bishop, Archbishop Mouche, who entrusted it to a federation of Christian NGOs for safekeeping.

It had been hidden in the basement of the church together with other important books shortly before fleeing the city, but ended up in Erbil before being sent overseas for restoration.

The Central Institute for the Conservation of Books (ICPAL) in Rome oversaw the restoration of the manuscript, which was funded by the Italian Ministry of Cultural Heritage.

The 10-month restoration process involved consultation with experts at the Vatican Library, which has Syriac volumes dating back to the same period. The only original element of the book that was replaced was the thread that binds it together.

Pope Francis was presented with the restored liturgical text by a small delegation in the library of the Apostolic Palace a few weeks before his trip to Iraq.

The delegation included the head of the restoration laboratory of ICPAL, Archbishop Luigi Bressan, the retired archbishop of Trento, and the leader of the Federation of Christian Organizations in International Voluntary Service (FOCSIV), the Italian federation of 87 NGOs that helped to ensure the book’s safety when it was found in northern Iraq.

Ivana Borsotto, president of FOCSIV, was among the delegation. She said in a statement released March 7 that the return of the book is symbolic of the return of Christians to their homes after the genocide perpetrated by the Islamic State.

“To bring it home and ensure that Pope Francis could — in this historic and important journey to this land — return the Sidra [the prayer book] to the faithful and to its church has a strong symbolic value of the return and recovery of common roots in places where war not only destroyed but tried to eradicate traditions and … erase any trace of remembrance … of the history of peaceful coexistence of Christianity present for centuries in these places,” Borsotto said.

“The work carried out all together to ensure that Sidra returned home is also the expression of the positive role that international cooperation plays in different parts of the world: to promote the development of people, but also to foster cohesion and the growth of territories and communities in order to make populations self-sufficient and autonomous,” she added.

“Without books, there is no community and without this, there can be no history of a people and its culture.”

The Rehabilitation of the First Pa...