Pope Francis to anti-pedophilia group: ‘Your work is more necessary than ever’ 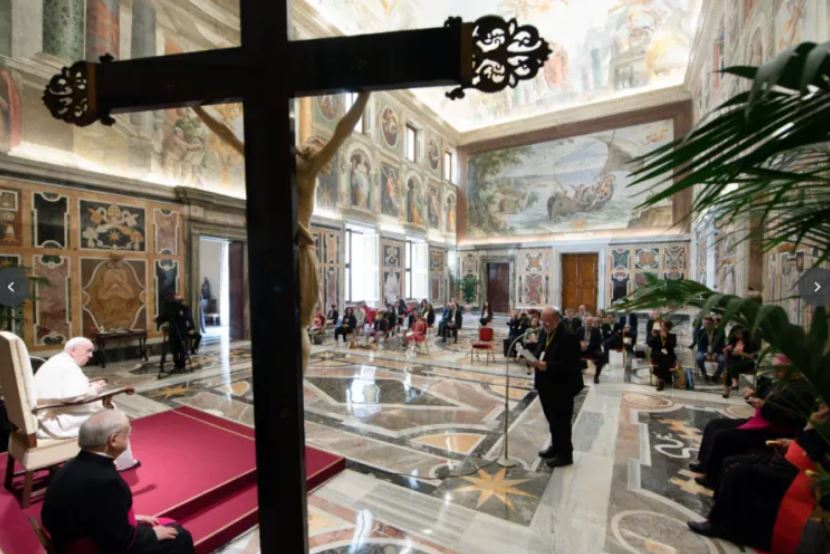 Pope Francis to anti-pedophilia group: ‘Your work is more necessary than ever’

Pope Francis meets with members of the Meter association in the Vatican’s Clementine Hall, May 15, 2021. / Vatican Media.

Pope Francis told an anti-pedophilia group Saturday that its work is “more necessary than ever.”

Speaking to members of the Meter association in the Vatican’s Apostolic Palace on May 15, the pope noted that the internet is facilitating child abuse.

He said: “Your work is more necessary than ever because, unfortunately, the abuse of children continues. I refer in particular to the solicitations that take place through the internet and the various social media, with pages and portals dedicated to child pornography.”

“This is a scourge that, on the one hand, needs to be addressed with renewed determination by institutions, and, on the other hand, requires an even stronger awareness on the part of families and the various educational agencies.”

He added: “Even today we see how often in families, the first reaction is to cover everything up; a first reaction that is always there in other institutions and even in the Church. We have to fight with this old habit of covering up. I know that you are always vigilant in protecting children even in the context of the most modern media.”

The Guardian newspaper reported in February that the rapidly expanding volume of child abuse material online is threatening to overwhelm U.K. police.

It said that the U.K.’s child abuse image database contained 17 million unique images, with half a million more added every two months.

In his address, the pope noted that the Meter association, based in the city of Avola, Sicily, dates back to 1989, “when few people talked about this scourge.”

Fr. Fortunato Di Noto, the association’s founder, decided to dedicate his life to combating abuse in the late 1980s when he first became aware of the exploitation of minors on the internet as a student at Rome’s Pontifical Gregorian University.

He began sharing his research with police around the world, leading to hundreds of arrests and the liberation of abused children. He formally established the association in 1996.

The pope said: “Over the years, with your generous work, you have contributed to making visible the Church’s love for the smallest and most defenseless. How often, like the Good Samaritan of the Gospel, have you reached out with respect and compassion, to welcome, console and protect!”

“Closeness, compassion, and tenderness: this is God’s style. How many spiritual wounds you have bound up! For all this, the ecclesial community is grateful to you.”

Describing child abuse as a form of “psychological murder,” the pope said that all states had a duty to protect the young and identify traffickers and abusers.

“At the same time, denunciation and prevention in the various spheres of society — schools, sports, recreational and cultural organizations, religious communities, and individuals — are more than ever a duty,” he said.

Concluding his address, the pope reflected on the association’s logo, which features a large letter “M” drawn by children evoking the idea of a womb. Inside the “M” are 12 stars, symbolizing the Virgin Mary’s crown.

He said: “She, a caring mother, fully intent on loving her Son Jesus, is a model and guide for the entire association, encouraging us to love with evangelical charity the children who are victims of slavery and violence.”

“Charity towards our neighbor is inseparable from the charity that God has for us and that we have for him. For this reason, I urge you always to root your daily activity in your daily relationship with God: in personal and community prayer, in listening to his Word, and above all in the Eucharist, the sacrament of unity and bond of charity.”

There and Back Again Through Tolki...