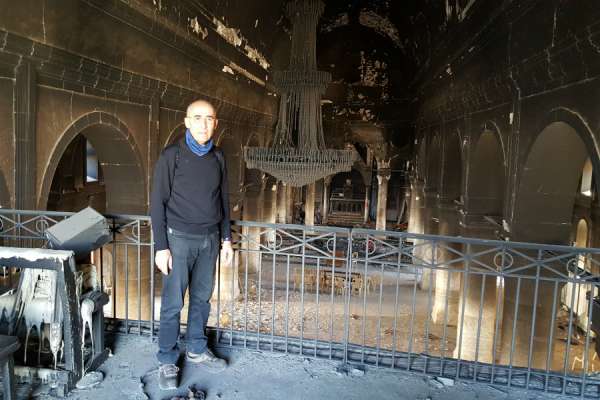 Rome Newsroom, Feb 8, 2021 / 12:10 pm (CNA).- The Great Al-Tahira Immaculate Conception Cathedral in Bakhdida was charred black inside after the Islamic State set it aflame after taking control of the town in 2014. Now the restored cathedral is preparing to welcome Pope Francis during his trip to Iraq next month.

Pope Francis is set to be the first pope to visit Iraq. His four-day trip to the country March 5-8 will include stops in Baghdad, Mosul, and Bakhdida (also known as Qaraqosh).

The cathedral that the pope will visit in Bakhdida, served a growing Christian community, until the Islamic State turned the cathedral into an indoor shooting range from 2014-2016.

After the town’s liberation from the Islamic State in 2016, Masses resumed in the damaged cathedral as Christians returned to rebuild their community. Aid to the Church in Need committed to restore completely the cathedral’s fire-damaged interior in late 2019.

“I think it is very important to support this town because it is the biggest symbol of Christianity in Iraq. Until now, we kept it as a Christian city, but we do not know what the future will bring for us,” Fr. Georges Jahola, a parish priest from Bakhdida, told CNA in 2019.

A new Marian statue sculpted by a local Christian artist was placed atop the bell tower of the Immaculate Conception Cathedral in January.

Pope Francis is slated to pray the Angelus at this cathedral in the schedule for the papal trip to Iraq published by the Vatican Feb. 8.

The schedule released by the Vatican also confirms that the pope will meet with Ali al-Sistani, leader of Shia Muslims in Iraq, during his visit.

Upon his arrival at Baghdad International Airport, the pope is scheduled to meet with Iraqi Prime Minister Mustafa Al-Kadhimi before visiting Iraqi President Barham Salih at the presidential palace March 5.

The pope will end his first day at the Syriac Catholic Cathedral of Our Lady
of Salvation in Baghdad, where he will address the local bishops, priests, religious, and other Iraqi Catholics.

On his second day in Iraq, Pope Francis will travel on Iraqi Airways to Najaf to meet with al-Sistani.

The pope will then travel to the plain of Ur in southern Iraq, which the Bible records as the birthplace of Abraham. In Ur, the pope will give a speech at an interreligious gathering March 6 before heading back to Baghdad to offer Mass at the Chaldean Cathedral of Saint Joseph.

Pope Francis will visit Christian communities in the Nineveh Plain on his third day in Iraq. These communities were ravaged by the Islamic State from 2014 to 2016, causing many Christians to flee the region. The pope has repeatedly expressed his closeness to these persecuted Christians.

The pope will first be welcomed at the Erbil Airport March 7 by the religious and civil authorities of Iraqi Kurdistan before traveling to Mosul to pray for the victims of war at Hosh al-Bieaa square.

According to the schedule, the pope will then visit the local Christian community in Bakhdida at the Immaculate Conception Cathedral, where he will pray the Angelus.

On his last evening in Iraq, Pope Francis will offer Mass at a stadium in Erbil March 7 before departing from Baghdad International Airport the following morning.

Pope Francis said Feb. 8 that he is looking forward to resuming his apostolic visits. His visit to Iraq will be the pope’s first international trip in over a year due to the coronavirus pandemic.

“These visits are an important sign of the solicitude of the Successor of Peter for God’s People spread throughout the world and the dialogue of the Holy See with states,” Pope Francis said.