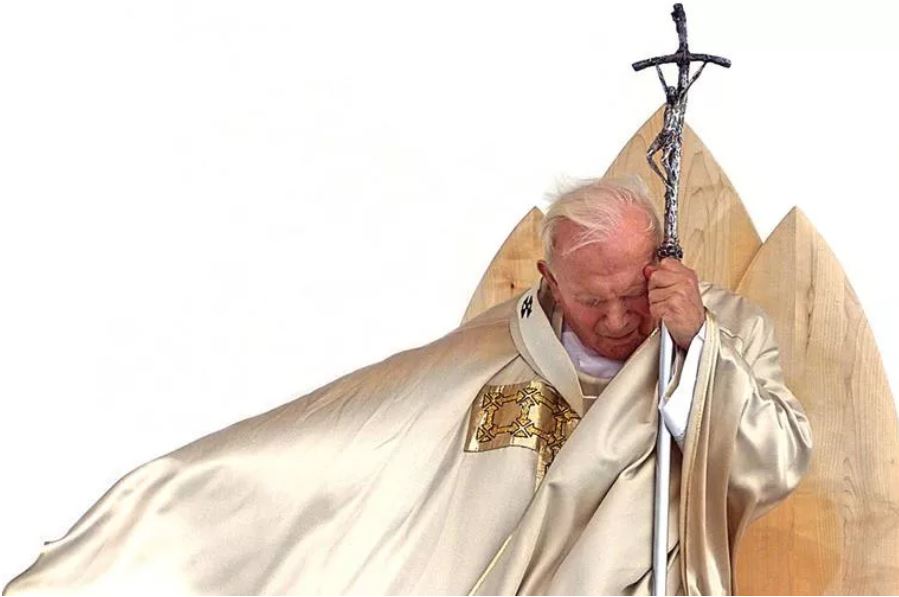 The crosses I was bearing — depression and M.S. — were crushing me, but here was the Pope himself telling me to unite my suffering with Christ.

But I wasn’t there for the climate or a tan. I was there to see Pope John Paul II on his swing through the southwestern United States — a Catholic convert’s pilgrimage to honor the Vicar of Christ, but also a pilgrimage of healing after a string of personal misfortunes.

A year back, I had been KO’d by a clinical depression that triggered an abrupt retreat from my do-gooder life in Chicago. Then, within a couple months of moving back home with my folks, I came down with some odd paresthesias — numbness and tingling — that drove me to a neurologist for diagnosis. “You have multiple sclerosis,” she told me after examining my MRI results.

“Get air conditioning in your car,” she said. “Heat can lead to exacerbations.”

That was it — there were no treatments or meds back then to help mitigate M.S. I thought it was the end of my life — certainly the end of my dream to become a priest — and when I heard the Holy Father was going to be in Arizona, I was determined to get there and see him.

To help facilitate matters (and cut down on costs), I re-connected with my brother’s high-school chum, Scott, who was doing graduate work at Tempe’s Arizona State University — home of Sun Devil Stadium where the Pope would be celebrating Mass. When I reached out to Scott to ask if I could crash with him for the papal event, he not only agreed, but also insisted on participating himself.

“Really?” I asked him, knowing he’d grown up Presbyterian like me.

“Absolutely,” Scott replied without hesitation. “I mean, he’s God’s righthand man — I want to see him, too.”

Maybe it wasn’t the most precise description of the pope’s ecclesial role, but it was close enough for my Protestant pal, and I was glad he was so enthusiastic. So, I booked a flight and packed my bags.

It was an exceptional excursion in many respects, and certainly a rejuvenating one — both spiritually and physically. Spiritually, the journey was everything I’d hoped it would be — practically a retreat. The Holy Father’s appearance at numerous public events was inspiring, and between events I had plenty of time for prayerful recollection (thanks to Scott’s gracious hospitality).

The physical recharging, on the other hand, was a surprise. You see, Scott rarely drove at the time; instead he got around almost exclusively by bicycle — and not the sleek Schwinn of youthful memory, either. “It’s called a ‘cruiser,’” Scott said of his chunky, single-speed two-wheeler with the balloon tires. “There are no hills here, so you really don’t need a ten-speed.” That made sense to me, so, dismissing the advice of my neurologist, I borrowed Scott’s backup cruiser and braved the sweltering heat.

Truly, it was exhilarating — the perfect physical complement to the spiritual workout that went along with stalking a saintly pontiff. We embraced the sun and the sweat, bare-chested and beaming, as the paltry price we had to pay for such a rare privilege. Besides, the cruising paid dividends in cementing my friendship with Scott as well as restoring my confidence in my health and, consequently, giving me hope for the future.

But the biggest dividend was wholly unexpected. Scott and I had scanned the news for clues to when and where we could glimpse the pope off the beaten track. The day of his arrival, and based on our best guesses, we hopped on our cruisers and hightailed it along the Grand Canal Trail, keeping our fingers crossed that we’d luck out.

Then it happened. The road parallel to the canal had a sudden break in traffic. There were motorcycles, then big sedans, then a long dark limousine — the Pope’s motorcade! Scott and I stopped and yelped and waved our shirts around — and there he was! A figure clad in white, peering from the back seat. He grinned, nodded, waved — and sat back again.

I was ecstatic — so was Scott. Nobody else was around, so we knew John Paul had looked at us, had waved at us — or was it a mini blessing? Who cares! It was an unmistakable, direct connection with God’s righthand man!

As great as that moment was, the real highlight of the trip was the big Mass in the stadium. It was the Feast of the Triumph of the Cross, and so an ideal liturgical setting for a papal celebration of the Anointing of the Sick. “By means of this sacrament, and through all her pastoral service, the Church continues to care for the sick and dying as Jesus didduring his earthly ministry,” the Pope said in his homily. “They are enabled to bear their sufferings with courage and thus to embrace the Cross and follow after Christ with stronger faith and hope.”

There I was, Scott at my side, surrounded by thousands of Sun Devils and citizens, and it was like the Pope was talking to me — to me! As if his homily was a follow-up to his glance and grin along the canal. The crosses I was bearing — the unremitting depression, the M.S. — were crushing and disillusioning, but here was Peter himself telling me to take heart, press ahead, and anticipate transformation: My suffering could be a means to an end if it could be joined to Christ’s.

It’s an upside-down view of weakness and infirmity — one that prioritizes the proper use of sickness ahead of its cure. A few years earlier, the Holy Father made the same point in his Apostolic Letter, Salvifici Doloris. “At one and the same time Christ has taught man to do good by his suffering and to do good to those who suffer,” he wrote. “In this double aspect he has completely revealed the meaning of suffering.”

I didn’t have the privilege of receiving an anointing from John Paul that evening, but hearing his voice, hearing his calm confidence in Christ, was itself a powerful balm, which was ratified by the Eucharistic celebration. As Scott and I left the stadium and biked home, I pondered the Pope’s exhortation about doing good and its link to suffering — a link that seemed obscure and out of reach, but still compelling, still possible. How could I have known that, with God’s grace, I’d rise above the depression and M.S. and become a nurse in time, doing my best to alleviate the suffering of others, striving to bring Christ to their bedside through my care.

But you don’t have to be a nurse to put the Pope’s words into action, for it happens in the will mainly — an interior decision to unite our suffering with Christ’s, no matter our situation, no matter our prognosis or condition. It’s an interior decision that I elect to renew every day in my morning offering, for I know that my current wellbeing is not guaranteed indefinitely.

And someday, when I’m faced with debility, disease and ultimately death, I pray I’ll get to relive my roadside encounter with St. John Paul — to return his grin, nod and wave, God willing, and then sit back in the arms of the Father. A pilgrimage come full circle — and the cusp of a new adventure.