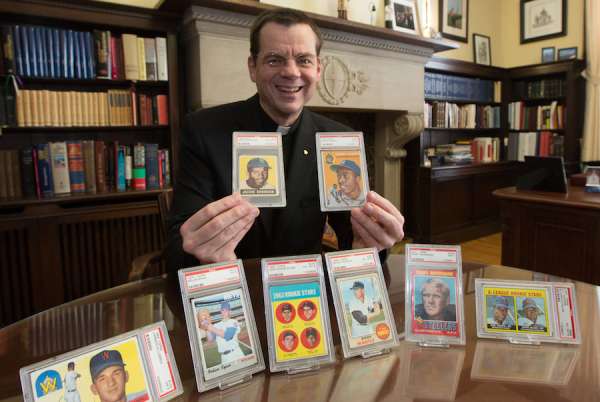 St. Paul, Minn., Mar 11, 2021 / 12:53 am (CNA).- A baseball card collection worth thousands of dollars was a split second away from being dropped into a trash can and disappearing forever in a landfill.

Father John Ubel, rector of the Cathedral of St. Paul in St. Paul, recalled that moment, which took place more than 15 years ago when he was transferred to a different priestly assignment and wanted to purge some of his belongings. He wasn’t sure what to do with a box containing hundreds of cards in mint condition from the 1970s, including Minnesota Twins players like Tony Oliva and Rod Carew.

“Every time you move assignments, it’s a great opportunity to divest yourself a bit,” he said. “I literally had them out at the trash, and changed my mind and brought them back in.”

Eventually, he began to add more to the collection, and now estimates its value at more than $25,000. Soon, he will make good on his urge to get rid of the cards. But this time, instead of a trash can, they will go to avid collectors, and the proceeds given to the Aim Higher Foundation, where he serves on the board of directors. The nonprofit organization gives scholarships to low-income students at Catholic elementary schools in the Archdiocese of St. Paul and Minneapolis. Students are chosen to receive $1,000 every year they are enrolled in a Catholic school, all the way through eighth grade. The total per student can be as high as $9,000 if they qualify when they are in kindergarten.

Father Ubel is organizing an online auction for the weekend of March 12-14, the fourth Sunday of Lent, Laetare Sunday. He was inspired to sell his collection after watching how Catholic schools have courageously offered in-person learning despite the global COVID-19 pandemic, which has kept many public schools’ doors closed since it spread into Minnesota in March 2020. After closing last spring and converting to distance learning, schools in the archdiocese opened up for in-person learning at the start of this school year. Teachers, administrators, students and parents share the passion and the extra work and expense needed to teach students in the classroom.

Father Ubel has not only noticed their efforts, but stepped up to the plate to support them.

“I thought to myself, (Catholic) schools are hitting it out of the park,” he said. “And, I thought, it’s time to give something back.”

He has more than 2,000 cards, but will focus on the most valuable — about 50 — at the auction. Two big sellers are expected to be a 1948 Jackie Robinson rookie card and a 1954 Hank Aaron rookie card. Father Ubel said the Robinson card is worth more than $15,000 and the Aaron card about $6,000, although the latter figure is continuing to climb since the slugger’s death Jan. 22. Nicknamed “Hammerin’ Hank,” Aaron played for 23 seasons and set the all-time home run record with 755 career round-trippers.

Robinson was known for breaking the color barrier in becoming the first African American player in the Major Leagues (in 1947 with the Brooklyn Dodgers). Father Ubel especially cherishes the card for that reason, and notes that Aaron, likewise, faced racial discrimination, most notably while chasing Babe Ruth’s record of 714 home runs, which had stood for nearly four decades and was thought impossible to break. But, break it Aaron did April 8, 1974, on his home field in Atlanta against the Los Angeles Dodgers. There were baseball fans who did not want a Black player breaking Babe Ruth’s home run record, which had become sacred. That fateful night in Atlanta created controversy.

“I watched that game,” recalled Father Ubel, who was 10 years old at the time. “I remember it very well. I’m glad that he hit it in the fourth inning because I probably would have had to get to bed if it was much later than that. And, to think that he had death threats and people leaving (hateful) messages.”

Father Ubel first started collecting cards in 1970 while in the first grade at Visitation School in Mendota Heights. He bought most of his cards between 1970 and 1974. After transferring to St. Thomas Academy in Mendota Heights, his interest waned. The cards were stored in a Girl Scout cookie box in the attic of his home for a number of years before he eventually retrieved them and started taking them wherever he went. He later “acquired” his brother’s football card collection, which is why he has Terry Bradshaw (Pittsburgh Steelers) and Joe Namath (New York Jets) cards, both of which will be sold at the auction.

After graduating from St. Thomas Academy in 1981, Father Ubel, 57, went on to St. John Vianney College Seminary at the University of St. Thomas in St. Paul, and, eventually, the St. Paul Seminary, as he followed his call to the priesthood. He was ordained in 1989 and made stops to different assignments with the cards still stored in the same cardboard box. He added the Aaron card in 2009 and the Robinson card in 2010, as he chose to step up his interest in collecting. He eventually placed his most valuable cards in plastic sleeves, and they are in mint condition today.

The reason he fell in love with baseball is simple.

“It’s the only sport I ever really played,” he said. “I like to joke that my claim to fame is we won the city championship at Nativity in ’77. I sat on the bench, but I coached first base and nobody got picked off whenever I was coaching first base.”

The reason he fell in love with baseball cards is equally simple.

“This is nostalgia, and it brings you right back,” he said. “I can look at this Nolan Ryan (Hall of Fame pitcher) card and remember watching (him play). He’s the first one I remember (throwing a) 100-mile-an-hour fastball. … And, I’ve got his card. So, there’s something about nostalgia and memory. And, I think memory is very powerful, and memory is very compelling. It brings us back to a simpler time.”

In a matter of seconds, as Father Ubel peruses his cards, he is transported back to the days when the Twins played at Metropolitan Stadium in Bloomington, which was torn down in 1985 and replaced with the Mall of America in 1992.

“These are my heroes,” he said of Twins players from that era. “I remember I was in eighth grade when Rod Carew was chasing .400 (batting average). He hit .388 in 1977. That whole summer, I was listening to (Twins games on) WCCO Radio every day. Back then, they didn’t have the games on TV all the time. You had to go to the radio. … Listening to a game on the radio forced you to have a mental image. It helped with your imagination. It was a simpler time.”

For sentimental reasons, it would be understandable for Father Ubel to want to keep his collection. He does admit there’s a tug on his heart to do so, which creates tension surrounding his decision to let go.

“On a human level, I don’t want to part with these,” he said, “but I also think there are other needs right now that in my life are more important. And, the benefit I received from a Catholic education is really immeasurable to me — my whole life, from kindergarten all the way through seminary and beyond. And, to me, it’s time (to sell the cards). I just felt the Lord speaking to me. You know, Matthew 19 (verse 21): ‘Go, sell what you have.’ It’s time. It’s time to do something and to give back.”

For more information on the auction, visit aimhigherfoundation.org.

This story originally appeared in The Catholic Spirit, newspaper of the Archdiocese of St. Paul and Minneapolis. Republished here with permission.