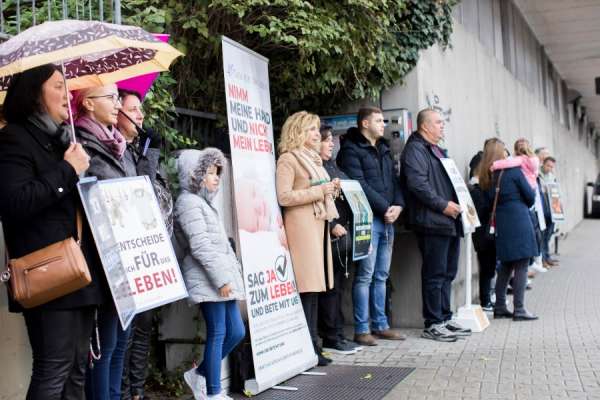 CNA Staff, Feb 17, 2021 / 03:00 am (CNA).- Pro-life activists are challenging a German municipality’s decision to ban them from praying in front of a pre-abortion advisory center.

Members of the 40 Days for Life in Pforzheim, southwest Germany, are taking the challenge to a national court.

Pavica Vojnović, who has led prayer vigils outside the Pro Familia advice center, said: “I want to be there to pray, not for myself, but for the vulnerable women contemplating abortion, and for their unborn children.”

“This topic really touches my heart, as I know the pain of losing a child. Our society must offer better to mothers in difficult situations. Every life is valuable and deserves protection. Surely a simple prayer for the vulnerable cannot be banned?”

David Bereit founded 40 Days for Life in 2004 as a local pro-life advocacy group in Bryan-College Station, Texas. The group has grown into an international organization, holding Christian campaigns of prayer and activism to end abortion.

Over 40 days, participants hold a 24/7 prayer vigil outside of a single abortion facility in the community. The organization also engages in community outreach, through partnerships with churches and door-to-door petitions.

Vojnović said that she was shocked in 2019 to learn that the local municipality had denied permission for the group to hold vigils near the center.

Twice a year, around 20 people had gathered to pray for 40 days for women facing abortion and their unborn children. Vigil participants did not prevent anybody from entering the building or block the pavement in the surrounding area.

When the advisory center asked police to monitor the activists, they found no violations. But the center’s management asked that the vigil be moved some distance away or banned altogether.

Vojnović’s legal challenge is supported by the group ADF International, which believes that the ruling violates the freedom of speech, assembly, and religion.

“By prohibiting even silent prayer near a pre-abortion counseling center, the Pforzheim authorities have gone beyond what could be considered reasonable or proportionate. Freedom of speech is the foundation of every free and fair democracy.”

“Pavica and her group have a deeply held belief on abortion. To hold this belief is a fundamental right, as is the right to express this through peaceful assembly. Whether or not they agree with Pavica’s views, everyone can support the importance of these foundational protections.”