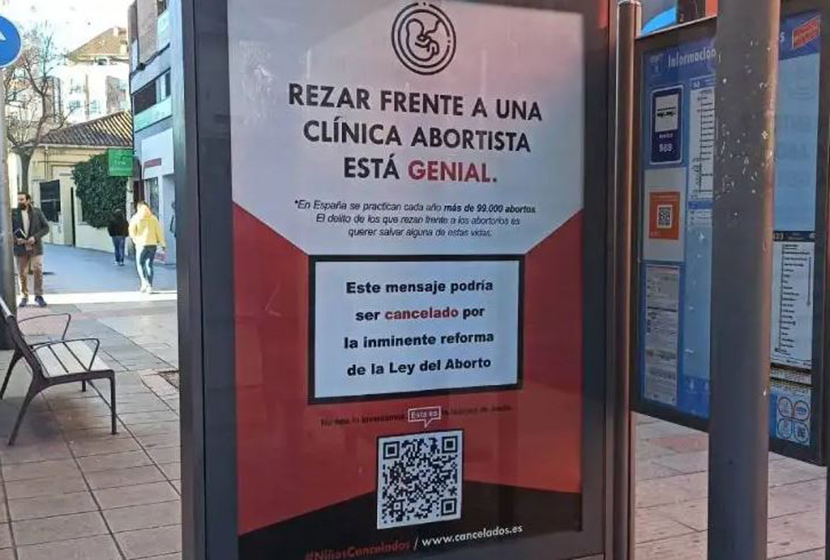 The “Cancelled” campaign ”seeks to combat political correctness, the cancel culture and the repression of freedoms.”

In a Jan. 21 YouTube message, Galdón stated that “the constitutional rights of the Spanish people have been violated by the Murcia City Council.”

Pressure from the abortion lobby has led several Spanish city councils, including those of Valencia, Valladolid, and Murcia to ban the advertisements.

The “Cancelled” campaign opposes a bill being pushed by the ruling Spanish Socialist Workers’ Party which would criminalize “harassing women going to clinics for the voluntary interruption of pregnancy.” Anyone promoting, favoring, or participating in demonstrations near abortion facilities would be subject to penalties.

Penalties for what would be deemed harassment would include jail terms of three months to a year, or community service from 31 to 80 days. Depending on circumstances, an individual could also be barred from a particular location for between six months and three years.

The mayor of Murcia is a member of the PSOE.

“Today the Murcia city government has done a great disservice to our democracy by trampling on the right to freedom of speech, requiring the removal the pro-life posters that until this afternoon could be seen in the streets of Murcia,” Galdón declared.

In opposition to the bill, beginning Jan. 18, 260 posters were placed in ad kiosks on streets and at metro stops in 33 Spanish cities to “raise our voices against prison sentences.”

According to the bill making its way through Spain’s lower house, pro-lifers could be prosecuted without the aggrieved person or their legal representative being required to file a complaint.

The “Cancelled” campaign ”seeks to combat political correctness, the cancel culture and the repression of freedoms.”

The posters read: “Praying in front of abortion facilities is a great thing.” By using a QR code on the poster, the testimony of Dr. Jesús Poveda, one of the main promoters of the pro-life movement in Spain, can be accessed.

The campaign will also include interviews, educational videos, and written material.

The posters state that “more than 99,000 abortions abortions are performed in Spain every year. The crime of those who pray in front of abortion facilities is to want to save some of these lives.”

In his video message, Galdón stated that these efforts to cancel the campaign have trampled on the freedom of speech, “which only seeks to defend the life of the weakest, the unborn.” Galdón told the politicians and those promoting abortion that “you’re not going to silence us, we are growing in the face of injustice.”

Being Ecumenical Is Being Evangeli...