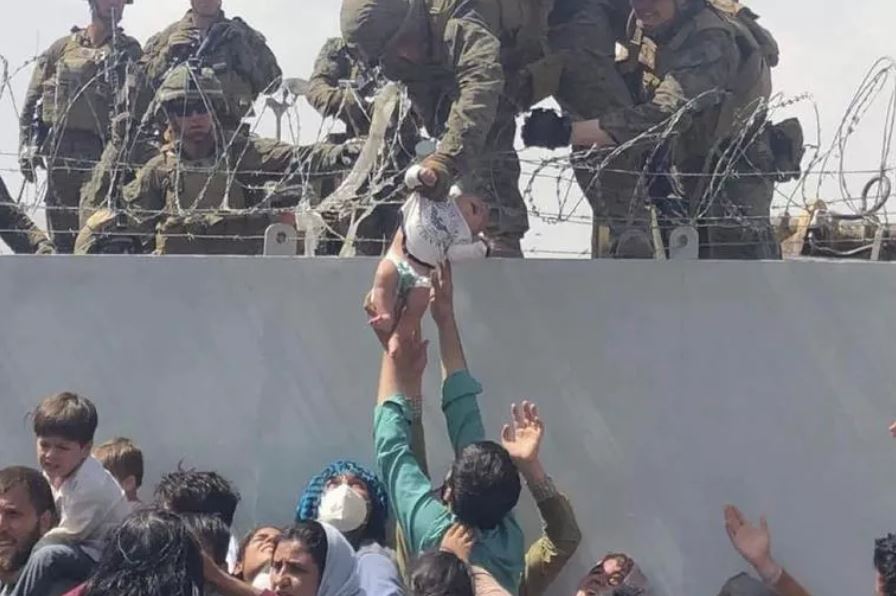 COMMENTARY: We must not turn a blind eye to the desperation of many Afghans today.

Over the past week, America has watched in horror the tragic plight of the people of Afghanistan.

Two images from the past week are impossible to forget. The first was of men clinging to a U.S. military transport plane as it took off from the airport in Kabul. The second is a baby being passed along by a throng of Afghani people outside a security wall and up to fully armored U.S. soldiers. A picture may be worth a thousand words, but only one word comes to mind when seeing these two images: desperation.

In addition to those Afghans who provided support to U.S. and NATO forces, religious minorities are particularly vulnerable.

“There is nothing ‘moderate’ about the new Taliban,” writes Farahnaz Ispahani, a senior fellow at the Religious Freedom Institute, in an opinion piece for The Hill. “Their prejudices and intolerant outlook seem still to be the same as in the past. … Over the last year, we have witnessed dangerous signs that bode ill for Afghanistan’s small and varied religious faiths, numbering Hindus, Christians, Sikhs and Shia Muslim Hazara among them.”

This past Friday, the Higher Committee of Human Fraternity (HCHF), established in 2019 following the signing of the “Document on Human Fraternity” by Grand Imam Ahmed el-Tayeb and Pope Francis, urged “respect for ethnic, linguistic, and religious diversity within the Afghan society, without marginalizing any of its groups, and ensuring equality between all people.”

Amnesty International, too, has voiced concern, demanding that the United Nations protect the thousands of Afghans at serious risk of Taliban reprisals: “We urge the U.N. Security Council to adopt an emergency resolution demanding that the Taliban respect international human-rights law and ensure the safety of all Afghans, regardless of their ethnic background or religious beliefs.” An investigation conducted by the human-rights group found evidence of the slaughter of nine Hazara men just this summer at the hands of the Taliban.

The Hazara killings took place before the Taliban issued a blanket amnesty in Kabul, promising no reprisal killings and safety for all Afghans. The news trickling out of the country, however, tells a different story.

“Afghan Christians are reportedly fleeing to the mountains in a desperate attempt to escape the Taliban, who is going door-to-door trying to kill them,” according to the Daily Wire. The Taliban are “reportedly rifling through people’s phones to look for any apps that would give them away as Christians.”

Catholic News Agency’s Christine Rousselle and Jose Torres Jr. report that Christian leaders and aid organizations believe there is an imminent threat to the Christian community in Afghanistan. They interviewed Thomas Heine-Geldern, executive president of the pontifical charity Aid to the Church in Need, who said that “we can expect that Sunni Islam will be the official religion; sharia law will be reimposed.”

Heine-Geldern continued with an even starker prediction: “The hard-won freedoms for human rights, including a relative measure of religious freedom, over the last 20 years will be revoked.”

This throws a harsh spotlight on President Joe Biden, who brought about the fall of Afghanistan’s government by his abrupt withdrawal of U.S. troops. He recently nominated several people to fill key religion posts within his administration. These nominations and appointments had a strongly partisan flavor.

Rashad Hussain has been tapped by Biden as ambassador-at-large for international religious freedom. If confirmed, he would be the first Muslim IRF ambassador.

During the Obama administration, Hussain specialized in fighting anti-Semitism and protecting religious minorities in Muslim-majority countries. He could be an important ally for Afghans who are unwilling to bend to the Taliban’s radically extreme understanding of Islam. That is if, and it’s a big “if,” Hussain cares more about advancing the cause of religious freedom and protecting the persecuted than in helping Biden promote other policies more in line with the administration’s progressive ideology.

The press is acknowledging what is going on, even when doing so damages the reputation of President Biden. Will the administration be pressed on what it is doing to intervene effectively on behalf of religious minorities (if such a thing is possible)?

President Biden has been terribly evasive when discussing the consequences of his decision to withdraw U.S. troops abruptly. It is most likely that his administration will soft-pedal the whole issue, as drawing the world’s attention to Taliban atrocities will only remind people of the administration’s role in what is happening.

Concerned groups within the federal government are nonetheless raising their voices. One is the United States Commission on International Religious Freedom (USCIRF), “an independent, bipartisan U.S. federal government commission created by the 1998 International Religious Freedom Act (IRFA) that monitors the universal right to freedom of religion or belief abroad.” Nadine Maenza, USCIRF’s chairwoman, commented on EWTN News Nightly that “the imposition of the Taliban’s harsh and strict interpretation of Islam in the areas that they have taken over violates the freedom of religion or belief of Afghans who do not share these beliefs.” The commission recommended earlier this year that the State Department designate the Taliban “an entity of particular concern.” Its recommendation came before the Taliban took over.