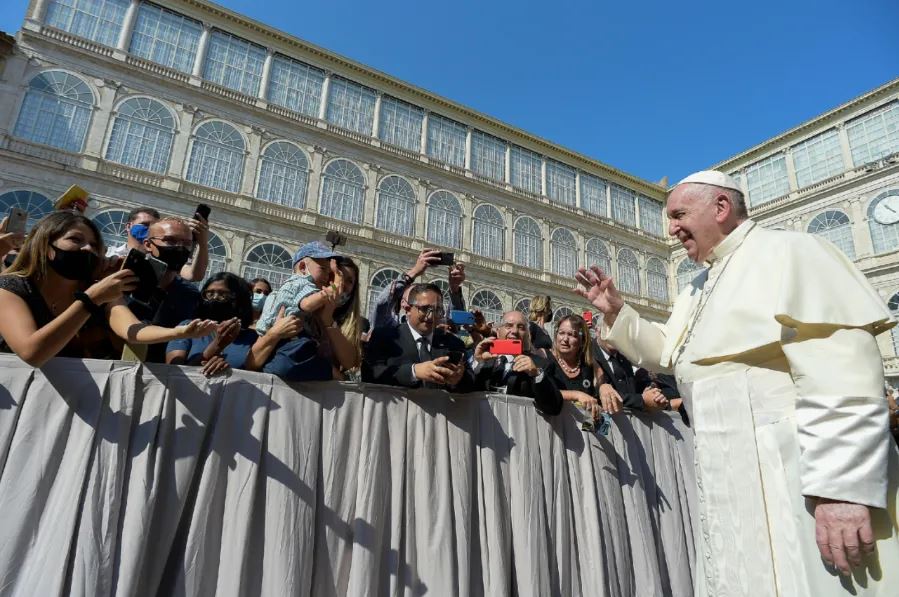 On May 12, pilgrims will be required to observe safety measures to prevent the spread of COVID-19. The last Wednesday audience with the public was on Oct. 28.

Members of the public will be able to attend Pope Francis’ general audience next week after a six-month absence due to the coronavirus crisis.

The Prefecture of the Papal Household announced May 6 that the Pope’s general audience next Wednesday will take place in the San Damaso Courtyard of the Apostolic Palace.

It said that people wishing to attend the May 12 audience will be able to access the interior courtyard via the Bronze Doors, located under the right-hand colonnade in St. Peter’s Square.

Pilgrims will be required to observe safety measures to prevent the spread of COVID-19. The courtyard has a capacity of around 500 or so socially-distanced-and-masked participants.

The Prefecture of the Papal Household said that pilgrims will not need entrance tickets to attend the audience.

General audiences are usually held in either St. Peter’s Square or the Paul VI Audience Hall. But when the pandemic first struck Italy in March 2020, the Pope transferred his general audiences to the library of the Apostolic Palace, where they took place without public access.

The first livestreamed general audience from the library occurred on March 11, 2020.

The Vatican experimented with holding the audiences in the San Damaso Courtyard in September last year. The first audience at the venue with members of the public took place on Sept. 2.

In the following weeks, Pope Francis sometimes sat close to attendees, many of whom he would spend a long time greeting individually before and after the event.

In October, the audiences were transferred to the Vatican’s larger Pope Paul VI Audience Hall, and Pope Francis kept his distance from pilgrims.

The Vatican decided to move the audiences behind closed doors again when a person at the Pope’s Oct. 21 audience tested positive for COVID-19.

Pope Francis held his last Wednesday audience with the public on Oct. 28. He told participants that he would be staying up on the stage and not greeting each of them as he liked to do.

“I would very much like to come down and greet each one of you, but we must keep our distance, because if I come down, then a crowd immediately forms to greet me, and this is contrary to the measures and the precautions we must take in order to face … COVID,” he said.

Starting Nov. 4, the Pope gave his general audience catechesis and greetings via live video from his study in the Apostolic Palace.

At the end of December and through January, Pope Francis also delivered his Sunday Angelus address via livestream.

But in February, he began once again to give the address from a window overlooking St. Peter’s Square, where groups of masked pilgrims typically stand some distance apart from each other to prevent the transmission of the virus.

At the end of his address on Feb. 7, he said: “I am happy to see you again gathered in the square, even those habitué [regulars], the Spanish nuns here, who are always good; come rain or shine, they are there! And also the young people of the Immaculate … all of you. I am pleased.”