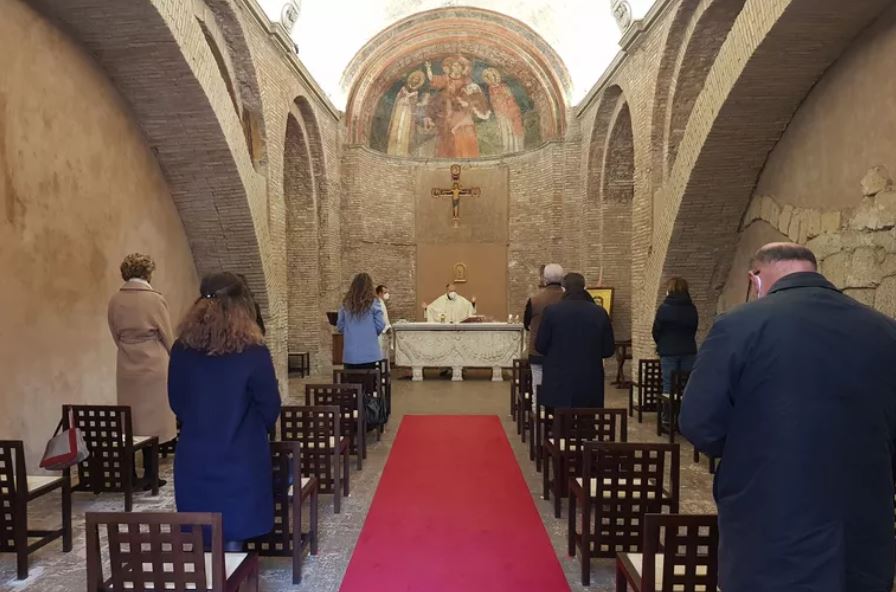 A private Mass is said every day inside the Italian Parliament.

The Register visited the Italian Parliament to get a close-up view of the private Mass celebrated every morning for deputies, senators and their collaborators inside the Parliament.

The Italian Parliament is one of the few, or perhaps the only one, in the world that offers its official members the celebration of Holy Mass every day. “I don’t know of any other parliament where this happens, and I have visited many, at least in Europe,” said Sen. Paola Binetti, who has been a member of the Italian Parliament since 2006.

The celebration takes place mainly during the four days of parliamentary activity: “From Tuesday to Friday we celebrate Holy Mass, and then I remain available for interviews and meetings; we also experience moments of biblical and spiritual catechesis, and we make a pilgrimage abroad every year,” explained Msgr. Francesco Pesce, rector of the Church of St. Gregory Nazianzen at the Chamber of Deputies. St. Gregory Nazianzen Church is the chapel where Msgr. Pesce celebrates Mass each day.

“Mine is first and foremost a spiritual role; that is, of course, available to the Parliament for the sacrament of reconciliation and spiritual direction,” Msgr. Pesce added.

In Italy in recent years, politics has emphasized the separation of Church and state. However, politics and faith can meet, Msgr. Pesce said; in fact, it is expressed in “the height and depth of Italian democracy that enables the presence of a church and a dedicated priest to be in the seat of the Italian Parliament and listen to the word of the Church. Our republic, rightly secular but not secularist, knows how to hold in high honor the contribution that Christianity can give to the building of the common good. The responsibility lies with each one of us. Caring for the common good also means changing the quality of relationships. Words and language are important, especially within institutions, both civil and religious. It is difficult but necessary, in my opinion, to introduce into the political and economic lexicon a term like ‘love,’ which seems not to be part of it. Yet, as Pope Francis teaches, at the basis of a culture of care and responsibility, which knows how to foresee and evaluate the future consequences of one’s actions, lies precisely a ‘civilization of love’ (Laudato Si,  231).”

Politics is a form of service and love, which daily Mass reminds politicians of, said Binetti.

“Meeting Christ daily means retracing his biography through his words, as sober as they are incisive: ‘I came to serve and not to be served’ (Mark 10:45).”

Deputy Maurizio Lupi, member of the Italian Parliament since 2001, told the Register, “I was taught that Christianity is an event that takes the form of an encounter with Jesus Christ and that this changes life. St. Paul speaks of a new creature. This is what I have experienced: I have changed, and I have seen many change. In the Mass, exactly the same thing happens: It is the encounter with a material reality — bread and wine — that takes on a new nature. It is the paradigm of life, what I would like to experience every day. Remembering this every morning helps [me] to face the day and the inevitable mistakes one will make, differently, more humbly and more humanly.”

Msgr. Rino Fisichella instituted the Mass of the Parliamentarians when he was rector of the Church of St. Gregory Nazianzen from 1995 to 2010. “He began to celebrate Holy Mass in the Church of the Chamber on a regular basis, following parliamentary times and rhythms. Then began a long work of formation addressed to people of the Parliament, through the small daily homilies, with a commentary of the Gospel of the day, capable of illuminating the concreteness of the difficulties that politicians must face with their complex parliamentary work,” said Binetti. Archbishop Fisichella is now the president of the Pontifical Council for the Promotion of the New Evangelization.

Deputy Lupi, who remembers well the years when then- Msgr. Fisichella was rector, added, “In addition to the Mass every day, then a weekly catechetical meeting, pilgrimages and cultural meetings were born. I hope that other parliaments around the world will also adopt this service for political representatives who feel a Christian vocation.”

Msgr. Pesce said, “I can say that there really is a belonging to a single community around the altar of the Lord, and it contributes to ironing out certain ‘wrinkles,’ fosters greater knowledge among them, and also creates a fraternal and supportive atmosphere that is not transmitted in the parliamentary hall; often, I would say that the sense of unity comes precisely from fraternity.”

People who see each other every morning at Mass develop friendships outside the world of politics. Binetti said that “it is a place of prayer and reflection, where we also find ourselves sharing difficult moments, such as the loss of a loved one or events tied more deeply to liturgical times: Christmas, Easter.”

This group of deputies and senators who come from all political parties not only share liturgical moments but, over time, have promoted a true Christian vision in political life. “Christianity is in its essence a life, and the characteristic of a living experience is the presence, living men and women, present with all of themselves in the place where they work; for us, the Parliament. We do this with proposals for laws, meetings and seminars that can involve politicians from the various parties, trying to concretely apply a cardinal principle of the social doctrine of the Church, such as the principle of subsidiarity,” explained Deputy Lupi.

The building has undergone considerable transformations over the centuries. In 1870, when most of the buildings of the religious orders passed to the Italian state, the convent was partially used as a depository for the Italian State Archives. Only in the 1970s was it acquired by the Chamber of Deputies and then restored.

The small church dedicated to St. Gregory Nazianzen, where the Mass takes place for the Parliament’s staff, is the oldest element of the old convent.

The church dates from the ninth century, but its foundation dates back perhaps to the previous century, when some nuns fled from Constantinople with the relics of St. Gregory Nazianzen.

The church was rebuilt in the 11th century, the period of dating of the frescoes partially visible in the apse (Jesus Christ between St. Gregorio and another saint, believed to be St. Quirino) and shown on the right wall (showing the Redeemer and other figures), while the fresco on the left wall (depicting the Virgin Mary with the Child and the saints) dates from the end of the 13th century. The tower of the church bell was built in the 12th century.

In 1505 the relics of St. Gregory Nazianzen were found in the church; the relics were moved to St. Peter’s Basilica at the time of Pope Gregory XIII (1580).

After the acquisition of the palace by the Chamber of Deputies in the last century and the conclusion of its restoration, in 1987, the new altar of the church was consecrated, for which an ancient Roman sarcophagus was used.

The historic nature of the chapel added to the prayerful atmosphere for the politicians.

Binetti said the Mass is so important to keep the proper perspective in political life: “Praying together [helps us] face the common parliamentary work, avoiding ideological contrasts that have little to do with the common good that every politician should put in first place, with a genuine and concrete spirit of service.”