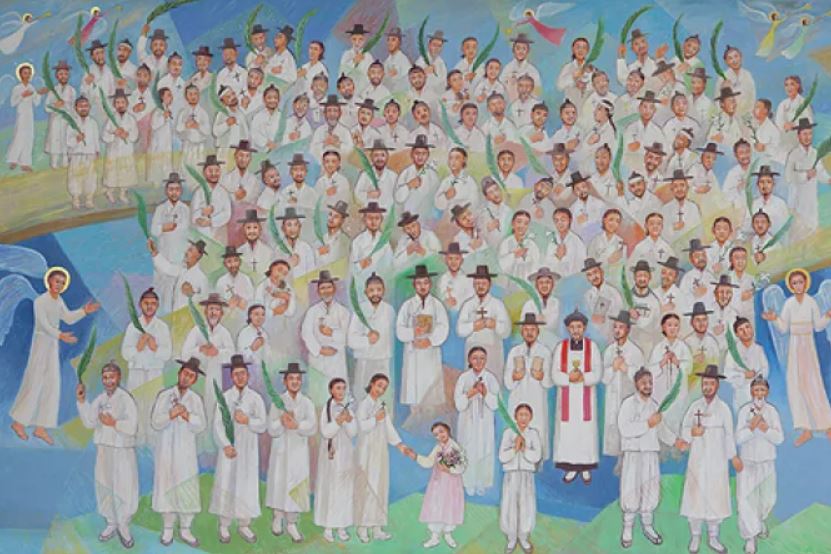 The relics of three of Korea’s oldest Catholic martyrs have been identified with DNA testing, the Diocese of Jeonju announced on Wednesday.

The relics of Blessed Paul Yun Ji-chung and two of his martyr companions were confirmed by the Catholic Church after a months-long investigation that involved historical research and DNA analysis.

The martyrs — identified as Paul Yun Ji-chung, James Kwon Sang-yeon, and Francis Yun Ji-heon — were among the first of thousands of Catholics to be tortured and executed under the 500-year rule of the Choson dynasty.

Their remains were discovered outside of Jeonju in South Korea during renovations of a historic Catholic site in Wanju county, according to a letter from Bishop John Kim Son-tae of Jeonju.

“This discovery is truly a remarkable and monumental event. This is because our church, which has grown on the basis of the blood of the martyrs, has finally found the remains of those who occupy the first place in our history of martyrdom,” the bishop said.

Blesseds Paul Yun Ji-chung and James Kwon Sang-yeon, both Catholics from a noble background, were beheaded in 1791 for violating Confucian rituals.

Korean Christianity dates back to the 18th century, when Korean scholars heard about the spread of the faith in China. They traveled to China to study Christianity under Catholic missionaries. They returned to their homeland to teach the faith, gaining thousands of converts even in the absence of priests.

Paul Yun Ji-chung (​​윤지충 바오로) was a scholar from a noble family who was baptized in 1787, around the age of 28, after having studied Catholic teaching for three years.

He evangelized and converted many of his family members, including his mother, who asked to have a Catholic funeral, rather than the traditional Confucian ritual, at the time of her death. This angered the royal court, who ordered his arrest along with that of James Kwon Sang-yeon.

James Kwon Sang-yeon (권상연 야고보) was from a renowned scholarly family in Korea. After hearing the Gospel, he abandoned all other studies to focus on Catholic teaching. He became a Catholic around the age of 36.

A quotation attributed to him says: “I would prefer to choose the punishment of death rather than violate the Church’s teaching.”

James Kwon was arrested and interrogated with Paul Yun in 1791. Both refused to renounce their faith or give up the names of other Catholics. They were beheaded on Dec. 8, 1791. Paul Yun was 32 and James Kwon was 40 years old.

“They said that it is a great honor to die for God under the blade of a knife,” the governor wrote in his report to the royal court.

The families received permission from the governor to receive their bodies, and they soaked handkerchiefs in the blood of the martyrs’ wounds. There were healings reported at the time from the sick who touched the handkerchiefs.

Francis Yun Ji-heon (윤지헌 프란치스코) was the younger brother of Paul Yun Ji-chung, who catechized him. After his brother was martyred, Francis Yun was forced to leave his hometown, but continued to transcribe religious books and led many people to discover the Catholic faith.

He was arrested in 1801 at the age of 37 and was subjected to severe torture and interrogation in the Jeonju governor’s office.

“I cannot abandon the Church’s teaching which I have loved so much to the point that it has penetrated deep into my bones and become part of my very body. I have no choice but to say I will die for it 10,000 times … I do not fear the national law because I believe firmly in the doctrine of heaven and hell,” he is recorded as saying.

Francis Yun was martyred in Jeonju by being hacked to pieces on Oct. 24, 1801. His wife and children were exiled.

Bishop Kim said in his announcement that a canonical process examining the evidence had concluded on Aug. 18 with a declaration that the relics of the three blesseds were authentic.

“It is God’s will to allow us to see the remains of the first martyrs so that we can imitate the spirituality of the martyrs. The world we live in right now is falling into darkness. … Our society has long been prioritizing money and health over God and individualism rather than solidarity,” Kim said.

The bishop said that he hoped that reflection on the “spirituality of martyrdom can renew ourselves and our times.”

Catholics in Korea celebrate the witness of their country’s Catholic martyrs throughout September, culminating in the feast of the Korean Martyrs on Sept. 20.

This year the Church is also celebrating the 200th anniversary of the birth of Korea’s first priest, St. Andrew Kim Taegon.

Between 8,000 to 10,000 Korean Christians were killed in the 19th century for refusing to deny Christ.

“The victory of the martyrs, their witness to the power of God’s love, continues to bear fruit today in Korea, in the Church which received growth from their sacrifice,” the pope said.

Two Bold and True Responses to the...