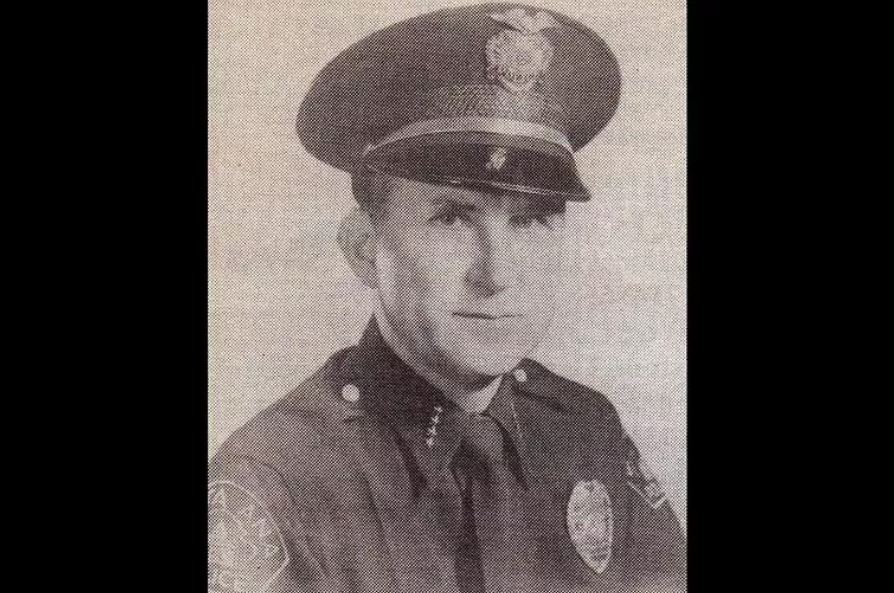 “He had his stand on issues. He wouldn’t budge an inch. He saw his mission on earth.”

Former Santa Ana, California, Police Chief Edward J. Allen, Jr. (1907-90) was a Mafia-busting lawman, the chief who oversaw the Santa Ana Police Department from 1955 until his retirement in 1973, as a poet, and as a devout Catholic whose efforts were praised by such luminaries as Archbishop Fulton Sheen and Attorney General Robert Kennedy.

He was also a dedicated pro-life activist, and in the years after his retirement regularly protested at abortion clinics, even being arrested and imprisoned for criminal trespass. His friend, Norbertine Father Leo Celano, who also had been arrested in similar protests, described the Chief as “a prophet … one who speaks, acts or writes under the extraordinary influence of God in order to make known his divine counsels and will.”

Allen began his career in law enforcement as a patrolman in Erie, Pennsylvania, in 1936. He spent the war years assigned to the FBI office there in Internal Security, and graduated from the FBI National Academy in 1947. Shortly after his return to his post in Pennsylvania, he was recommended by then-FBI Director J. Edgar Hoover to serve as Chief of Police in Youngstown, Ohio, a city where The Untouchables might have thrived had Ed Allen not been on the job.

Allen has been credited with breaking the back of the Mafia in Youngstown where mob influence included numbers games, racketeering and bookmaking. According to a 1968 article in the Youngstown Vindicator, Allen is credited with “challenging Youngstown’s underworld virtually from the moment he pinned on his badge here in 1948.” The story went on to note Allen’s comments on his work, quoting him when he said, “Moral education is needed throughout the nation and in our own police ranks.”

A tough lawman willing to take on the immense menace of the mob, Allen had been remembered by friends as a true innocent, in the best sense of the word — a man who saw good no matter how much evil he encountered on the job.

Married to his childhood sweetheart, the father of two and grandfather of six, Allen was characterized by daughter Mary Beth as a playful man with a childlike joy in life, a sense of humor that included the ability to poke fun at himself and an Irishman possessing the fabled national talent for being able to tell a good tale.

In a letter written after her father’s death, she recalled that the Chief loved to play games. He was a pushover for children and could spend hours with his grandchildren, inviting them on excursions to a local park where he and they delighted in the swings and merry-go-round.

Faith Central to His Life

He is also recalled as a man whose faith was central to his life. Mary Beth described his devotion to St. Francis, the plot of ivy in the garden that was planted in the shape of the cross and his well-worn copy of Lives of the Saints, which he read daily.

A man who could battle the Mafia by day and sing along with a well-loved collection of traditional Irish music in the evenings, Allen was recognized by dignitaries ranging from Robert Kennedy to Archbishop Fulton Sheen, who wrote to him, “God bless you. You are the only Chief of Police in the U.S. who writes poetry.

“I find beautiful symbolism in this. It means that as you have gone about your duties you have had a deep sense of the visible, for this is the condition of being a poet.

“Defense of justice on the outside; love of the poetic on the inside…”

Allen was a prolific poet who could dash off a heartfelt sonnet or a witty verse to honor a friend on any occasion. He was also an author whose book, The Merchants of Menace: the Mafia—A Story of Organized Crime, earned him television coverage and a stint as advisor to Francis Ford Coppola during the filming of The Godfather.

According to fellow pro-life activist Dorothy Allen (no relation), “His spiritual development was over the course of his life. Many people who knew him at the end said he was a living saint.” She also noted, “He had a sense of humor and did much for the poor. He was particularly devoted to the Blind Children’s Center in Santa Ana.”

Recalling the three times Ed Allen was arrested for blocking access to abortion clinics in Operation Rescue-style tactics, pro-life activist Ralph Buglione commented, “He had his stand on issues. He wouldn’t budge an inch. He saw his mission on earth.”

Buglione describes one occasion on which he and Allen were arrested while protesting abortion, saying, “We sat down in the foyer of the clinic, and the manager called the police. Some of the policemen used to work for Ed. He lectured them. He said, ‘When I was a police chief, I used to put these people in jail. As police officers we had an obligation to put these people in jail.’”

Buglione added, “The police tried to coax him out. They didn’t know what to do.”

On that occasion, charges of trespass were dropped, but in 1984, Allen and Buglione were arrested in Cypress during a similar demonstration on behalf of the unborn and served 10 days in the Orange County Jail.

Buglione recounts the experience, saying, “He knew that he was going to be arrested. He never revealed any regrets. He felt this was what he had to do. He was a leader. You can’t help but follow a man like that or you feel like a coward.” Buglione added, “Nobody likes to get arrested. You lose your identity. You’re humiliated.” He recalled, however, “Ed didn’t feel that way or he didn’t show it.”

Both were offered probation if they would agree to cease their protests at abortion facilities, and both refused.

After their time in jail, they were sentenced to perform community service work — which the judge agreed could be spent protesting abortion at a designated distance from clinics!

Father Leo Celano said of him on the occasion of his memorial Mass on Jan. 9, 1990, “Ed was no stranger to the Cross which God fashioned for him. It is not by chance that he entered the hospital for his last agony on Dec. 28, the Feast of the Holy Innocents, those for whom he had so long fought to protect, to defend, to rescue.”

“The love of money is
The Root of All Evil”*
From which the Abortionists stem!
All-RED-Handed-Killers
Spilling Innocents’ blood
As did Herod in Bethlehem!

Our man-dated court
Lets killers abort,
But not the ONE Judge Supreme!
Through Whom True Justice doth Beam!
Where Innocents’ lives are not sold
For Judas—like silver—or gold!

(“All-RED” is a reference to Southern California abortion clinic owner Edward Allred, at whose clinic Chief Allen was frequently a protestor.)