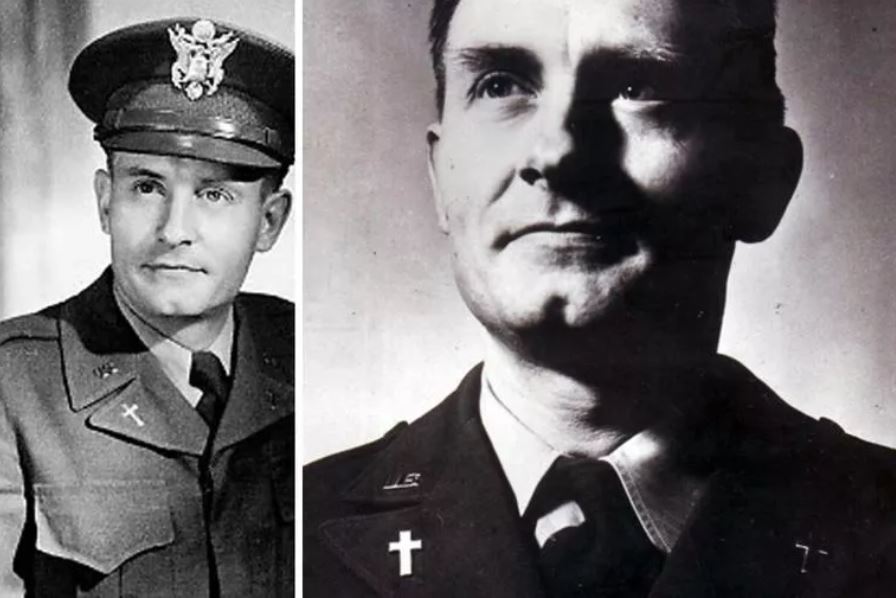 The remains of the Servant of God military chaplain were identified in Hawaii earlier this month. In his home diocese of Wichita and across the country, the discovery is celebrated.

“Hey guys, don’t worry about me. I’m going where I always wanted to go, and when I get there, I’ll say a prayer for all of you.”

Those were the last words of U.S. Army chaplain Father Emil Kapaun to his friends in Pyoktong Prison Camp 5.

Father Kapaun, weakened from pneumonia and harsh conditions, was being dragged by his Korean captors from the mud hut where he and hundreds of other prisoners of war were held, to a building the Korean soldiers called the “hospital.” His fellow POWs, seeing how few of the hospital’s patients returned alive, had dubbed the medical facility the “death camp” and tried desperately to prevent the Korean soldiers from taking him there. The soldiers prevailed, however, and Father Kapaun was dragged away for the last time.

Just two weeks later — on May 23, 1951 — the chaplain who had prayed with and for so many captive American soldiers would himself be dead.

Earlier this month, the U.S. military announced that Father Kapaun’s remains had finally been positively identified. For years, it had been assumed that the priest was buried alongside hundreds of other prisoners of war in a mass grave in the National Cemetery of the Pacific in Honolulu, Hawaii. However, the U.S. military has continued its efforts to identify fallen soldiers and return their remains to their families. This year a forensic team from the U.S. Defense POW/MIA Accounting Agency (DPAA), relying on the modern science of DNA matching, dental records and witness testimony about the location of his burial, was able to confirm that Father Kapaun’s remains had been located.

Contrary to earlier reports, Father Kapaun was not entombed in a mass grave, where recovery would have been nearly impossible. Rather, he was buried behind a hut in a North Korean town. After the Korean War ended, Father Kapaun was among more than 4,000 prisoners whose remains were exchanged as part of the 1953 Korean Armistice Agreement. His body was reinterred in Hawaii; and when the grave was opened in February 2021, his remains were found to be more than 95% intact.

In Father Kapaun’s home diocese of Wichita, Father John Hotze serves as episcopal delegate for the cause of beatification and canonization. Father Hotze told the Register that the positio, the 1,066 pages of documentation attesting to the priest’s holiness, had been submitted to the Vatican in 2015. A date had been scheduled for a meeting with the Vatican’s Congregation for the Causes of Saints, and Father Hotze expected that Father Kapaun would have been named “Venerable” at that time. However, the congregation’s meeting was postponed when everything closed down in Rome due to the pandemic.

The Wichita Diocese, Father Hotze explained, had believed along with others that Father Kapaun had been buried in one of the mass graves along the Yalu River, which forms the border between North Korea and China. But the remains that had been labeled with his name proved to be the remains of a soldier only 18 or 20 years old; so they knew that it couldn’t be the 35-year-old Father Kapaun. Recently, the fellow POW who had buried Father Kapaun in North Korea came forward and told investigators where he had been entombed: He hadn’t been buried in a mass grave like the others; he had been interred in the Korean town, behind one of the huts in a kind of lean-to.

“His remains are still in Hawaii,” Father Hotze reported, “and from there, they’ll be sent to Arlington. His remains will be secured there in Arlington until the family is able to determine where they would like him to be interred. They [the Kapaun family] knew before that this could possibly be happening; and they have inferred that the diocese will weigh heavily in their decision regarding a final resting place. The first consideration is that it should be somewhere that is safe, and then that it will be a place where people can pray. We would prefer that it be someplace that could be public yet secure.”

Scott Carter, coordinator of the Father Kapaun Guild for the Diocese of Wichita, always knew that there was a possibility that Father Kapaun’s remains would be recovered. “It’s such a big deal to have the physical remains,” he told the Register, “but you never know if it’s going to happen for sure. We knew they were working on the remains, but we never expected to hear such good news!”

Carter said of the saintly priest whose memory he preserves through the guild, “Father Kapaun lived his life trying to be a beacon of hope and to build up the men in the camp. He would remind us that our ultimate goal is heaven — and we need to take care of one another and make sure that we’re getting there!”

Archbishop Timothy Broglio for the Military Services USA, expressed his gratitude to the U.S. military for their assistance in resolving this case:

“It was a great joy to learn that the remains of the Servant of God, Father Emil Kapaun, have been identified. I am deeply grateful to the Armed Services and all of those who have been engaged in this painstaking effort. I rejoice with the relatives of the Servant of God and with the Diocese of Wichita from whose presbyterate Father Kapaun answered the call within a call to the military chaplaincy.”

Father Kapaun’s dedicated service and his bravery as chaplain in the Korean War have been an inspiration in his home diocese of Wichita and beyond since the 1950s. In 1993, he gained international acclaim when Pope John Paul II declared him a “Servant of God,” the first step on the path toward sainthood. Twenty years later, in 2013, Father Kapaun was posthumously awarded the Medal of Honor by President Barack Obama for his heroic actions in Korea. In presenting the Medal to Father Kapaun’s nephew Ray Kapaun, President Obama said,

“This is an amazing story. Father Kapaun has been called a shepherd in combat boots. His fellow soldiers, who felt his grace and his mercy, called him a saint, a blessing from God. Today, we bestow another title on him: recipient of our nation’s highest military decoration. I know one of Father Kapaun’s comrades spoke for a lot of folks here when he said, ‘It’s about time.’”

Ray Kapaun, the priest’s nephew, has represented the Kapaun family in conversations with the military and with the Diocese of Wichita. Ray talked with the Register about his uncle’s gentle disposition, about the eventual burial site here in the mainland U.S., and about the prospect of sainthood for his uncle.

“He was one of those people,” Ray explained, “… who would not want the attention he’s receiving. He would give the shirt off his back to someone in need, but he didn’t want to have any notoriety brought to him. He would think that this [the attention given to his remains and to his possible beatification and canonization] is crazy. He would say, ‘I was just doing my job!”

Ray Kapaun’s middle name is “Emil,” after his beloved uncle; and it was Ray who accepted the Medal of Honor when it was presented. Two years ago, Ray drove to Father Kapaun’s hometown parish, St. John Nepomucene in Pilsen, Kansas, to entrust the medal to their care. Ray believed that it should be there, at the parish where Father Kapaun had grown up, and where he served as administrator before responding to the call to become a military chaplain.

About the eventual return of Father Kapaun’s remains to the U.S. mainland, Ray said, “We have been talking with the diocese, and we are still in the process of working through all the details. With COVID and other issues, it will more than likely be the end of summer or early fall before we bring Father’s remains home.”

And where will Father Kapaun be laid to rest, once his remains are returned? Ray Kapaun was still discussing the burial location, although he suggested that they may choose temporary interment; should Father Kapaun be declared a saint in the future, things would change: “Right now, there is discussion of building a museum and a shrine in his hometown, the small Czech farming community of Pilsen, Kansas.”

Father Kapaun’s holy witness continues to inspire, according to his nephew:

“My uncle led by example; he didn’t tell people what to do: He showed them.”