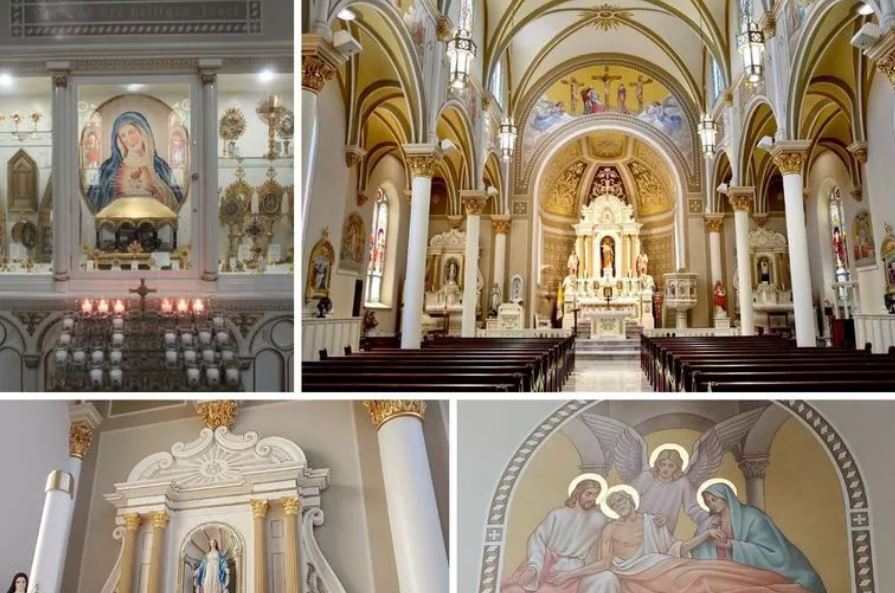 Visit the parish in Westphalia, Missouri.

Since 1848, St. Joseph Catholic Church has been the treasure of Catholics in Westphalia, Missouri, a town that lies between St. Louis, 120 miles to the east, and Kansas City, 170 miles to the west. Early-19th-century immigrants who arrived in the Show Me State from their native western Germany dedicated their church to the Husband of Mary and Foster Father of Jesus.

Recent restorations and judicious renovations to this edifice were completed a year ago. Once again, the saintly depictions in the exquisite windows — more than 20 lining the nave and clerestory — appear as when they first graced these panes, thanks to their renewal. Because of the protective layers added over years to “shelter” them, they were prevented from being seen in their full hues. The work of Emil Frei, these windows graced the church around the turn of the century, when Frei, a Bavarian native, emigrated and eventually arrived in St. Louis to continue making these pictorial windows of saints and biblical scenes in the Munich style that he mastered. (Frei glassworks is still active in St. Louis.) With their names displayed in German, among those saints’ images are familiar and unfamiliar holy lives, such as George of Cappadocia (one of the 14 Holy Helpers), Clare, Martin of Tours, Herman Joseph, Conrad of Constance, Ludger, Boniface, Charles Borromeo, Theodore of Heraclea, Gerhard, Catherine of Alexandria, Hubert, Helena, Margaret of Antioch, and Cecilia.

The sanctuary walls and dome, the capitols on the Corinthian columns, and framing around the Stations of the Cross are gilded in 23-karat gold leaf. Even the extensive stenciling patterns along the apse walls reflect this golden hue.

At the very top of the sanctuary’s golden dome with its intricate vine-decorated panels, the Holy Spirit as a dove is depicted surrounded by radiant rays. The ornate designs of the sanctuary’s golden walls are a beautiful background for the tall, white reredos, with its delicate swirling lines and its altar with a tabernacle. This original reredos has a high, central shrine above the tabernacle to house a wood-carved statue honoring the church’s patron, who holds the Child Jesus and a lily, which symbolizes his purity.

Flanking the image of St. Joseph are Corinthian columns, which echo those along the nave. Statues of Sts. Peter and Paul stand to the sides of the reredos, and below them angels are shown kneeling in adoration toward the tabernacle.

The altar and ornate ambo continue the connection to the church’s history. Father Anthony Viviano, the pastor, pointed out how a parishioner who is a carpenter made them from the church’s old Communion rail. A woodworking company fashioned the new Communion rail that now graces the front of the sanctuary.

The murals above the sanctuary and all of the arches lining the nave reflect the church’s heritage. As the pastor told the Register, “This church is generational.” He said the parishioners take great pride in and care of this church. “It speaks to me of the real commitment they have — their hearts and souls are in the church and their spiritual life.”

The great double arch over the sanctuary that had displayed a scene of Jesus with the children now frames the new scene of the Crucifixion. “The idea was to have a powerful Crucifixion scene and the altar of sacrifice beneath it and in line with the tabernacle,” Father Viviano explained. At the same time, the mural showing Jesus with the children remains replicated in a scaled-down version over one of the entrance doors. One other mural redone and moved is the Death of St. Joseph. It appears between the stained-glass saints and above the church’s new reliquary case.

The murals over all the arches capture major scenes from the life of the Holy Family. The faithful can contemplate the Marriage of Joseph and Mary, the Annunciation, the Adoration of the Magi, the Finding of Jesus in the Temple, the Descent of the Holy Spirit on the apostles and Mary, and more. These newly painted murals closely reproduce the originals.

Kevin Grabowski of Conrad Schmitt Studios, who was in charge of the entire restoration, described how these paintings include remnants of the originals that had been salvaged, adding that the Westphalia Historical Society was able to help with much-needed historical material so that these new murals reflect the originals. Grabowski said the goal was “to refresh and not give up the elegance,” adding, “The colors, the pieces are still in the same spot, just better.”

Shrines are located to either side of the sanctuary. To the traditional left side is the shrine dedicated to the Blessed Mother. The beautifully carved reredos, with its delicate swirls, surrounds the image of Our Lady of Grace. Small angel statues are below, shown to “attend” her, while an image of St. Thérèse, the Little Flower, stands to the Queen’s side, depicted as her lady in waiting.

The matching shrine altar on the right honors St. Aloysius Gonzaga, recalling the time long ago when the Jesuits were the pioneering priests administering the parish. New lighting accents these refurbished shrines.

In their own way, the original Stations of the Cross have also taken on new life. They were restored with a full color palette. Father Viviano pointed out that the bas relief figures are actually metal. The rest is wood. A local professional artist donated her time and talent to bring these Stations of the Cross back to life.

The heavenly court of saints is well represented also in the statuary, from depictions of the Four Evangelists around the pulpit to those including St. Anne and St. Anthony. Beautiful images of the Sacred Heart and Immaculate Heart stand to either side of the sanctuary near the side altars, while an ornate Infant of Prague image appears in one side shrine.

Relics of saints abound in St. Joseph’s new reliquary case, beautifully crafted by the same carpenter who made the altar.

Father Viviano wanted to make the case a “prominent piece” to contain and display the relics of more than 260 saints.

Contained therein is a heavenly who’s who.

All the relics were obtained directly from Rome by a former pastor many years ago. Among other relics for veneration are a fragment of the True Cross, a fragment of the veil of the Virgin Mary, a fragment from the Holy Sepulcher of the Lord Jesus, and a fragment of St. Joseph’s clothing. The parish also has a set of Pope Leo XIII’s vestments — chasuble, stole and maniple — and chalice veil procured by the same pastor.

St. Joseph’s namesake parish honors his foster son Jesus with 24-hour adoration on First Fridays and holds First Saturday devotions and regular times to pray the Rosary and enrollment in the scapular.

Lifelong parishioner and octogenarian Mary Ann Klebba, who was baptized here, has seen other renovations over the years, both before and since St. Joseph Church was put on the National Register of Historic Places in 1972.

“This is one of the most thorough ones,” she said of the renovation. “To me, it means a lot. It’s like all churches should be.” 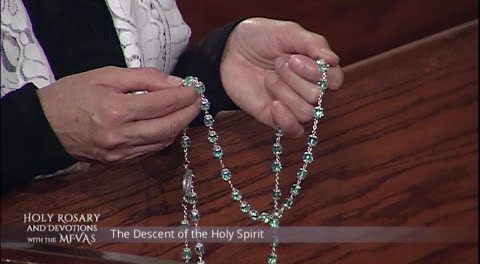 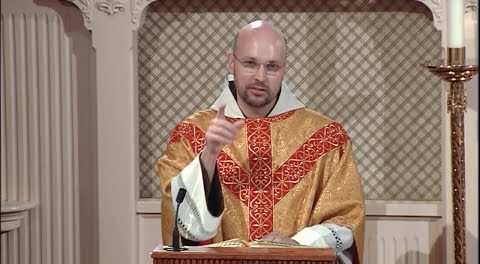 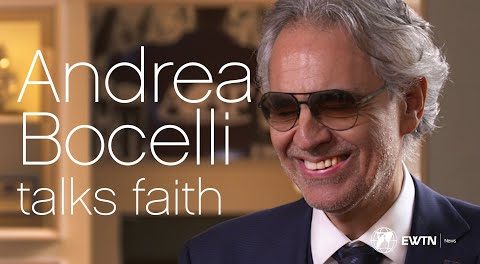 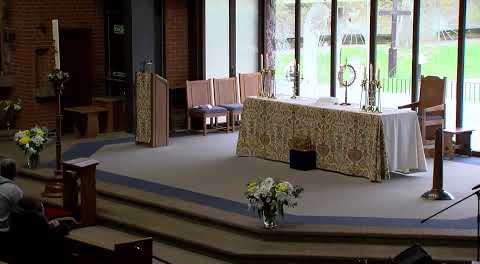