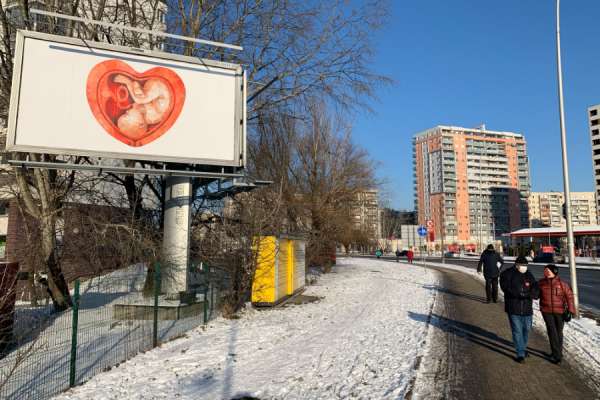 More than 1,000 posters depicting an unborn child inside a heart-shaped womb have gone on display in cities across the country.

Poland’s Constitutional Tribunal declared on Oct. 22 that a law permitting abortion for fetal abnormalities was unconstitutional. The ruling came into force when it was published in the country’s Journal of Laws on Jan. 27.

The court’s verdict prompted a wave of demonstrations across Poland last fall. Protesters directed their anger at the ruling Law and Justice party (PiS), but also at the Catholic Church, which welcomed the decision.

The publication of the ruling in January sparked a new series of protests.

The ruling, which cannot be appealed, could lead to a significant reduction in the number of abortions in the country. Until now, Polish law permitted abortion only in cases of rape or incest, a risk to the mother’s life, or fetal abnormality.

Approximately 1,000 legal abortions take place in Poland each year. The majority are carried out in cases where the unborn child has a severe and irreversible disability or a life-threatening incurable disease.

Polish pro-life campaigners described this legal provision as “eugenic.” Data from the Ministry of Health showed that in 2019, the likelihood of Down syndrome accounted for 40% of abortions.

The tribunal said in its verdict that the burden of raising a severely and irreversibly handicapped or terminally ill child should not fall only on the child’s family, but be shared by society as a whole.

In the wake of the ruling, Catholic leaders have said that the Church, society, and state need to increase support for families.

The pro-life poster campaign is organized by the Our Children Foundation – Education, Health, Faith. The image, which is often depicted without any words, has appeared both on billboards and in advertising displays at bus stops.

In December, the group sponsored large-format posters with slogans such as “I think, feel, I don’t kill,” “I give life, I care,” “Choose life,” and “Every life is a gift.”

Pope Francis sent a message of encouragement to Poland’s pro-lifers after the Constitutional Tribunal ruling.

“Through the intercession of Mary Most Holy and the holy Polish pontiff [St. John Paul II], I ask God to inspire in the hearts of all respect for the life of our brothers, especially of the most fragile and defenseless, and to give strength to those who welcome it and take care of it, even when it requires heroic love,” the pope said at his general audience on Oct. 28.

The Polish Pro-Life Association will hold a week of prayer in defense of life beginning on March 19, the liturgical memorial of St. Joseph, and ending on March 25, the Feast of the Annunciation, marked as Sanctity of Life Day by the Catholic Church in Poland.