Rosary of Mary Queen of Scots Taken in Castle Theft 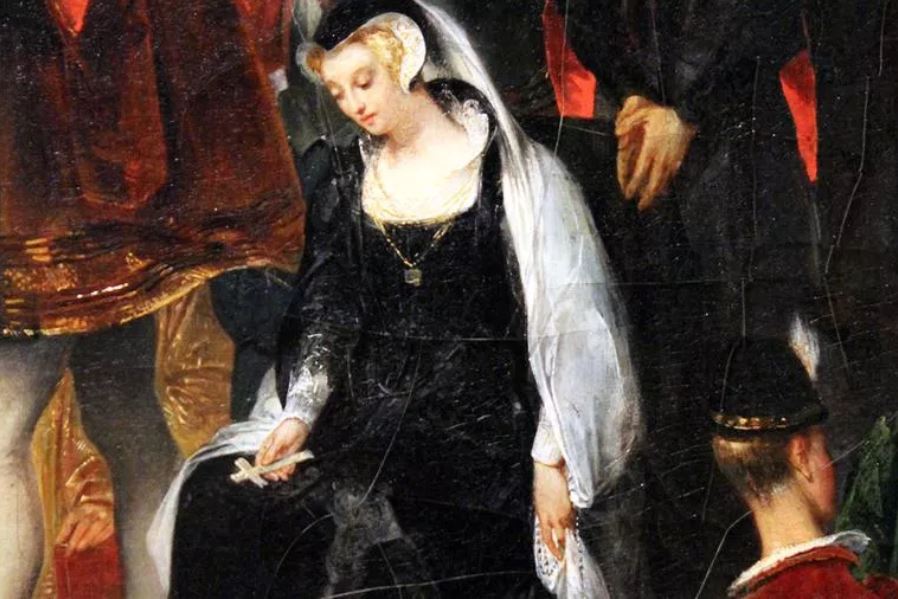 Rosary of Mary Queen of Scots Taken in Castle Theft

Mary Queen of Scots holds her rosary in a detail from “The Reading of Mary Stuart’s Death Sentence,” painted in 1826 by Eugène Devéria. (photo: Public Domain)

Recent headlines about the theft, castle and rosary are an uncannily accurate summation of the Scottish monarch’s life and death.

In the dead of night on Feb. 8, 1587, Mary Queen of Scots wrote to France’s King Henri III, brother of her first husband:

“Tonight, after dinner, I have been advised of my sentence: I am to be executed like a criminal at eight in the morning. …

“The Catholic faith and the assertion of my God-given right to the English crown are the two issues on which I am condemned, and yet I am not allowed to say that it is for the Catholic religion that I die, but for fear of interference with theirs. The proof of this is that they have taken away my chaplain, and although he is in the building, I have not been able to get permission for him to come and hear my confession and give me the Last Sacrament, while they have been most insistent that I receive the consolation and instruction of their minister, brought here for that purpose. …

“It remains for me to beg Your Most Christian Majesty … [for] prayers offered to God for a queen who has borne the title Most Christian, and who dies a Catholic, stripped of all her possessions.”

And with that she lay down her pen and awaited the coming of dawn.

It is not often a theft of rosary beads makes international news headlines.

Yet that is what happened when, on May 21, 2021, thieves broke into Arundel Castle, Sussex, and stole items valued in excess of one million pounds. More concerning than their monetary value, was the fact that these items were described as “irreplaceable.”

Arundel Castle is home to the Dukes of Norfolk — a family that, for the most part, has remained Catholic since the time of Henry VIII. Perhaps not surprisingly, many of the items stolen had links to the family’s faith. The most noteworthy of these are the gold rosary beads carried by Mary Queen of Scots to her execution in 1587.

Mary Queen of Scots — or, more properly, Mary I of Scotland — was Scottish queen from Dec. 14, 1542, until her forced abdication on July 24, 1567. She belonged to the Scottish Royal House of Stuart. She was also Catholic. Barely six days old when she ascended the throne, her childhood was spent in her mother’s homeland, France. There, aged 15 years old, she married the Dauphin, Francis. His accession to the throne a year later in1559 made Mary queen consort of France.

This was to be the first of Mary’s three marriages, all of which, to some extent, were formed for dynastic reasons. All were to prove as unsatisfactory politically as they were personally unhappy for the Scottish queen.

Less than two years married, in 1560 Francis died. Heartbroken, Mary returned to Scotland. Her kingdom was, like so much of northern Europe, a country in transition from the old faith to the new Protestantism. As it transpired, a Catholic queen was to be tolerated — for a while.

Five years after returning to Scotland she married her half-cousin, Lord Darnley. The couple had a son, James, born a year later. Eight months after the birth, Darnley was murdered. In May 1567, Mary married again. However, by 1568 her new husband Earl of Bothwell was exiled and Mary forced to flee south to England. In the process, she was also compelled to abdicate the Scottish throne in favor of her son, James.

The Scottish queen’s last night in her kingdom was spent at Dundrennan Abbey, a Cistercian monastery; thereafter she crossed by boat to England where she sought refuge with her cousin, Elizabeth I. Instead of care and protection, however, Mary found herself imprisoned by the English queen for the next 19 years.

The now Protestant Elizabeth Tudor feared that English Catholics would consider Mary the rightful queen of England — as, indeed, many claimed during the 1569 rebellion known as the Rising of the North. Mary’s claim to the English throne was through her ancestor Henry VII, but unlike Elizabeth, the daughter of Henry VIII and Anne Boleyn, Mary could demonstrate legitimacy. In her mind, it was clear she had the superior claim to the English throne.

It was to make little difference. After enduring many years as Elizabeth’s prisoner, in 1587, Mary was found guilty of plotting to assassinate her cousin and as a consequence sentenced to death.

Having spent her last hours in prayer, as dawn broke on that February morn Mary Queen of Scots proceeded to the Great Hall of Fotheringhay Castle were she was to be executed.

As was customary, the executioner knelt and begged forgiveness of the condemned prisoner. Mary replied, “I forgive you with all my heart, for now, I hope, you shall make an end of all my troubles.” Blindfolded, the prisoner knelt before the block. Her last words were, In manus tuas, Domine, commendo spiritum meum (“Into thy hands, O Lord, I commend my spirit”).

Elizabeth refused Mary’s request to be buried in France. Instead, she had her interred at Peterborough Cathedral according to the rites of the new Protestant religion.

It is fitting that, in the news headlines once more, the name of Mary Queen of Scots should be accompanied by the words theft, castle and rosary.

For Mary Stuart had been robbed of her rightful claim to the English throne — a theft that ended in a castle where she was tried, found guilty and days later executed. No doubt, it was in those last earthly hours spent in the chapel of Fotheringhay Castle — “stripped of all possessions” — that, as befits one born on the feast of the Immaculate Conception, she prayed the golden beads of her rosary, both for strength and for those who had betrayed her.

Secrets of the Pope’s Security For...