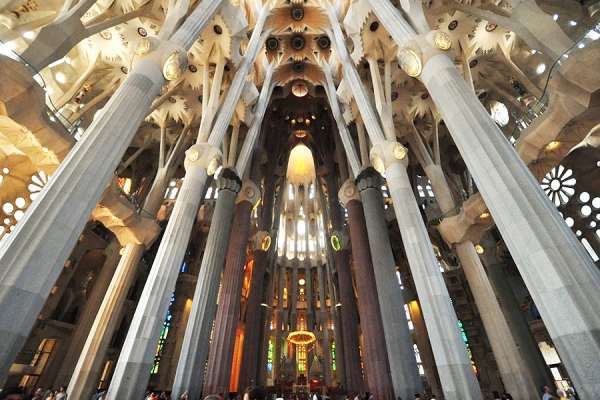 Workers will seek to complete the Tower of the Virgin Mary with the placement of a 12-pointed star before the end of the year, reported ACI Prensa, CNA’s Spanish-language news partner.

Once finished, the tower is destined to become the second tallest at the basilica designed by the visionary architect Antoni Gaudí, standing around 450 feet tall.

Work on the tower is well advanced, but completing the final part of the structure is a delicate task.

A video produced by the basilica shows that the Tower of the Virgin Mary stands next to the central Tower of Jesus of Christ, which is surrounded by four smaller Towers of the Evangelists.

According to the website of Barcelona archdiocese, the final part of the tower will consist of three elements.

It said: “First, and in ascending order, is the corona [crown]. It is an element made of stone and six meters high [around 20 feet] and ending with 12 wrought-iron stars. The stars surround the lower part of the terminal in an ascending way.”

Next, “the shaft or lantern, which corresponds to the middle part of the terminal, is 18 meters high [around 60 feet]. Defined by the geometry of a hyperboloid, it ends in three arms that support the star. Its entire exterior surface is made of trencadís (mosaic) of white and blue tones.”

Finally, “the star is the last element of the tower. Regarding its dimensions, it has a diameter of 7.5 meters [about 25 feet] and a total of 12 points. All the faces are made of textured glass and it is lit from within.”

Whether the tower (pictured above with the pointed star in an artist’s impression) will be completed this year will depend on the coronavirus pandemic. If the virus increases in the city, works would have to be paused again, as they were last year.

According to the basilica’s website, if health measures allow, the stone panels of the corona will be put in place in the first quarter of 2021. In the third quarter, the two large pieces of the lantern will be installed. In December, the star will be added.

The basilica reopened on July 4, 2020, following a more than 100-day closure due to the coronavirus crisis.

The unfinished church, which was forced to close to tourists from March 13, 2020, offered free entry to medical workers and their families in the first phase of its reopening.

The basilica is expected to be completed in 2026, the centenary of Gaudí’s death.

Gaudí, a devout and ascetic figure, began working on the project in 1883. In 1914, he stopped all other works to focus exclusively on the basilica, to which he dedicated himself until his unexpected death.

He was struck by a tram in 1926, at the age of 73, while walking to Barcelona’s St. Philip Neri church for confession. Passers-by did not recognize the famed architect because of his worn-out clothes and lack of identity papers.

He died three days after the accident and was buried in the crypt of his unfinished basilica. His cause for canonization was opened in Rome in 2003.

In June 2019, the basilica finally received an official building permit, 137 years after its construction began.

Progress on the construction was initially slow as the works depended on private donations. Building work was interrupted by the Spanish Civil War, during which combatants set fire to the crypt and destroyed some of the architect’s designs and plaster models.

Gaudí created numerous celebrated works in Barcelona using his distinctive style inspired by natural forms and eschewing the sharp angles associated with modernist architecture. He summed up his approach by saying, “The straight line belongs to men, the curved one to God.”

When questioned about how long it would take to build the basilica, he reputedly said, “My client is not in a hurry” — referring to God.