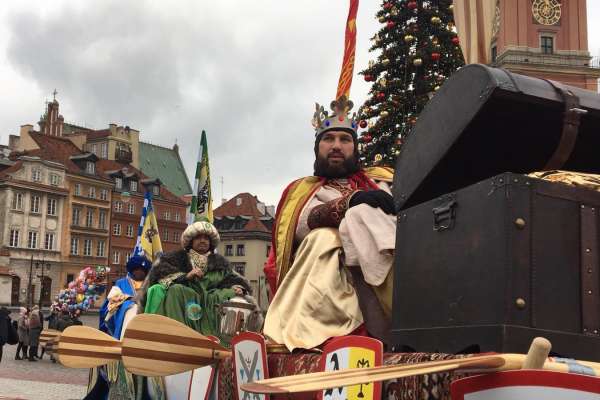 The processions were significantly scaled back from last year, when 1.3 million people took part in the event, which commemorates the visit of the Magi, or wise men from the East, to the newborn Jesus in Bethlehem.

Organizers believe that the annual parade, known in Polish as Orszak Trzech Króli, is typically the largest street nativity play in the world.

In some places, the Three Kings traveled on horseback from parish to parish. In others, car parades were organized. In the capital, Warsaw, the procession attracted 90,000 people last year. This year only five people took part, in compliance with coronavirus restrictions.

Fr. Paweł Rytel-Andrianik, director of the Office for Foreign Communication of the Polish Bishops’ Conference, said: “Most of the mini-processions were organized after the Holy Masses, in the form of caroling and a march in groups of five people, in accordance with the sanitary requirements.”

More than 1.3 million people in Poland have tested positive for COVID-19 and 30,055 have died as of Jan. 6, according to the Johns Hopkins Coronavirus Resource Center.

The motto of this year’s parades was “Let Us Give Thanks to the Lord,” the title of “Song XIII” by Polish Renaissance poet Jan Kochanowski.

Piotr Giertych, chairman of the board of the Three Kings Parade Foundation, which oversees the event, said that the motto expressed gratitude that Jan. 6 once again became a national holiday in Poland 10 years ago.

“We also have something to give thanks for after this difficult year. 2020 was a difficult year for all of us, but also it was also full of ideas, full of hope, and we precisely hope that the procession of the Three Kings is like a star shining in the dark, like the birth of Christ,” he said.

The first Three Kings street parade was held in Poland in 2009. It was created as a continuation of the nativity play in one of Warsaw’s schools. The ceremonial procession derives from the native tradition of nativity plays and caroling, but it is also modeled on the parades organized in Spain and Mexico.

Thanks to the feast of the Epiphany becoming a public holiday in 2011, the number of parades has grown steadily. Since 2012, the president of Poland has supported the events, beginning with Bronisław Komorowski and continuing with the country’s present head of state Andrzej Duda.

According to the website of the Three Kings Parades Foundation, parades took place at 22 locations outside Poland in 2019. Parade organizers hope that the phenomenon will continue to spread worldwide.

As in previous years, Pope Francis greeted participants in the processions in Poland this year.

In his Angelus address on Jan. 6, he said: “A special greeting goes to the Three Kings Parades Foundation that organizes events of evangelization and solidarity in numerous cities and villages in Poland and in other nations.”

How 1 Welsh Priest Brought Our Lor...