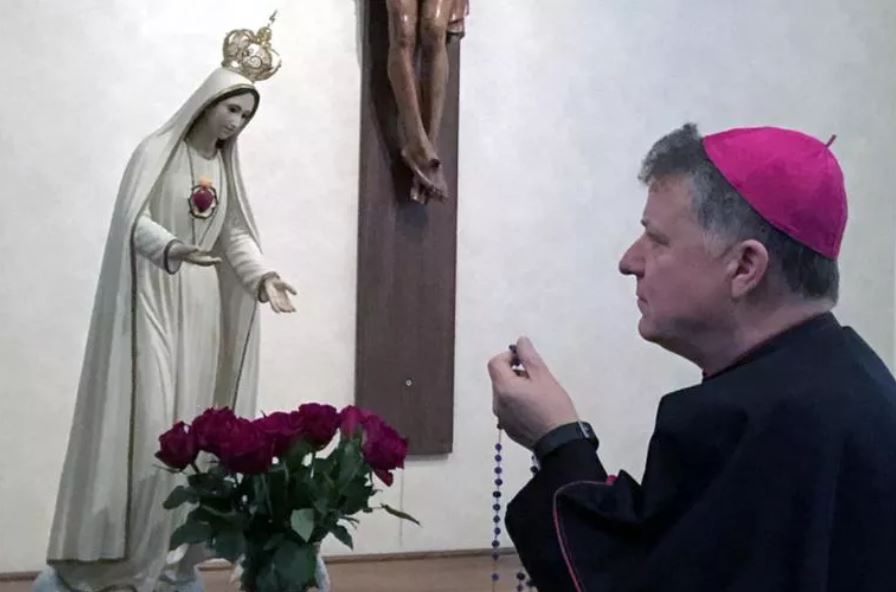 Bishop John Keenan will lead a first-of-its-kind Marian consecration in his Diocese of Paisley, Scotland, and invites those across the Atlantic to join him via social media.

Bishop John Keenan sent out a marvelous Marian invitation, first to the children in the 35 elementary schools in the Diocese of Paisley, Scotland. With their enthusiastic response, he then invited the priests and laity to also join in this “first-time” ever, anywhere, diocesan consecration led by a bishop, starting on Saturday, Jan. 9.

What makes it a first-ever event is that Bishop Keenan will be using the new book Child Consecration: To Jesus Through Mary — Following in the Spirit of St. Thérèse, the Little Flower, by Blythe Kaufman, founder of the worldwide The Children’s Rosary.

Don’t let the title distract you into thinking it works with one age group only. As Bishop Keenan said, “I thought if I had one book I could recommend to families, this would be it.”

He finds it a book that works just as much for adults and priests as it does for children as young as 4 or 5. Hence the invitation for the consecration expanded to all.

Kaufman sent him the manuscript after she was inspired to write this 2020 book. He had met her at the 2018 World Meeting of Families in Dublin where he was with a delegation representing the Scottish bishops. She was talking about promoting the Children’s Rosary in dioceses.

In the book, Bishop Keenan immediately liked the way each of the simple chapters picks up one of the ideas of the story and relates to our devotion to Jesus through Mary. There are “lovely childlike representations” in the art, such as the fruits and vegetables in the garden as a girl named Daisy follows her mother who “is Our Blessed Mother asking her to prepare the garden and guiding her to do so.”

At the same time, it is an appealing way of consecration to Jesus through Mary. Bishop Keenan said, “It is a lovely story in its own right.” He wrote to Kaufman “telling her so.”

In fact, she asked him to write the Foreword, which is a brilliant explanation of the simplicity and depth of this consecration.

Conversing about his diocesan-wide consecration, Bishop Keenan said he himself has done “St. Louis de Montfort’s Totus Tuus consecration in the past and led others to so do. For me, this child consecration is an authentic example of St. Louis’s consecration.”

At the same time, he noted that Kaufman “uses the spirituality of St. Thérèse, the Little Flower, and that simplicity, trust, and childlike confidence runs all the way through.”

Bishop Keenan has been a strong champion of Marian consecration. He described how “within a week of birth my mother had consecrated me to Our Blessed Mother.” He las felt for a long timethat this early entrustment shaped his priestly vocation and now his role as a bishop.

After the foreword, he was asked what he thought about making this consecration himself and asking his diocese to join him. The answer didn’t take long to shape up.

“I’m looking forward to this myself, to reconsecrating myself to Jesus through our Blessed Mother,” Bishop Keenan said quite happily. “Every day I’m working and laboring with Jesus and feel like one of the disciples walking with Jesus every day. I feel I do that through our Blessed Mother is very special. All of my life I’ve been convinced the simplest easiest and best way to Jesus is through Our Lady.”

Naturally, he was more than happy to invite his diocese to make the consecration, beginning with the school children.

Although with short notice the request went out on the Solemnity of the Immaculate Conception on Dec. 8, very many of the head teachers “were very happy about it and looking forward in leading their schools in the consecration,” Bishop Keenan said. “Then I thought, why not ask the diocesan priests to join us” because they’re shepherds with Christin this diocesan mission. “I wrote all my priests and invited them to join along with me in this consecration, to reconsecrate themselves and reconsecrate ourselves to Jesus though our Blessed Mother. “Would you like to join me in consecrating yourselves, especially in these times?” he asked. In answer, “many of them are looking forward and joining us in the consecration.”

Why the Particular Dates

The 33-day consecration begins Jan. 9 and ends Feb. 11, the Memorial of Our Lady of Lourdes.

“Our Lady of Lourdes is special in our diocese,” Bishop Keenan explained. “Every year we make an annual diocesan pilgrimage to Lourdes to consecrate the diocesan work to Our Lady there. Because of the pandemic we can’t do it this year.”

“I see this as going to Lourdes as we would do each year and consecrating our work for Jesus through her.” There is need for a lot of physical healing, “and to pray for our deliverance from this pandemic. And also spiritual healing for the world feels anxious.”

Earlier, he had said on a video, “How much this year of pandemic has shown that our poor world needs so much healing not just from the virus, of course, but also from a sort of spiritual sickness that’s gradually taken hold of our world over the past decades or so.”

While the children will be able to do the consecration daily in the schools, parents, laity and priests can join Bishop Keenan nightly at 9 p.m. as he does the day’s short reading and prayer livestream on his Facebook page.

“I will read the chapter and the prayers. It takes 15 minute — no more than that,” he said.

His hope is that people beyond the perimeter of his diocese, which is near Glasgow, will also join in this consecration. That means not only people in Scotland, England and Ireland, but even in the United States.

Since Scotland is 5 to 7 hours ahead of the United States, depending on the time zone, people in the U.S. can join in via Facebook between the hours of 2-4 o’clock in the afternoon. He said if people can’t join at that time, they can still join the consecration anytime in the evening because the day’s reading and prayer will be there.

“It’s lovely to think that across the Atlantic we’re joining together and making this consecration,” the bishop said.

Bishop Keenan is looking forward to a big response. “The providential thing” is that despite the pandemic this pastoral ministry is online. It’s “almost a silver lining as the pandemic renews the domestic church and family prayer… They’re looking forward to gathering together at the end of the day in the sitting room as a family and making this consecration together.”

With the diocesan wide consecration being led by Bishop Keenan, new vistas have opened up even for Blythe Kaufman. She said, “Initially I thought the audience was primarily young people, and now I am seeing it has a much wider audience with a special connection to priests who have the ability to use the book themselves and invite those in their parishes, both adults and children, to join them.”

She now is emphasizing a wider audience. As she writes, “It is challenging to cultivate holiness with the multitude of distractions and the secularism that are ubiquitous today. We have a Heavenly Mother who wishes to help us to find the straight path to her Son. But we need to ask for her help. This Consecration journey is the request we make to Our Blessed Mother for such assistance.”

The way the Consecration “weaves the principal components of the St. Louis de Montfort Consecration through a lens of spirituality identified with St. Thérèse, the Little Flower. It is characterized by simplicity, confidence, and trust. Adults, priests and children will find a fruitful journey ahead!”

The Diocese of Paisley in Scotland is about to prove that.