SDG Reviews ‘Resurrection’: A Sense of Revelation Is Lacking 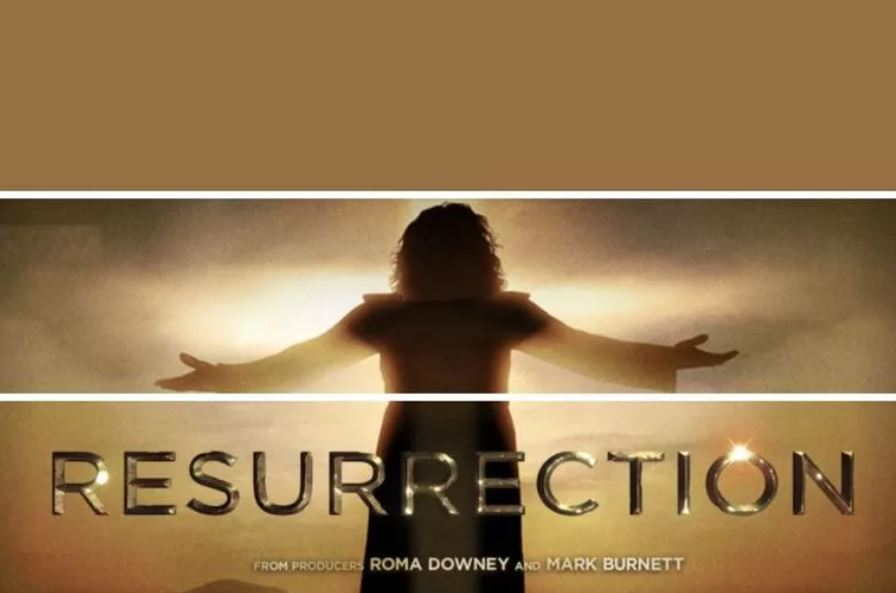 SDG Reviews ‘Resurrection’: A Sense of Revelation Is Lacking

Like other LightWorkers productions, ‘Resurrection’ fails to evoke the surprise and newness of Jesus’ words and actions.

The Bible world of Roma Downey and Mark Burnett’s LightWorkers Media productions sometimes seems not unlike a movie about Shakespeare in which you hear lines like “To be or not to be, that is the question” and “All the world’s a stage, and all the men and women merely players,” but everyone seems to have heard them already. There’s no sense of revelation or discovery; no one is struck by them or finds them intriguing.

In the 2014 Jesus movie Son of God (adapted from the last few episodes of the 2013 miniseries The Bible), Jesus rebukes a hotheaded Peter with the novel words “Turn the other cheek.” When Jesus said that in the Gospels, this provocative idea required several verses of explanation and context, but in Son of God Peter understands right away, as if it were already a familiar cliché.

In Resurrection (adapted from the first few episodes of the sequel series A.D. The Bible Continues, and thus a sequel of sorts to Son of God), Simon Peter himself (British actor Adam Levy), talking to a Zealot resistance fighter, glibly throws out “Live by the sword and you die by the sword.”

Peter does this, strikingly, on the morning after the Crucifixion, with no hint of the freshness of the wound those words should represent for him — considering they were Jesus’ last words to him in the Garden of Gethsemane a day and a half earlier.

On Thursday night it had been Peter, sword in hand, who wanted to fight until Jesus rebuked him. Now, hardly more than a day later, Peter serenely repeats those words like a confirmed pacifist who has never thought otherwise.

“We are fishermen,” he smiles, “not fighters.” Just imagine, fishermen fighting! (There was a missed opportunity here: What if Peter had ruefully said, as much to himself as to the other man, “We were called to be fishers of men, not to fight them”?)

I think the most banal such moment in a LightWorkers production may have come in an exchange in the 2016 Ben-Hur remake between Jesus and the protagonist, whose blandly anachronistic response to one of Jesus’ most revolutionary demands — “Love your enemies” — was “That’s very progressive.”

It’s not only Jesus’ challenging teachings that are taken for granted.

In an understandable but misleading move common to many Jesus movies, Old Testament Scriptures — notably Isaiah 53 — that after Jesus were seen to have Messianic significance fulfilled in Jesus are here explicitly applied to Jesus at the moment of their fulfillment.

The moment Caiaphas (Richard Coyle) and his wife, Leah (Jodhi May), learn that Jesus’ body was not left for wild dogs, but buried in the tomb of Joseph of Arimathea (Kevin Doyle), Caiaphas and Leah are immediately piqued that Joseph has given the appearance of fulfilling the prophecy about the Messiah being “with a rich man in his death” (Isaiah 53:9).

In reality, Isaiah 53 wasn’t generally understood in Jesus’ day as a Messianic prophecy, for the obvious reason that the Messiah wasn’t expected to suffer and die. This is why crucifying would-be messiahs was an effective strategy and why the risen Jesus, on the Emmaus road, had to explain to his disciples from the Scriptures it was “necessary that the Christ should suffer these things” (Luke 24:26).

Such storytelling flattens the arc of divine Revelation, the gradual unfolding of God’s design in history, rather than dramatizing it. Everything takes place in a homogenous, undifferentiated “Bible times,” which is not as culturally different from our own times as you might expect.

The characters’ arcs are likewise flattened, at least in Resurrection. The main characters — Peter, Caiaphas, Pontius Pilate (Vincent Regan), John (Babou Ceesay), Mary Magdalene (Chipo Chung) and the Mother of Jesus (Greta Scacchi) — are in the end pretty much who they were when we first meet them.

Considering what they’ve been through by the end, that’s extraordinary. Perhaps it’s partly because of the truncated storyline, which appears to follow only the first three episodes of A.D. The Bible Continues.

Still, having gone from denying Jesus three times to the threefold recommission of John 21 and on to Pentecost and the beginnings of the Church with miracles and persecution, Peter in particular has been on a journey.

Realizing that he denied the Lord three times just as Jesus predicted, Peter is chagrined, but not crushed by guilt or shattered by the revelation of his own cowardice and frailty. He’s melancholy about Jesus’ death — and put out at their having wasted the last three years of their lives — but not broken or despairing that the light has gone out of the world.

Peter is awestruck by Jesus’ return, but not shamefaced about his denials — which means he isn’t overwhelmed by the fathomless grace of the threefold recommission. He doesn’t seem at a loss or frightened after the Ascension, so there’s not a lot of room for the descent of the Holy Spirit to make a new man of him.

Peter does get a speech about feeling pain and guilt and shame, but his character isn’t written or acted that way. The tone throughout is earnest, but the emotions are shallow. Very little feels spontaneous.

There are a few nice touches.

I like how, when Peter first returns to the Upper Room after the Crucifixion and meets John, Peter must ask John if Jesus was crucified, because Peter wasn’t there to see it.

This moment is ironically mirrored in what might be the film’s best scene, with Thomas (Jóhannes Haukur Jóhannesson) finally returning to the Upper Room on Sunday moments after Jesus’ first appearance to the other 10.

Jesus’ appearance and disappearance are gracefully handled with low-key camerawork and blocking. One moment Peter is giving that unconvincing speech about feeling pain and guilt — and then the Lord’s hand is on his shoulder, and everyone is staring incredulously as Jesus (Argentine actor Juan Pablo Di Pace) smiles at them.

When Jesus breaks the ice by asking if there’s any food, there’s a comic scramble to bring him bread. A knock at the door announces Thomas’ arrival — but when they turn around, Jesus is gone.

And then Thomas — blithely unaware of the transcendent experience he has just missed — launches into a breezy, slightly self-impressed account of his close calls making his way back to the Upper Room.

Even when he finally notices the expressions around him and inquires, John starts to say, “Jesus …” Thomas still misunderstands. “I know,” he replies, meaning that he has already been told Jesus was crucified.

The entertaining bathos of this exchange is the film’s best character moment. (I was pleasantly reminded of the comic bit in Mission: Impossible — Ghost Protocol immediately after the big set piece with Ethan Hunt running down the face of the Burj Khalifa, when Simon Pegg’s Benji reappears, chortling, “That was not easy, but I did it! What’d I miss?”)

There are a few drily humorous lines, mostly given to Pilate.

When Caiaphas darkly warns that the crucifixion won’t put an end to the trouble about Jesus, Pilate deadpans, “It usually does.” And when Caiaphas protests that Pilate must have known that giving Joseph of Arimathea permission to bury Jesus would cause conflict in the Sanhedrin, Pilate answers, “Never crossed my mind,” though this was in fact his intent in granting Joseph’s petition alongside Caiaphas’ petition to ensure Jesus’ death by sundown.

Regan’s world-weary performance as Pilate is the most satisfying. As Caiaphas, English actor Coyle is very nearly a one-dimensional villain, while May is more interesting as Caiaphas’ wife, something of a Lady Macbeth type. (Whatever concerns around anti-Semitism the filmmakers may have had didn’t lead them to nuance Jesus’ Jewish opposition.)

As the Virgin Mary, alas, Scacchi isn’t given much to do but look anxious a lot. (There are three separate reaction shots of Mary wincing and crying out for each of the three nails going in. The nails — which we see in closeup being forged and brought to Calvary — are a particular focus until they aren’t; nothing is made of taking out the nails or of what happened to them afterward.)

Semi-colorblind casting is an interesting choice. Many of the cast are British or European, but James and John, Mary Magdalene and the angel that rolls away the stone (and meets Jesus at the Ascension) are played by actors with African heritage, while Matthew and Jesus have Hispanic/Latino heritage.

I could write a book chapter on the film’s wild liberties with the chronology of the biblical narratives, from the startling opening scene conflating Jesus’ trial before the Sanhedrin, the crowd shouting “Crucify him,” and Peter’s three denials into a single event to delaying Jesus’ appearance of Mary Magdalene until after she ran back to Peter and John to report the tomb empty. (Some of this works better than others.)

More notable to me is the omission of the sacramental elements associated with Pentecost and the “little Pentecost” of John 20 — an odd elision from an ostensibly Catholic production company.

Although Jesus’ first appearance to the 10 is my favorite scene, Jesus breathing on the 10 and authorizing them to forgive sins doesn’t appear. Far more problematically, the anticlimactic Pentecost sequence has Peter turning on a dime from preaching to the crowd to marching to the Temple to heal the crippled beggar. No one is baptized; baptism isn’t even mentioned.

A fundamental question for any biblical film is: Does it ultimately add to or detract from the events it covers? Does it illuminate the story or obscure it? Is our understanding of the biblical material more enriched or more clouded? Is our imaginative access to the world of the story deepened or muddied?

For me, Resurrection detracts more than it adds. Those who are content with a rehearsal of material they already know well and are willing to overlook substantial departures from the material may be edified. By my lights, that’s not enough.

Caveat Spectator: Some graphic Passion and Crucifixion imagery; brief violence and a mass execution. Teens and up.

Palm Sunday and Looking to the Pas...