Seeing Jesus Through the Eyes of Mary 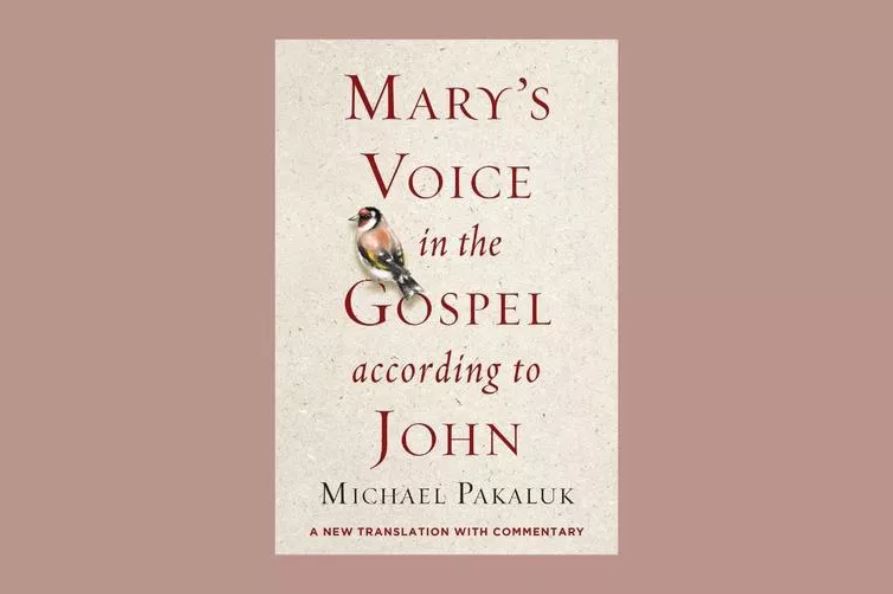 Seeing Jesus Through the Eyes of Mary

COMMENTARY: Message of new book that offers a rich, multilayered filter through which to read the Gospel of John: ‘Lectio divina’ beats board games.

Mary’s Voice in the Gospel of John

A New Translation With Commentary

I have always enjoyed board games and have found them a great resource for socializing and relaxation during COVID-19 isolation, so much so that I gave them up for Lent.

This has led to an interesting discovery, which is that, when using Michael Pakaluk’s Mary’s Voice in the Gospel of John, I had more fun doing lectio divina than playing “Quirkle” or “Rummikub.”

The premise of Mary’s Voice is one that has likely occurred to more than a few readers of the Gospel of John — that Mary had great influence on the content of John’s Gospel (xv). In fact, years ago when the thought occurred to me, I proposed to a well-known biblical scholar that the Gospel of John might also be deserved to be called the “Gospel of Mary,” since John and Mary likely spent decades together, decades that surely were consumed with comparing “notes” about Jesus and pondering what he said and how best to present him and his message to others. I expressed the hope that the scholar might write that book. Aghast, he declared it would be professional suicide since it couldn’t be a book of “scholarship.”

Thankfully, Pakaluk’s book doesn’t strive or pretend to be a book of scholarship. Pakaluk quite obviously has consulted other translations and commentaries on the Gospel of John, but the book is refreshingly free from the clutter of footnotes, except largely and sparingly to works of St. John Henry Newman (more about this momentarily). (Let it be clear, scholarly commentaries have great value, but seeing how a text reads, interpreted through a governing principle, is remarkably illuminating.)

In addition, Pakaluk claims that Mary exercised four “modes” of influence. 1) He maintains that John’s was a deferential personality and thus at times he emphasizes what were likely to be Mary’s preferences or to pick up what especially interested her; 2) John echoes the “familiar” tone that Mary had with Jesus and his words; 3) John was attracted to Mary’s love for Jesus and the beauty of her thought; and 4) John would have been shaped by Jesus’ love for Mary and shared Jesus’ willingness to be taught and formed by her (xxvii).

Pakaluk also identifies six “roles” that Mary occupied (Theotokos [or God-bearer], woman, mother, virgin, spouse and handmaiden) and states that “if a particular feature of John’s Gospel issues from the viewpoint of someone who occupied one of these roles that John did not occupy, then this feature can be ascribed to Mary’s influence” (xxviii).

It is very enjoyable to see how Pakaluk employs these interpretive principles: They really do illuminate the text. It has been a delight for me to analyze several of his interpretations of passages with female friends. We agreed with much of what he said but also thought sometimes we saw more or different elements than he saw. What fun it would be to have a group of males and females reading Pakaluk’s text and seeing if interpretations were influenced by a “male” or “female” perspective!

For instance, whereas Pakaluk accepts the common view that Jesus was “rebuking” Mary at Cana, a friend and I found no tension between Mary and Jesus at Cana. They were communicating; they understood readily what each was asking and saying because of their intimate relationship. We found no curtness in Jesus’ statement, “Woman, what is that to you and to me? My hour has not yet come,” which in this context seems to mean that it is not the time for him to perform a miracle (rather than a reference to his passion). But Jesus does perform a miracle, so it seems in fact that his hour had come, perhaps precisely because Mary asked him to perform one. Perhaps Jesus wanted to extend to Mary the huge — and fitting — courtesy of allowing her to launch him on his work of mercy. Attending to the needs of the bride and groom at a wedding is a distinctively feminine touch. Jesus wanted her to notice and to feel free to ask and perhaps even teased her about “pushing” him a bit (which is a woman’s job, isn’t it?). She clearly took what he said as a “Yes.” Get that? As a Yes. Mary did not take his statement as a “rebuke.” (Really, would Jesus rebuke his mother, except in a tender, teasing way?) Perhaps she “heard” an unspoken communication; after “My hour has not yet come” she “hears” him saying “or has it? What you want, I want.”

The story of Cana is certainly one Mary preserved exactly in her mind and told it to John, who tells it to us. Our analysis corresponds somewhat with Pakaluk’s and what he cites from Newman, but ultimately finds a more intimate communication happening between the lines. The kinds of things women tend to intuit are often between the lines. Indeed, in Pakaluk’s analysis of the interaction of Jesus with the Samaritan woman at the well, he makes the incident come alive by noting that the exchange displays a number of playful moments. I think those are present in the Cana miracle as well.

Another friend and I had a great time with John 8:12-59. Hearing this as a story shaped through Mary’s perspective brought out even more how much of it was stressing who Jesus’ father was. Pakaluk points out how offensive was the statement made by the Jews: “We’re not the ones begotten from fornication” (41). As Pakaluk notes, “these critics use their own profession of loyalty to God as a means of accusing Jesus of being an illegitimate child with two fathers (Joseph and someone else). Obviously this coarse accusation would shock and sting Mary” (119). We read the whole discourse with the supposition (new to us) that word may have gotten around that Joseph was not the biological father of Jesus and we heard Jesus emphatically identifying God as his father, which explanation, one hopes, would free Mary from the charge of fornication and elevate rather than degrade her.

It may be inappropriate to use this review to argue for alternative readings to those provided by Pakaluk. But I hope my approach makes people hurry to get a copy (I have bought 10 for gifts) since they should want to see what treasures they might discover with Pakaluk’s aid — either as a guide or a foil. The way Pakaluk writes leads one to believe he would welcome alternate interpretations to be offered and tested.

Let me say something about Pakaluk’s reliance upon Newman in his comments. In private correspondence he told me he had a whole section on Newman but judged it might be disproportionate. I wish he had kept it and at least will publish it somewhere. Among other reasons for his reliance on Newman is this: “It was from Newman that I learned to read Scripture, during a year in which for spiritual reading I worked through all eight volumes of the Parochial and Plain Sermons. Of course I had read Scripture a lot before then. But Newman had some kind of special genius for seeing the persons and realities of Scripture, which everyone recognizes in those sermons, and I’ve tried to imbibe it. He is the spiritual father of the book.”

Pakaluk’s book on Mary is creative and provocative. His translation makes the conversations between Jesus and his interlocutors come alive. One really feels a part of the event and hears the voice of Jesus more authentically — and, of course, the voice of Mary. This new genre of biblical commentary is one I think we are ready for: People have more and more been reading Scripture and learning how to do lectio divina. We are ready to ponder the genesis of the text and explore such interesting theses as those put forward by Pakaluk.

(I know you are waiting for this). Yes, board games are fun, but getting closer to Jesus through fresh probing of biblical texts is even better.

Divine Mercy: The Great Grace That...

On Divine Mercy Sunday and Every D... 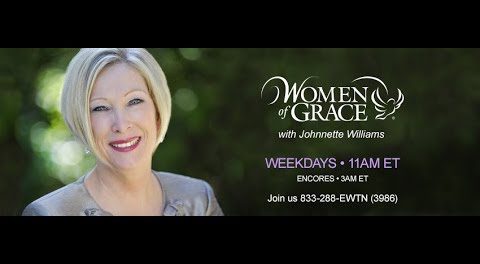 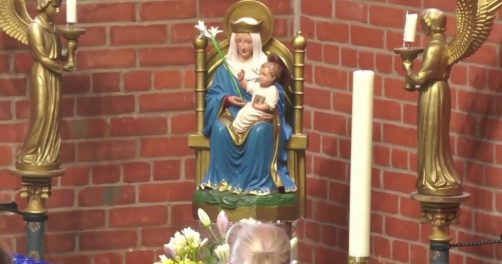 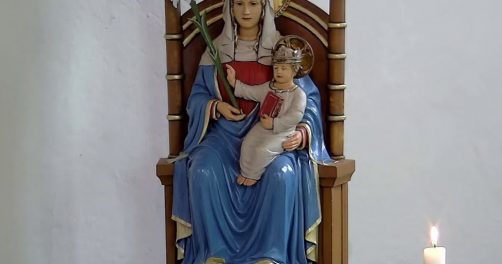 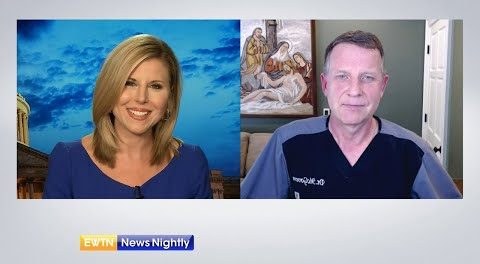 “Relocatiō”: Why These Families Moved Across the Country to Live in a Catholic Community