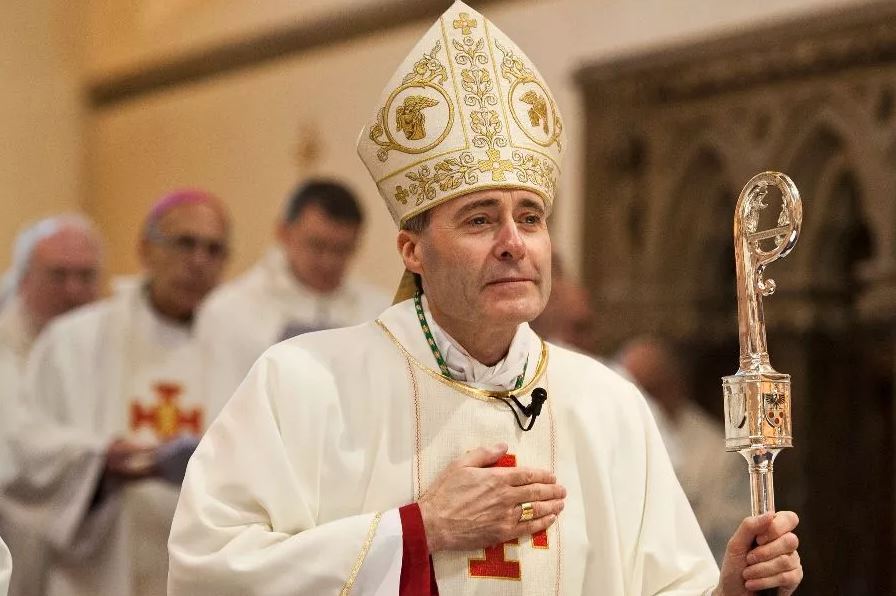 “Every Catholic Christian hopes to receive the Sacraments and be accompanied by the prayer of the Church in the final crisis of our lives,” Bishop Davies said.

SHREWSBURY, England — A Catholic bishop called on Tuesday for greater recognition of the last rites as an “emergency service” in the wake of the killing of British lawmaker Sir David Amess.

Bishop Mark Davies of Shrewsbury, western England, made the appeal on Oct. 19 after police reportedly turned away a priest who sought to administer the last rites to the Catholic Member of Parliament at the scene of the attack in Leigh-on-Sea, Essex.

“Every Catholic Christian hopes to receive the Sacraments and be accompanied by the prayer of the Church in the final crisis of our lives,” Bishop Davies said.

“Every believing Catholic desires to hear Christ’s words of pardon and absolution for the last time; to be strengthened by the grace of anointing; accompanied by the assurance of the Church’s prayer and whenever possible to receive Holy Communion.”

He continued: “This is something well understood in hospitals and care homes, yet the events following the murderous assault on Sir David Amess suggest this is not always comprehended in emergency situations.”

“I hope a better understanding of the eternal significance of the hour of death for Christians and the Church’s ministry as an ‘emergency service’ may result from this terrible tragedy. May Sir David rest in peace.”

Father Jeff Woolnough, the pastor of St. Peter’s Catholic Church, Eastwood, went to Belfairs Methodist Church on Oct. 15 after he heard that Amess had been stabbed during a meeting with constituents.

According to reports, a police officer outside the church relayed his request to enter the building, but the priest was not permitted to enter. He prayed the rosary outside the police cordon instead. Police arrested a 25-year-old man at the scene on suspicion of murder. The BBC said that the suspect, currently being held at a London police station under the Terrorism Act 2000, is Ali Harbi Ali, a British national of Somali descent.

Paramedics attended to Amess, who was stabbed multiple times, for more than two-and-a-half hours before an air ambulance arrived to take him to a hospital, the BBC reported.

In response to inquiries, Essex Police stressed that it was “of the utmost importance that we preserve the integrity of a crime scene and allow emergency services to tend to those in need.”

“A cordon is put in place to secure and prevent contamination of the area. Access into a scene is at the discretion of the investigating officers,” it said.

“This is a fundamental part of any investigation to ensure the best possible chance of securing justice for any victim and their family.”

The journalist Melanie McDonagh criticized the police’s decision not to admit Father Woolnough to the crime scene.

“The most troubling element of the [Essex Police] statement is that the police wanted to ‘allow the emergency services to tend to those in need.’ A priest is an emergency service,” she wrote in the British weekly The Spectator on Oct. 16.

“In the case of Sir David, the priest was someone who could help see him into the next world, not just keep him in this one. You don’t have to share a belief in the efficacy of confession to go along with this; you just need a very elementary knowledge of and respect for the faith to refrain from standing between a confessor and a dying man.”

Writing in the Telegraph on Oct. 18, the journalist Tim Stanley noted that according to the College of Policing, a professional body for the police in England and Wales, there is no national guidance on priests administering the last rites.

“The lack of a national policy on the last rites implies that whether or not a priest gets access to a dying person might depend upon circumstances (understandable, because one doesn’t want to impede the police from doing their job) — or else, which is far less forgivable, upon the religious literacy of the individual officer on duty,” he commented, calling the absense of guidelines “totally unacceptable.”

The Catechism of the Catholic Church says: “In addition to the Anointing of the Sick, the Church offers those who are about to leave this life the Eucharist as viaticum. Communion in the body and blood of Christ, received at this moment of ‘passing over’ to the Father, has a particular significance and importance.”

Speaking in the House of Commons, the lower house of the U.K. Parliament, on Oct. 19, the Catholic MP Mike Kane suggested that lawmakers pass an “Amess amendment” guaranteeing priests access to those requiring last rites.

“While I have the attention of those on the Front Benches [government ministers], Catholics believe that extreme unction helps guide the soul to God after death, so maybe we could come up with an Amess amendment so that no matter where it is, in a care home or at a crime scene, Members, or anybody, can receive that sacrament.”

Ex-Anglican Bishop: As a Catholic,...