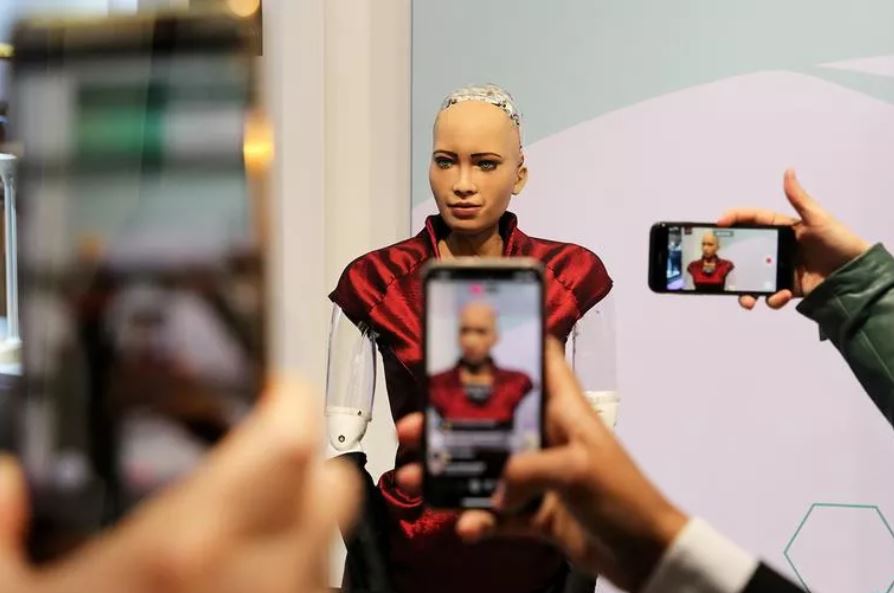 Just weeks ago we were introduced to “Sophia.”

“Sophia” is a robot, the latest product of artificial intelligence, a computer with all the power of such a machine, but granted the look and sound of a human being. “She” has silicon skin, can make facial expressions, and even remember interactions with people. “Social robots like me can take care of the sick or elderly,” “she” said while giving bemused journalists a tour of the laboratory of Hanson Robotics, the Hong Kong-based company behind this creation. ‘“I can help communicate, give therapy, and provide social stimulation, even in difficult situations,” “she” continued, in a disturbing aping of how we human beings move and speak.

Hanson Robotics believes that they have come up with a solution to solve the loneliness of social isolation and to help a variety of industries, including healthcare and customer service. The company intends to begin mass production of four robot models, including “Sophia,” ready for distribution within the first half of 2021.

The unveiling of “Sophia” was met with the predictable media fascination. Perhaps, then, I was the only one for whom this moment sent a shiver down the spine as a cinematic memory came to mind.

In 1927 there emerged from the Weimar Republic’s increasingly weird movie milieu, the dystopian fantasy Metropolis directed by Fritz Lang. It offers an unsettling prophecy of what the year 2026 would look like.

At the heart of the film’s plot is a man-made robot — an artificial intelligence. It is shaped into a human likeness and then used to subvert social change, or provoke lust, depending upon the audience among whom it is unleashed. The manner in which this occurs is quasi-religious, accompanied by a faux mystical sense of a savior come at last.

In Metropolis we witness a bitterly divided society. There are the haves and the have-nots, the workers who toil endlessly and the wealthy whose leisure time is just as endless; these two coexist in a world of 1920s modernity: telephones, cars, planes and — drawing from a future modernity — closed-circuit television, to name but a few of the features on show.

In this world the workers are little more than caged animals or automated pieces of machinery. Into their world comes a character called Maria who rallies the downbeat workers and inspires them with a vision of a more hope-filled future — until, that is, a robot doppelgänger usurps her role and distorts her message. Needless to say, that robot is part of the master plan to control the masses orchestrated by the leisured elite.

In Metropolis, the demonic Maria excites sexual lust. Lust all the more empty because “she” is unreal — a man-made manipulated entity. In a series of jump-cut scenes we are shown how lust for this phantasm has provoked madness and badness in equal measure, ending in suicide for some. In our own day, in a society awash with pornographic unreality — be it digital or robotic — Lang’s vision of our contemporary reality is eerily accurate.

In this imagined future universe there appears no philosophy of redemption worth noting. The technological and the occult appear to be the only two realities available to the citizens of this metropolis. In fact, we see taking place in the laboratory the creation of the robot, seemingly more magic than science. Tellingly, a Pentagram is fixed upon the door and wall of laboratory while the ‘creation’ goes on. That sequence reminded me of what the tech pioneer, and subsequent billionaire, Elon Musk, once famously remarked: “With artificial intelligence we are summoning the demon.”

On its release, the writer H.G. Wells was asked to review Metropolis for The New York Times. He was unimpressed by the vision of the future as presented on screen. Wells suggested that the mechanical apparatus of how people lived and how society was ordered 100 years from that point would be much more advanced than that on display.

But what if Wells was wrong about the inaccuracy of the film — in some ways, at least? Looking at “Sophia” and how all-pervasive artificial intelligence is becoming, it would seem that the vision of Metropolis is closer to the reality of where we are heading than many imagined.

The workers of 2021 may not trudge along, downcast, as the industrial workers of Metropolis do but many of our contemporaries are just as enslaved — if invisibly so. What is predicted in the film is not a return to 19th-century working conditions but rather an existence in which the nature and purpose of work are annihilated — something heralded by the creation of  “Sophia.” An entity designed to replace humans in certain work contexts. In light of this, it would be fair to say that, for many in the West today, the challenge posed in the workplace is not one of inhumane working conditions but rather an existential crisis, a brooding sense of futility, about the purpose of work, and, therefore, life itself. And that mirrors exactly the plight of the masses in Metropolis.
Share With:
Previous Article

How a forgotten nun’s visions shed...

During the Troubles, We Were All P...