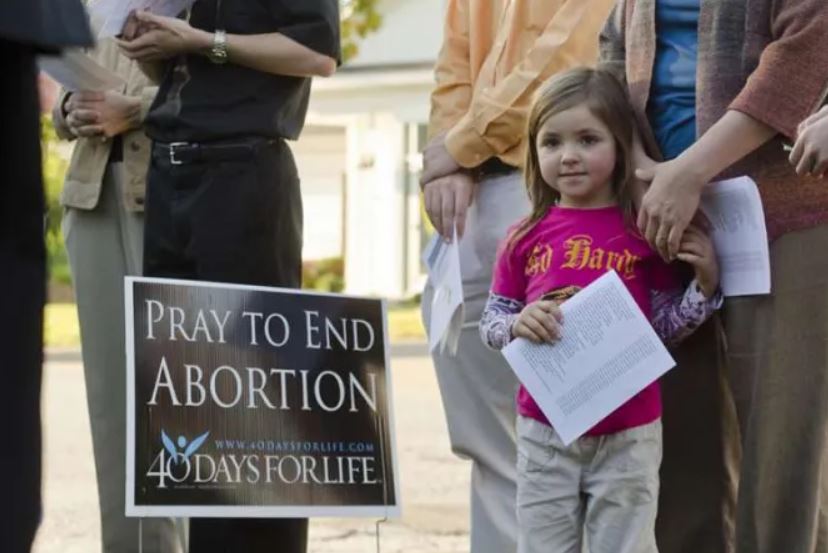 People praying at an abortion clinic. / Diocese of Saginaw, CC BY ND 2.0.

The bill was introduced May 21 by the PSOE’s coalition in the Congress of Deputies, the lower house of Spain’s legislature, would criminalize “harassing women going to clinics for the voluntary interruption of pregnancy.”

Penalties for what would be deemed harassment would include jail terms of three months to a year, or community service from 31 to 80 days. Depending on circumstances, an individual could also be barred from a particular location for between six months and three years.

In the exposition of motives for introducing the bill, the PSOE characterized the “harassment” of pro-life witness at abortion clinics as “approaching women with photographs, model fetuses, and proclamations against abortion … the objective is for the women to change their decision through coercion, intimidation, and harassment.”

The socialist parliamentary group said it “considers it essential to guarantee a safety zone” around abortion clinics.

Anyone promoting, favoring, or participating in demonstrations near abortion clinics would be subject to penalties.

One outreach the bill could ban is Life Ambulance, which offers “a free ultrasound in front of the abortion clinic to show the mother the reality of her child and the heartbeat of her baby.”

The mobile ultrasound initiative has “all the legal permits and certified medical professionals” to provide the service.

Life Ambulance has launched an online petition to oppose the bill, saying it “violates the right to freedom of speech, the right to demonstrate and the mother’s right to know the reality of abortion.”

Several locales have in recent years considered or adopted “buffer zones” around abortion clinics that limit free speech in the protected areas.

Pro-choice activists in 2020 called on the Scottish government to ban prayer and public discussion of abortion in the vicinity of the country’s abortion clinics.

Proposals for buffer zones around abortion clinics throughout England and Wales were rejected as disproportionate by the then-British Home Secretary in September 2018, after finding that most abortion protests are peaceful and passive.

Sajid Javid said that after reviewing the evidence, which included “upsetting examples of harassment … what is clear from the evidence we gathered is that these activities are not the norm, and predominantly, anti-abortion activities are more passive in nature.”

The typical activities of those protesting outside of abortion clinics in England and Wales “include praying, displaying banners and handing out leaflets,” Javid noted.

Javid said that there are already laws in place to protect people against intimidation and harassment in public spaces, including the Protection from Harassment Act 1997, which extends to Scotland, and the Public Order Act 1986.

In England, a buffer zone was imposed by Ealing Council, in west London, around a Marie Stopes abortion clinic in April 2018. The zone prevents any pro-life gathering or speech, including prayer, within about 330 feet of the clinic.

The Ealing buffer zone, which was upheld by the Court of Appeal of England and Wales in August 2019, was cited by Javid as an example of a local government using civil legislation “to restrict harmful protest activities,” rather than a nationwide policy.

Shortly after the Ealing buffer zone was adopted, Bishop Philip Egan of Portsmouth said that “to remove from the environment of the abortion clinics alternative voices is to limit freedom of choice. Indeed, research shows that many women have been grateful for the last-minute support they have thereby received.”

“The imposition of ‘no-prayer zones’ outside clinics – I mean prayerful vigil, not militant or disruptive action – is unhelpful, unjust and unnecessary,” Bishop Egan said.

How the Pandemic Gave Me a New App...