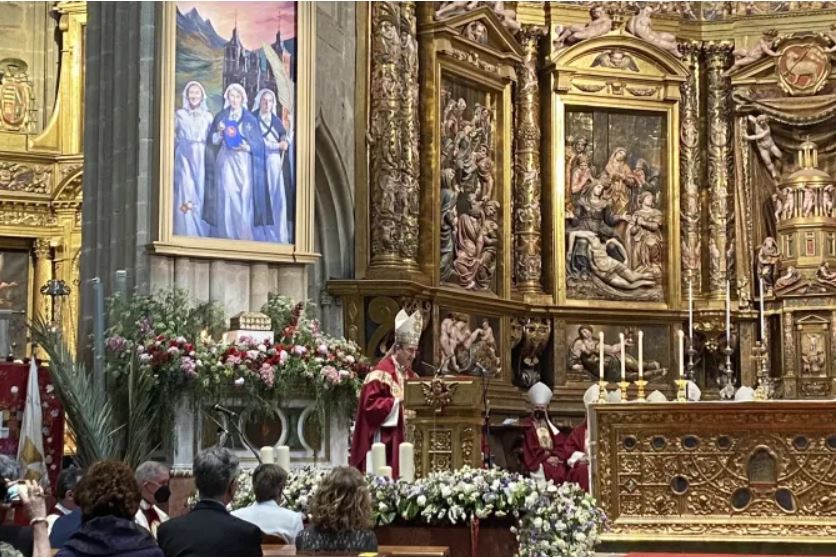 The Mass of Beatification for Maria Pilar Gullón Yturriaga and two companions at Astorga Cathedral, Astorga, Spain, May 29, 2021. Credit: Diocese of Astorga.

Three laywomen who were martyred near Astorga in 1936 amid the Spanish Civil War were beatified on Saturday.

Pilar Gullón, Olga Monteserín, and Octavia Iglesias were beatified May 29 in Astorga Cathedral. All three were volunteer Red Cross nurses. When the Somiedo hospital to which they were assigned came under attack, they didn’t flee, nor during their captivity did they renounce their faith despite the outrages they were subjected to by the Republican militiamen. They were briefly imprisoned, and then executed Oct. 28, 1936.

The Spanish Civil War was fought from 1936 to 1939 between the Nationalist forces, led by Francisco Franco, and the Republican faction. During the war, Republicans martyred thousands of clerics, religious, and laity; of these, 11 have been canonized, and more than 1,900 beatified.

Bishop Jesús Fernández González of Astorga said a Mass of thanksgiving for the beatification at St. Peter’s parish in Ponferrada May 30.

“Today we are especially grateful and moved by the testimony of faith and dedication given by the three martyrs of Astorga. They were confident in God’s love and his provident care and didn’t let themselves be overcome by fear at any time, despite the persecution that loomed over the Church,” Bishop Fernández said during his May 30 homily.

“They ignored the warnings, they didn’t hide the religious articles they were wearing, they prayed without fail, they shouted Viva Cristo Rey, their love nourished by the Eucharist,” the bishop said.

“In contemplating Christ on the cross” and “accompanied by the tender closeness of Mary, they learned to love those in need with maternal love and in their final moments they loved not only the wounded, but even their executioners as Jesus did.”

Bishop Fernández also noted that the three martyrs were aware “of participating in the divine life through baptism and of being called to identify with Jesus Christ,” thus “cultivating their faith from the very beginning, handed on to them through their family life, and also through the parishes, the associations to which they belonged, they grew as disciples, prioritizing God’s plans over their own and the proposals made to them to save their physical life.”

At the moment of their martyrdom, the three nurses “embraced the cross and gave their lives as the supreme witness of following Christ,” he said.

Bishop Fernández encouraged the faithful to glorify God for the martyrs’ “apostolic witness. Faithful to their lay vocation, they responded to the Lord’s call to transform the reality of the world according to the values of the Gospel.”

The bishop said these three women were affectionately devoted to their families and were  “exemplary in their charitable and social witness for those most in need, going beyond mere routine gestures.”

Bishop Fernández praised “their involvement in caring for the wounded in the violent conflict, their willingness to impartially serve either side in the fighting, their non-violent and forgiving attitude during their final moments.”

He stressed that the martyrs are “beacons that illuminate a way of living in society based on reconciliation, forgiveness and universal brotherhood.”

“Let us also invoke the Lord so that following in his footsteps and those of the three martyrs, Pilar, Olga and Octavia, and thanks to their intercession, he may increase in us the sense of providence, proper to the children of God, to make us disciples close to the Lord and strengthen our commitment to fundamental social structures such as the family, and also charitable institutions based on a culture of dialogue and encounter,” he prayed.

Ahead of pivotal Supreme Court dec...