St. Dominic entrusted this Marian icon to nuns in Rome 800 years ago 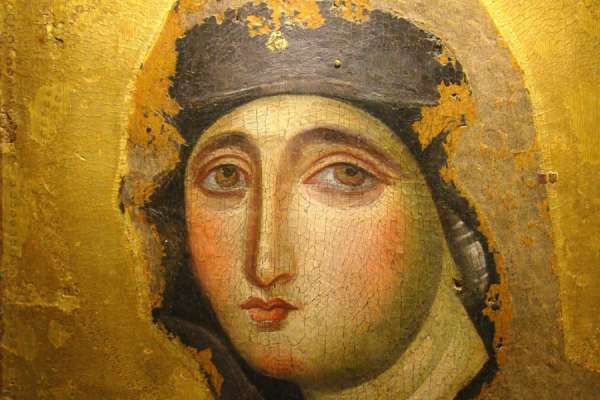 St. Dominic entrusted this Marian icon to nuns in Rome 800 years ago

Rome Newsroom, Feb 27, 2021 / 06:00 am (CNA).- Eight hundred years ago, a barefoot St. Dominic carried an icon of the Virgin Mary across Rome to entrust the Marian image to a new community of cloistered nuns, who have safeguarded the icon within the walls of their convent to this day.

The icon, known as the “Advocata,” can be found today in a small chapel on Rome’s highest hill, in the Church of Santa Maria del Rosario on Monte Mario.

As St. Dominic carried the limewood icon on the night of Sunday, February 28, 1221, two cardinals delegated by Pope Honorius III accompanied the founder of the Dominican Order, and 42 nuns followed in procession behind on their way to their new convent.

In their 800-year history, this Roman Dominican community of sisters has only moved twice: once in the 16th century and once in the 20th century. The nuns have been based at the Monte Mario convent since 1931.

Today there are eight Dominican nuns in the convent, who participate in Sunday Mass from behind a grille to the left of the altar. Next to them, lies their treasured Marian icon, also behind a grille. Visitors can venerate the icon immediately after Mass.

The convent closed to the public earlier this year after all of the sisters fell ill with COVID-19, but has since reopened following their recovery.

Even from behind the bars of the grille, the icon has a penetrating gaze. The image dates back to at least the 7th century and has been revered over the centuries as having been painted by St. Luke.

Before 1221, the icon had been kept in the convent of Santa Maria in Tempulo, close to the Appian Way, after having survived the iconoclasm in Constantinople that destroyed the church where it was formerly located.

The location of the icon today, in a small convent atop a steep hill beyond the reach of most tourists, has left it relatively unknown. After arriving at the convent, visitors access the church by passing through two narrow passageways.

Paul Badde, author of “The Face of God: The Rediscovery of the True Face of Jesus,” a book about the relic of Veronica’s veil, describes the relatively unknown Advocata icon as “a reflection of divine hiddenness itself.”

“It is almost as hidden as the Almighty was in his great saving deeds, from his ‘overshadowing’ of the Mother of God to the birth of his Son in a cave outside Bethlehem. Almost all other icons in Rome are better known,” he commented.

One of the most-visited Marian icons in Rome is the “Salus Populi Romani” in the Basilica of Santa Maria Maggiore in the bustling city center. Pope Francis makes a point of visiting the Marian icon upon his return from papal trips.

Benedict XVI prayed before the Advocata icon during a visit to the Monte Mario convent on June 24, 2010.

During his trip to the convent, Benedict XVI told the cloistered Dominican nuns: “Just as the heart circulates the blood and keeps the whole body alive, so your hidden life with Christ in prayer helps to sustain the Church.”

The photograph of Benedict XVI praying before the Madonna Advocata is courtesy of Vatican Media.

Priest Bursts into Tears During Ma...