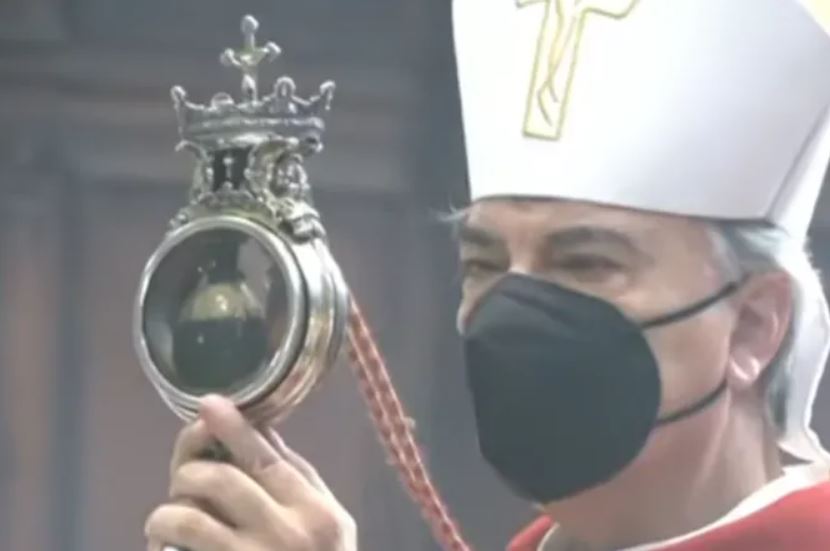 The blood of St. Januarius, patron of the Italian city of Naples, liquefied on Sunday.

The miraculous event took place in the city’s Cathedral of the Assumption of Mary during morning Mass on Sept. 19, the saint’s feast day.

Before the Mass, Naples Archbishop Domenico Battaglia went to the Royal Chapel of the Treasure of St. Januarius with Msgr. Vincenzo de Gregorio, the chapel’s abbot, and city mayor Luigi De Magistris.

Battaglia opened the safe containing a reliquary with a circular sealed vial filled with the third-century bishop’s blood.

During the miracle, the dried, red-colored mass confined to one side of the reliquary becomes blood that covers the entire glass. In local lore, the failure of the blood to liquefy signals war, famine, disease, or other disaster.

At 10 a.m. local time, the 58-year-old archbishop brought the reliquary to the cathedral’s high altar.

Battaglia moved the reliquary from side to side to show its changed state.

“The blood has liquefied,” he said.

After making the Sign of the Cross, signaling the start of the live-streamed Mass, he said: “We thank the Lord for this gift, for this sign that is so important for our community.”

In his homily, Battaglia, who was installed as archbishop of Naples on Feb. 2, urged Catholics to avoid superstition and to see in the saint’s blood a sign that points to the blood shed by Jesus to redeem humanity.

The bones and blood of St. Januarius — San Gennaro in Italian — are preserved as relics in Naples Cathedral. The bishop of the southern Italian city is believed to have been martyred during Diocletian persecution.

The reputed miracle is locally known and accepted, though it is yet to receive official Church recognition. The liquefaction traditionally happens at least three times a year: Sept. 19, the saint’s feast day, the first Saturday of May, and Dec. 16, the anniversary of the 1631 eruption of nearby Mount Vesuvius.

Preaching at Mass in Naples Cathedral on May 1, Battaglia urged people not to be overly “intrigued by the miracle” and “seized by the yearning to read in it good omens or ominous omens for our future.”

Regardless of whether the blood liquefies, he said, it should remind Catholics of the blood of Christ “in whose Paschal Mystery we still find ourselves and who is the only one who gives meaning to the great and intense icon of the liquefying blood.”

The archbishop, who was known as a “street priest” who was close to the poor before his elevation, recalled victims of the Camorra mafia and domestic violence, as well as lonely elderly people and the unemployed.

He said: “There is no social sore or communal wound that does not have the right of citizenship in this precious reliquary, the marvelous apex of the entire treasure of St. Januarius.”

“But don’t misunderstand me, I’m not talking about the precious stones, nor the gems set among golden miters, nor the silver busts of the saints. The real treasure of St. Januarius is his people, and, within them, those who sit on the margins of life, the last ones, the most fragile.”

The archbishop, known locally as Don Mimmo Battaglia, will receive the pallium on Sept. 27 from Archbishop Emil Paul Tscherrig, apostolic nuncio to Italy.

Before the final blessing at Sunday’s Mass, Battaglia walked down the cathedral’s nave and through its doors, where he held up the reliquary, blessing those gathered outside.