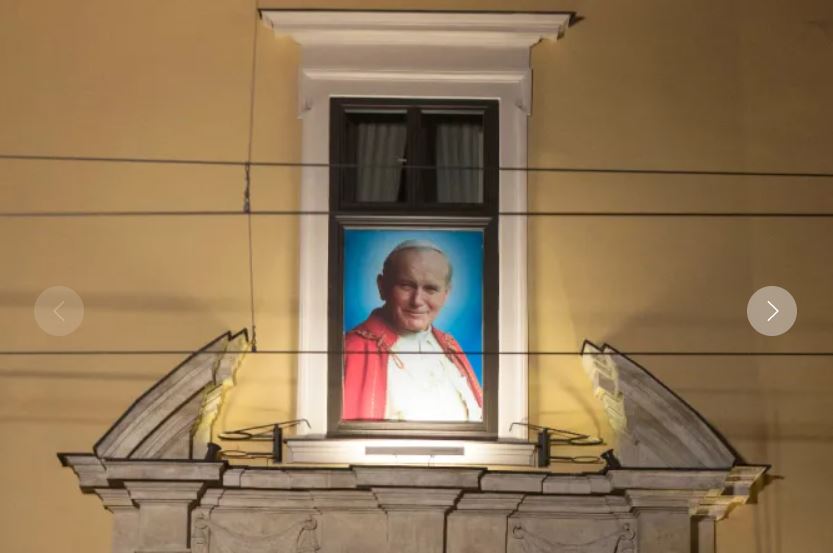 The former residence of St. John Paul II in the Polish city of Kraków has opened its doors to Ukrainian refugees.

The Catholic Archdiocese of Kraków said on March 9 that Archbishop Marek Jędraszewski had welcomed people fleeing the Ukraine war to the city’s Bishop’s Palace.

Karol Wojtyła, the future John Paul II, lived at residence from 1958 to 1978 when he was archbishop of Kraków.

He returned to the palace in 1979, after his election as pope, addressing young people from a window above the entrance, now known as the “Papal Window.” He also spoke from the window in 2002, during his ninth and final papal visit to his homeland.

Pope Francis greeted youngsters from the window in 2016.

Since the 14th century, Kraków’s bishops have resided at the palace, which is the city’s second largest after Wawel, the residence of Poland’s kings.

According to the U.N. refugee agency, more than 2.1 million people had fled Ukraine as of March 8. Almost 1.3 million of them have traveled to Poland.

The Archdiocese of Kraków said that every parish is involved in the effort to welcome refugees following the full-scale Russian invasion of Ukraine on Feb. 24.

It explained that several thousand refugees were currently being housed in rectories, pilgrim houses, religious houses, and other Church buildings.

Speaking at the Diocesan Sanctuary of St. John of God, Jędraszewski said: “As children of the same God, we are called to a particular fraternity and a sense of great solidarity, to generosity, to readiness to renounce what we have lived for the sake of those who come to us with one bag in hand and a child in the other.”

John Paul II, who led the Church until his death in 2005, became the first pope of the modern era to visit Ukraine in 2001.

In his 2004 message for the World Day of Migrants and Refugees, he wrote: “I deeply hope that every ecclesial community, made up of migrants and refugees and those who receive them and drawing inspiration from the sources of grace, will untiringly engage in the construction of peace. May no one let injustice, difficulties or inconvenience be a discouragement!”

“If the ‘dream’ of a peaceful world is shared by all, if the refugees’ and migrants’ contribution is properly evaluated, then humanity can become more and more of a universal family and our earth a true ‘common home.’”

The Miraculous ‘Mother of God of Z...