St. Joseph and the Sacrifice of the Mass 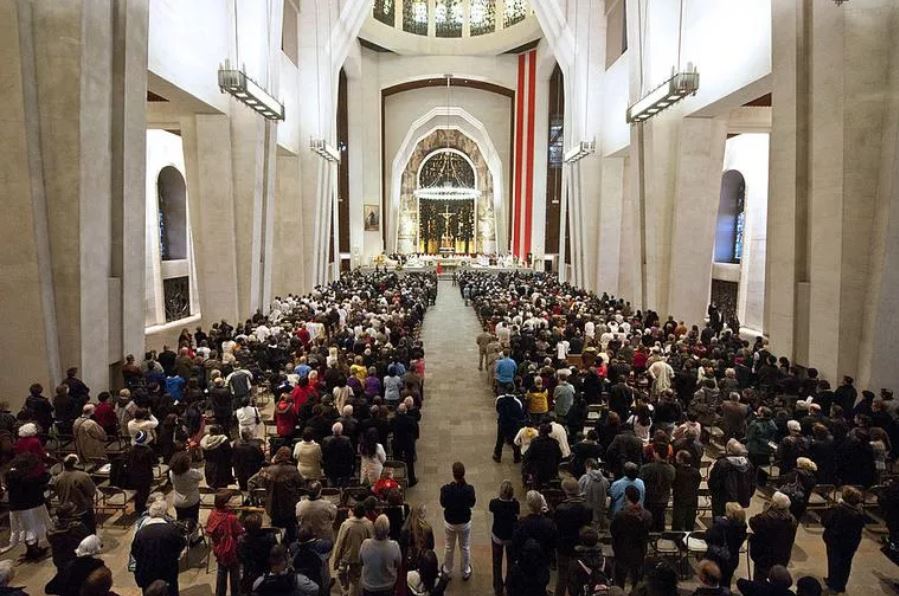 St. Joseph and the Sacrifice of the Mass

St. Joseph didn’t say a word in the Gospels, but his silent heroism speaks volumes not only about his role as “Guardian of the Redeemer” and “Patron of the Universal Church,” but also about his importance in the liturgical life of the Church.

Fittingly, perhaps, history says little about St. Joseph’s role in the liturgy — at least for the first millennium of the Church. From the early days of the Church, St. Joseph remained, for the most part, hidden within the liturgical celebrations that highlighted the important events of Jesus’ earthly life — such as Christmas, Epiphany and the Presentation at the Temple — at which he was present.

By about the year 900, however, St. Joseph began to be increasingly conspicuous in the life of the Church, until in 1962, when he was officially made part of the liturgy after Pope John XXIII added his name to the 1,400-year-old Canon of the Mass (Eucharistic Prayer I). More recently, Pope Benedict XVI proposed that the other Eucharistic Prayers found in the ordinary form of the Mass also include St. Joseph’s name, resulting in Pope Francis’ 2013 decree.

Although Pope John XXIII’s decision was not met with universal acclaim at the time, it seems providential that, every Sunday, the faithful have now recourse to the intercession of St. Joseph, whose model service as a husband and father provides an important witness to broken homes and broken marriages, which have increasingly become the norm in the late 20th and early 21st century.

But St. Joseph was not only a powerful intercessor within the liturgy; he also serves as a sterling model of piety. In his silent Gospel witness and in his patronage as protector of Christ and his Church, the carpenter from Nazareth might well be considered a universal patron of the liturgy. For even as this silent saint stands guard over the Holy Family, St. Joseph also guides Catholics around the world in deepening their love and understanding of the liturgy.

According to Lynn Boughton, adjunct professor at the Liturgical Institute at the University of St. Mary of the Lake, in Mundelein, Illinois, aside from his mention in Scripture, liturgical history contains little if anything about St. Joseph in the first millennium, as both the liturgical and devotional life in the Church had only begun to flower during that time.

“The earliest known calendar of the Church’s feast days, which bears the title Chronicon and was published in 354 A.D., contains no feast day of St. Joseph,” Boughton told the Register. “Nor does a transcription of prayers for Masses throughout the year provided in the Leonine/Verona Sacramentary, that was transcribed in about 560, have any calendar feasts specifically focused on St. Joseph.”

The late Father Richard Gilsdorf notes in his book Go to Joseph that there is some evidence of the early Church acknowledging St. Joseph, at least as far as sacred art and architecture are concerned.

“For instance, we do know of a painted image of him from the third century,” Father Gilsdorf writes, “and of a church erected in his honor by St. Helena at Nazareth in the fourth.”

“Since Joseph and Mary were not martyrs, they did not originally have feasts in the sanctoral course,” Boughton said.

Nonetheless, Boughton added, Mary and Joseph were given due honor in those “temporal” feasts in which they took part.

It was not until the seventh century, Boughton said, that other saints besides martyrs began to be included on the liturgical calendar, including Mary and Joseph.

What Pius IX did was name St. Joseph “Patron of the Universal Church,” she said.

“This is part of a recurring theme of popes urging devotion to St. Joseph.”

It was a pope’s own devotion to St. Joseph which led to making the saint an integral part of the liturgy. On Nov. 1, 1962, Pope John XXIII issued a decree (put into effect on Dec. 8 of that same year) to include St. Joseph’s name in the Canon.

The decision led to controversy, as some Church leaders at the time were opposed to the change. Dom Prosper Gueranger wrote in his 1885 book, Explanation of the Prayers and Ceremonies of the Holy Mass,

“ … holy Church recoiled from rehandling and making modifications, even of smaller details, in a Liturgical Prayer fixed and consecrated by Christian Antiquity.”

According to Peter Kwasniewski, a senior fellow at the St. Paul Center in Steubenville, Ohio, while in the minority, the opposition stood on principle regarding the prudence of what they saw as “tinkering” with the liturgy, and especially the Canon.

This relatively minor change, however, in Kwasniewski’s view, has had broad-reaching consequences by allowing precedent to play a part in further changing the liturgy in ways not sanctioned by the Second Vatican Council.

“For 1,400 years there was only one Eucharistic Prayer in the West; and for most of that time, in most places, it had not changed one bit,” Kwasniewski told the Register. “This papal modification to the centermost prayer of the Roman rite suggested that more radical changes were within reach, if only the pope would throw his weight behind them.

Paul VI succeeded John XXIII, and within only a few years, totally new Eucharistic Prayers were being introduced.”

But according to Mike Aquilina, vice president of the St. Paul Center, the addition of St. Joseph’s name to the Canon reflects a healthy development in the liturgy.

“Liturgy is often reformed from the bottom up, not the top down,” he told the Register. “Long before changes are imposed by papal authority, they’re requested and suggested by the devotion of ordinary people. This is how liturgy develops and remains fresh for the Church.”

In the 1966 book The Rhine Flows into the Tiber, Father Ralph Wiltgen notes that John XXIII’s decision to include St. Joseph in the Canon was in part a response to such requests from the faithful as ardent worldwide devotion to St. Joseph, beginning more than a century before, was coming to a head.

Father Wiltgen writes that Pope John XXIII was presented with a 75-page booklet providing a history of “sporadic but intensive campaigns, dating back to 1815, through which hundreds of thousands of signatures of the hierarchy and the laity had been gathered and sent to the Vatican” to have St. Joseph recognized in the liturgy.

In this way, Father Wiltgen added, “St. Joseph’s name after that of the Virgin Mary in the Canon of the Mass would, doctrinally and liturgically, give official recognition to St. Joseph’s eminence in sanctity, after Mary, over all other saints.”

In other ways, too, St. Joseph plays a part in liturgical life, according to Father Donald Calloway, author of Consecration to St. Joseph: The Wonders of Our Spiritual Father.

“Traditionally, each day of the week has been designated for a special emphasis when it comes to the liturgy, whether it’s Holy Mass or the Breviary, the readings for that day,” he told the Register. “For example … Saturday has always been Our Lady’s day. Sunday, of course, is dedicated to Our Lord — which is why they call it the Lord’s Day. But there is a day when we honor St. Joseph — and that day is Wednesday.”

The liturgical and devotional importance of Wednesday as St. Joseph’s day was also noted by Pope Francis in his December 2020 apostolic letter proclaiming the Year of St. Joseph, Patris Corde.

“Special prayers are offered to him each Wednesday and especially during the month of March, which is traditionally dedicated to him,” the Holy Father writes.

While feast days that occur on a Wednesday, such as Ash Wednesday, take precedence, Father Calloway said, in the regular liturgical celebrations for that day, the priest would celebrate Mass emphasizing the importance of St. Joseph.

“The priest would have a votive Mass, if he were able to, for that day,” he said, adding, “His homily would bring in St. Joseph, and they might even put a statue in the sanctuary or somewhere near the altar. The priest’s vestments would be St. Joseph-themed, if he had any such vestments. The chasuble, for instance, might have a lily or an image of St. Joseph on it.”

At any Mass, Aquilina said, St. Joseph’s spirit is also present in the presentation of the gifts.

Like the carpenter who became Jesus’ father on earth, the faithful can also bring their own works of human hands to the altar at Mass, Aquilina said, noting that, as Lumen Gentium, 34, states, Catholics come to Mass bringing their “works, prayers and apostolic endeavors,” their “ordinary married and family life” and daily occupations as “spiritual sacrifices acceptable to God through Jesus Christ.”

“When we work like St. Joseph, we come to see our work as united with the Holy Sacrifice,” Aquilina added. “We see it, too, as something we do for Jesus and Mary — to please them.”