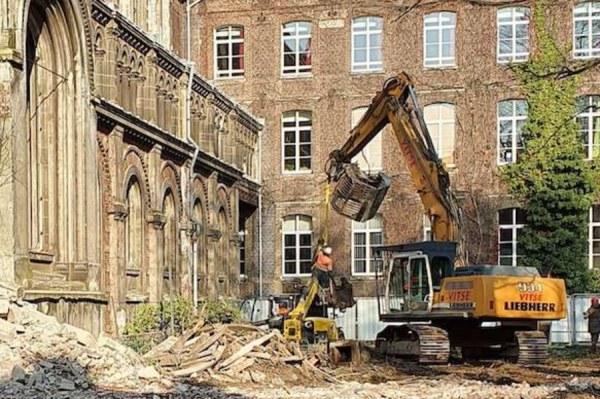 Rome Newsroom, Mar 11, 2021 / 12:00 pm (CNA).- Bulldozers have torn into a 135-year-old church dedicated to St. Joseph in northern France — the first of several church demolitions that could take place in the country in the coming months.

The Chapelle Saint-Joseph, built by the Jesuits in Lille between 1880 and 1886, is being bulldozed by the Catholic University of Lille to make way for a new student building. But the nearby Rameau Palace — designed by the same architect, Auguste Mourcou — is being preserved and restored.

A group appealed to the French Ministry of Culture to reclassify the church building as historical. But the ministry rejected the appeal, stressing that “giving up the demolition of the chapel would lead to the abandonment of an important project for the development of higher education, which represents an investment of 120 million euros [around $144 million].”

Urgences patrimoine, an organization that seeks to preserve French cultural heritage, collected 12,400 signatures on a petition to save the St. Joseph chapel. But the demolition process, captured on video, began in late February regardless.

Meanwhile, discussions have been held to replace the Church of Sainte-Germaine-Cousin in Calais, an early 20th-century building in the Art Deco style, with an apartment complex, according to CNA’s Italian language news partner, ACI Stampa.

The Diocese of Arras announced in August 2020 that the church would no longer be used due to maintenance costs. The church’s 28 stained-glass windows, created by master glassmaker Louis Barillet, have been registered as protected historic architecture with the French government since 1997.

Another church facing potential demolition is the Saint-Èloi du Poirier church, built in 1902 in Trith-Saint-Léger. Local authorities have said that tearing down the church would be less expensive than renovating it, which it estimates would cost around $958,000.

Members of the local community have written letters, made phone calls to authorities, and organized a town hall meeting in an attempt to save the church.

According to French law, local authorities have the final word as to whether to renovate or demolish churches after the French government appropriated all church property in 1907.

Learning Disabilities? Do Not Resu...