St. Joseph the Worker Reflects the Value of Labor 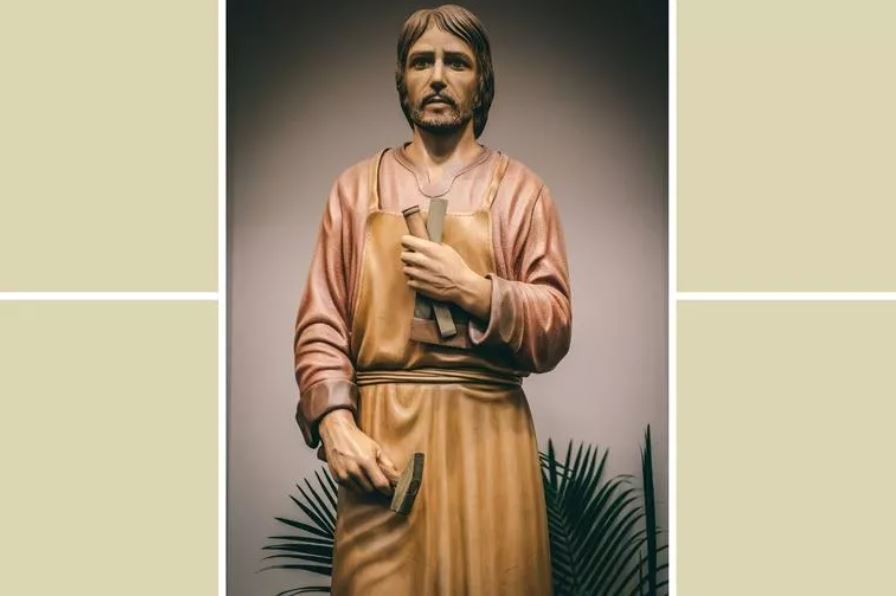 St. Joseph the Worker Reflects the Value of Labor

Trade schools train young men to be craftsmen like the earthly father of Jesus.

As Matthew Asselin learns about machine and systems technology, both in the classroom and on the job, he has thought about St. Joseph the craftsman who also worked with his hands.

“If we’re sitting on the line or just making a part repetitively, God is using us to create that part,” said Asselin, 21, a student at Harmel Academy of the Trades in Grand Rapids, Michigan, who is also apprenticing in machine maintenance and repair at a company that produces fuel injectors.

Asselin, who is completing his first year in a three- to four-year program, finds that he has been able to apply what he is learning about St. Joseph’s life and virtues in the academy’s Catholic teaching-based humanities program to his technical training and job.

“It’s really kind of funny,” said the Holland, Michigan, native. “I never really thought that it would be that in depth, that I would have some things every single day that I would be able to use what I learned from class.”

St. Joseph’s patronage of labor is celebrated on his May 1 feast day, St. Joseph the Worker. Along with his skill as a craftsman and the fact that he literally offered his work to God, as provider for Our Lord and Our Lady, St. Joseph teaches us about the value and dignity of work and many other virtues.

As the Church recognizes the Year of St. Joseph, Harmel Academy and another Kansas-based school are teaching young men the value of work, especially manual labor, while students are also learning about the patron of workers as a model of true masculinity.

Because he never speaks in the Bible, St. Joseph is sometimes overlooked, said Marian Father Don Calloway, Steubenville, Ohio-based vocations director of the Congregation of Marian Fathers of the Immaculate Conception of the Most Blessed Virgin Mary and author of Consecration to St. Joseph. “He’s the greatest saint after Our Lady,” he said. “My hope is that people will pay more attention to him and bring him into their lives and their work environment and seek to model themselves off of him.”

St. Joseph is known as a carpenter, but he actually may have worked with both wood and stone, according to Father Calloway, who added that, whatever he did, he gave glory to God.

“I think when [men] look to St. Joseph, they’re going to see a good man, a virtuous man who is strong. He can swing an ax and carry stones and things like that, he can walk long distances, and yet he’s tender, he’s compassionate, he’s loving — all of those things that men need to see today.”

“We see him very much as a man of action, a man of great competence and skill and a man of incredible strength,” Kerr said. “I don’t think there has been any human who has been given more responsibility and suffered more, except for Our Lady, than St. Joseph.”

St. Joseph loved what he did and responded perfectly to his vocation, Kerr explained. “I bet it was a joy for him to build things, just as it’s a joy for so many people, craftsmen in particular, to build and to create.”

St. Martin’s offers a “Mastery Program,” where students can, in addition to their regular work on a farm that produces some of their food, do extra projects to improve skills in woodworking and other areas.

At St. Martin’s Academy, junior David Meyers, 16, has learned from St. Joseph the diligence needed to live a life of manual labor. “I definitely respect him even more,” said Meyers, who is from Fort Scott.

Before a day of work on the farm, students pray to St. Joseph. And Meyers, who is discerning college, said he thinks about the saint while doing manual work.

“One day we couldn’t get the power tools to work, and we used all hand tools,” he said. “I thought, ‘Wow, this is hard work!’ and I thought about St. Joseph in that moment.”

St. Joseph, the archetype of all Harmel Academy’s efforts, is seen as a “maker,” a resourceful worker who had many skills, said Brian Black, president and co-founder of the academy, which has eight students (in the academy’s first full year). The academy teaches students to understand themselves as dignified workers and to love the gift of being able to co-create with God.

St. Joseph was obedient to whatever God presented him, including sudden and unplanned changes, said Black, adding that the academy has had to do so of late, comparing the saint’s circumstances to the uncertainty of the COVID-19 pandemic and restrictions.

During COVID, Asselin said he has learned how all things are given by God and can be taken away. “We realize that we have to have an open hand when going to God and how St. Joseph had to be openhanded, with moving back and forth from Egypt to Nazareth.”

Although St. Joseph was silent in the Scriptures, he was neither safe nor tame, Kerr said. “He was a very resourceful and competent man who protected his family and maneuvered them very deftly through a very dangerous and difficult situation,” he said. “And that’s part of why we ask for his intercession. … He was a man of tremendous prudence who was able to clearly exercise good judgment.”

The saint is also known as the “Terror of Demons” in the Litany to St. Joseph. “That’s something that inspires young men, and, Lord knows, spiritual warfare is real, and we need St. Joseph on our side,” Kerr said.

As a father, St. Joseph is a model for masculinity who used his strength not to dominate but to serve God and his family, Kerr said. With the family under attack, the Church needs the example of St. Joseph, he emphasized.

“All of our boys are called to be fathers of some sort, whether they’re married and have children of their own or if they enter the religious life,” Kerr said.

A junior at St. Martin’s Academy, Danny Harrington, 18, of Pearl City, Illinois, said he admires “St. Joseph’s example of protecting the vulnerable and especially his family, Mary and Jesus. He’s an important model for all men in today’s world. He makes me want to be well-rounded in all virtues.”

Harrington, who may work in his father’s carpentry business after graduation, attend college or do mission work, said he appreciates St. Joseph’s virtues. “Carpentry and the trades can seem like a small thing,” he said, “but he was such a humble carpenter. It gives me more respect for the trade itself.”

One of St. Joseph’s important roles was passing on to Jesus not only skills, but also customs, manners and religious practices, Father Calloway said.

As a master craftsman, St. Joseph taught Our Lord about the value of work, Black underscored. “Christ would have been an apprentice, which is a really interesting thought to think about: the Lord of the universe being apprenticed to St. Joseph and learning from him.”

St. Peregrine Once Punched Another...