St. Nicholas Owen, a Carpenter Saint for the Year of St. Joseph 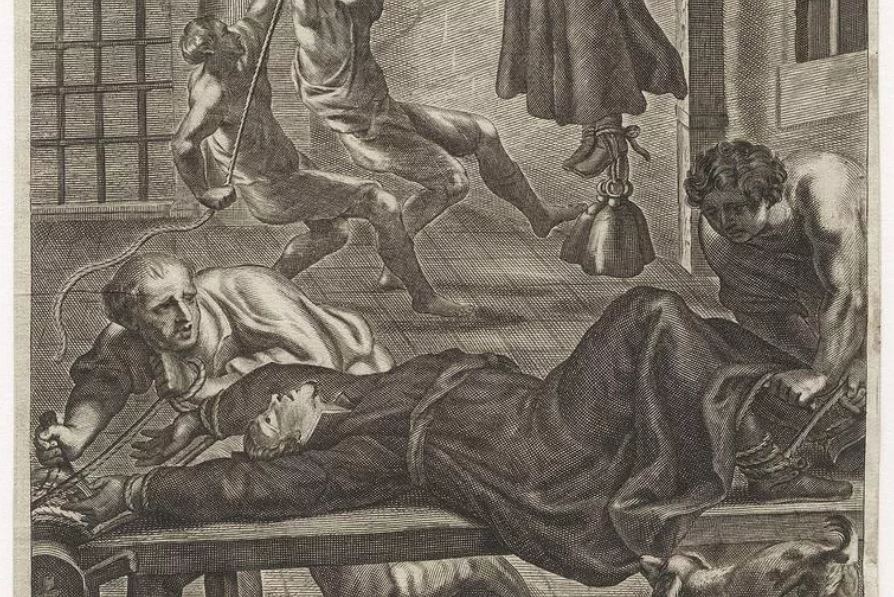 St. Nicholas Owen, a Carpenter Saint for the Year of St. Joseph

COMMENTARY: The English martyr, whose feast day is today, built ‘priest holes’ to protect persecuted clergy in the 16th and 17th centuries.

We think of St. Joseph as a carpenter, teaching the Lord Jesus his trade. In this Year of St. Joseph, we ought to honor another carpenter saint, Nicholas Owen, one of the English Martyrs, killed in 1606. His feast day is today.

St. Nicholas was canonized as one of the Forty Martyrs of England and Wales by St. Paul VI in October 1970. The pandemic put paid to the 50th anniversary celebrations last fall; those commemorations for St. Nicholas Owen and the others may take place this year.

“In the New Testament, the word ‘tekton’ appears, which was the profession of the Lord Jesus before his public ministry,” Pope Benedict XVI said in 2005, addressing the workers who built his library in the Apostolic Palace. “We usually translate the word as ‘carpenter’ because at that time houses were made mainly of wood. But more than a ‘carpenter,’ he was an ‘artisan’ who must have been able to do all that was required in building a house.”

St. Nicholas built “houses” for priests hiding from the fierce anti-Catholic persecution in 16th-  and 17th-century England. Some of those “houses” were just a few feet tall and wide. These were the famous “priest holes,” built in the homes of Catholic families to hide the clandestine priest who would periodically visit to offer the Holy Mass and administer the sacraments.

Nicholas Owen was the master craftsman of priest holes. Agents would search the house, convinced that a priest was present, seeking to arrest him so that he could be tried and executed for exercising his priestly ministry. They would search high and low, but so well-designed were the priest holes that the man hiding inside would often not be found, remaining safe — if cramped and anxious — in the floor, or in the wall, or under the foundation.

“Perhaps no single person contributed more to the preservation of the Catholic religion in England during the penal times than a humble artisan called Nicholas Owen, who in the reign of James I saved the lives of many priests by his extraordinary skill in devising hiding places for them.” So reads the opening lines of his entry in Butler’s Lives of the Saints.

In 1580, he had been secretly admitted to the Jesuits as a lay brother, after years of serving the clandestine Jesuit priests Henry Garnet and John Gerard. He had helped them and others remain hidden.

He would receive the Eucharist before building a hiding place and would work alone, so that no one else would know where it was or how it worked. He prayed constantly during the work and offered the miniature “rectories” to God upon completion, accepting no other compensation for his work.

There is something of the thriller in the life of St. Nicholas, staying one step — sometimes just a quarter step — ahead of the royal agents hunting him down.

In 1594, he was caught and imprisoned in the Tower of London with Father John Gerard. He was tortured but did not give up any information. So important was he to the Catholic resistance — more so than even the priests, as without Nicholas they may not have been able to function — that a wealthy Catholic man paid for his release. So courageous and ingenious was Nicholas that he returned to the Tower and masterminded Father Gerard’s escape!

St. Nicholas continued his perilous priest hole project. In the Roman Martyrology, which is extremely brief in what it lists about saints, his entry includes his carpentry work: latebras pro sacerdotibus condendis extruxit — he built hiding places for priests.

In 1606, Nicholas himself was in hiding when agents were searching for him and two priests. He finally came out of hiding and gave himself up, hoping that the authorities would abandon the search and not find the others.

He was returned to the Tower of London and subjected to horrific torture, being suspended in the air for hours at a time over several days. Eventually the torture opened wounds that led to a slow and excruciating death.

St. Joseph was given the mission of employing his talents and trade as guardian of the redeemer, the incarnate Christ, against the lethal wickedness of the king. St. Nicholas had a similar mission, to creatively use the tools of his trade to protect those who act in persona Christi, who bring the presence of Christ in the Eucharist, against the lethal wickedness of another king.

St. Nicholas Owen is fitting saint to celebrate in the Year of St. Joseph, 50 years after his canonization.

UK Government May Push to Legislat...