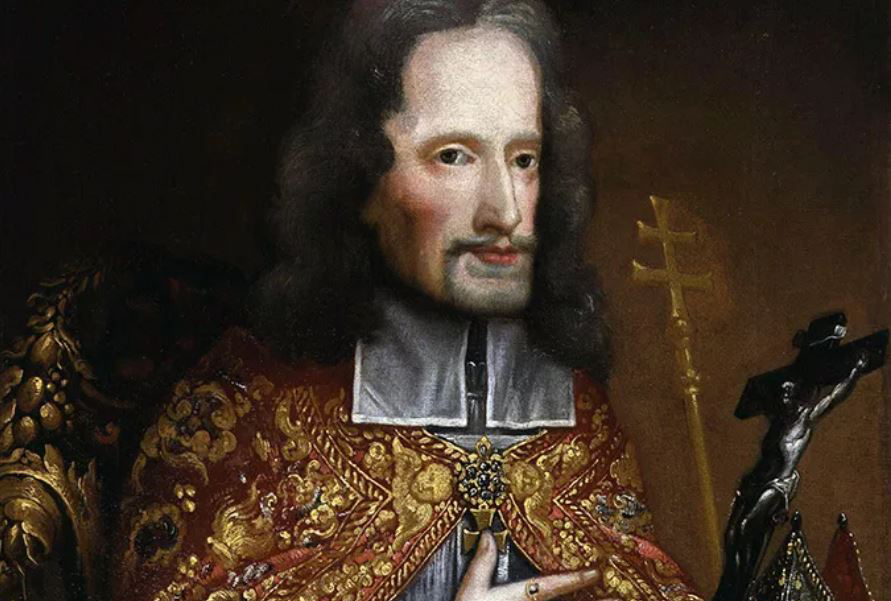 On July 1, 1681, St. Oliver Plunkett suffered and died at Tyburn. He forgave his persecutors, asked forgiveness for his own sins, made an Act of Contrition, prayed the Miserere, and commended his spirit to God.

When the United States Conference of Catholic Bishops launched the annual Fortnight for Freedom in 2012, they knew that several martyrs’ feasts or memorials were on the calendar from June 21 to July 4. Sts. John Fisher and Thomas, Sts. Peter and Paul, and The First Martyrs of the Holy Roman Church—even St. John the Baptist, although we celebrated his Nativity on June 24. What they might not have realized was how many English Catholic martyrs suffered during that period during the sixteenth and seventeenth centuries:

These martyrs suffered during the reign of Elizabeth I and under the Stuarts, found guilty of being priests in England (an act of treason) or of being a layman who assisted a priest in England (a felony).

An Irish martyr died on July 1 at Tyburn Tree in London. He was the last Catholic priest to be hanged, drawn, and quartered there; he was the last victim of the Popish Plot’s anti-Catholic, anti-Jesuit hysteria to be executed, but he was not a Jesuit, nor an English priest. St. Oliver Plunkett was the Archbishop of Armagh, the Primate of Ireland. He was tried twice by the English authorities: once in Ireland where the jury wouldn’t find him guilty and again in England, where they couldn’t wait to find him guilty.

The Primate of Ireland

Oliver Plunkett was born on All Saints Day in 1625 to a well-to-do Catholic family in County Meath, Ireland. He studied for the priesthood in Rome but did not return to Ireland when he was ordained in 1654 because the Church was being persecuted after Oliver Cromwell’s defeat of the Irish uprising after the English Civil War. Father Plunkett remained in Rome and taught Theology at the college of the Propaganda Fide; in 1669 he was appointed the Archbishop of Armagh and arrived in Ireland the next year.

As Archbishop he was able to revive the Church under the tolerant leniency of the English Lord Lieutenant of Ireland. He reformed the clergy, confirmed thousands of Catholics, built a Catholic college in Drogheda (which admitted Protestants), and served the Church with zeal. Then the Test Acts were passed by Parliament in England in 1673 and the short period of leniency was over in Ireland. James, the Duke of York had converted to Catholicism; he was his brother Charles II’s heir (Charles had many illegitimate sons by several mistresses but no surviving children from his Catholic wife, Catherine of Braganza). Archbishop Plunkett went into hiding and continued to serve his flock.

The Popish Plot and Ireland

Titus Oates—voted in 2005 the worst Englishman of the seventeenth century by BBC History Magazine—was a former Anglican minister of ill repute who went to St. Omers in Artois, France to study with the Jesuits for the Catholic priesthood. He represented himself as a devout convert and for awhile was accepted by the Society of Jesus; when they found out that he was not what he said he was, they expelled him.

Perhaps it was pique at being rejected; perhaps Oates planned this from the beginning, but when he returned to England in 1678, he began to tell authorities about a great Jesuit conspiracy to assassinate King Charles II and place James, his Catholic heir, on the throne. Oates named Jesuits he had met at St. Omer; he named lay Catholics who served the households of Catherine of Braganza and Mary of Modena, the Catholic Duchess of York; he claimed the king’s wife was in on the plot; no Catholic in England was safe from accusation. For example, St. Claude de la Colombière, SJ, the confessor of St. Margaret Mary Alacoque, serving as chaplain to Mary of Modena, was arrested and held in prison for several months until exiled to France in 1680. His health broken, he died two years later on February 15, 1682.

Charles II never believed in the plot after interviewing Titus Oates, but the loyal opposition in Parliament, seeing an opportunity to exclude the Duke of York from the succession, pursued the investigation zealously. Oates and other so-called witnesses continued to lie and nine Jesuits and two laymen suffered martyrdom. Other priests, like St. John Kemble, who had served Catholics faithfully and quietly for years, were arrested, accused of conspiracy, and executed for their priesthood because nothing could be proved of their involvement in the Popish Plot. Five Catholic members of the House of Lords were charged: Blessed William Howard, the grandson of St. Philip Howard, was beheaded.

There was no plot; Oates and his confederates made everything up. Samuel Pepys, the great diarist, was arrested merely because he had worked with French officials in his job as administrator of the Royal Navy. Accused of being a secret Catholic, he struggled to prove himself innocent, because English justice assumed him guilty.

The Catholic accused, especially the Jesuits, never received fair trials because their witnesses were suspected of perjury approved by the Pope.

In such an extremely anti-Catholic atmosphere, almost anything would be believed of Catholics, including of the Archbishop of Armagh, who was arrested on St. Nicholas Day (December 6) in 1679 and held in Dublin Castle. Archbishop Plunkett was accused of conspiring with the French to invade Ireland. His first trial in Dublin fell through so he was brought to England, incarcerated in Newgate Prison, and awaited a second trial, charged with treason in court on May 3, 1681.

Guilty of Treason; Guilty of Being a Catholic

Ireland and England are separated by the Irish Sea; Armagh is about 450 miles from London—in the seventeenth century those were huge distances, and bad weather could delay any crossing and bad roads could delay travelers on the overland routes. Archbishop Plunkett’s witnesses could not arrive in time for his trial on June 8, 1681. He was allowed no counsel in his defense and the outcome of the trial was predetermined. Plunkett was found guilty of treason by a jury that deliberated for 15 minutes on June 15. Sir Francis Pemberton, the Lord Chief Justice, told him, “You have done as much as you could to dishonour God in this case; for the bottom of your treason was your setting up your false religion, than which there is not anything more displeasing to God, or more pernicious to mankind in the world” as he sentenced Plunkett to being hanged, drawn, and quartered. The martyr replied, “Deo Gratias”.

On July 1, 1681, St. Oliver Plunkett suffered and died at Tyburn. He forgave his persecutors, asked forgiveness for his own sins, made an Act of Contrition, prayed the Miserere, and commended his spirit to God. He was buried in the Anglican church of St. Giles-in-the-Fields with five other Popish Plot martyrs; his body would later be exhumed (his head is venerated in St. Peter’s Church in Drogheda and most of his remains are in Downside Abbey church in Somerset, England) .

After his martyrdom the lies of the Popish Plot became obvious even to bigoted English judges. When he became king in 1685 James II charged Titus Oates with perjury. Oates was released from prison after the Glorious Revolution of 1688 and he died in 1705, forgotten and obscure.

Pope Benedict XV beatified him in 1920; Pope Paul VI canonized him, the first of the Irish martyrs of the English Reformation era and its aftermath, in 1975. In 1997 the Catholic Church in Ireland established a national prayer campaign invoking St. Oliver Plunkett for Peace and Reconciliation. St. Oliver Plunkett, pray for us!

US Army Chaplain’s Cause for Canon...

Takin’ Him to the Streets