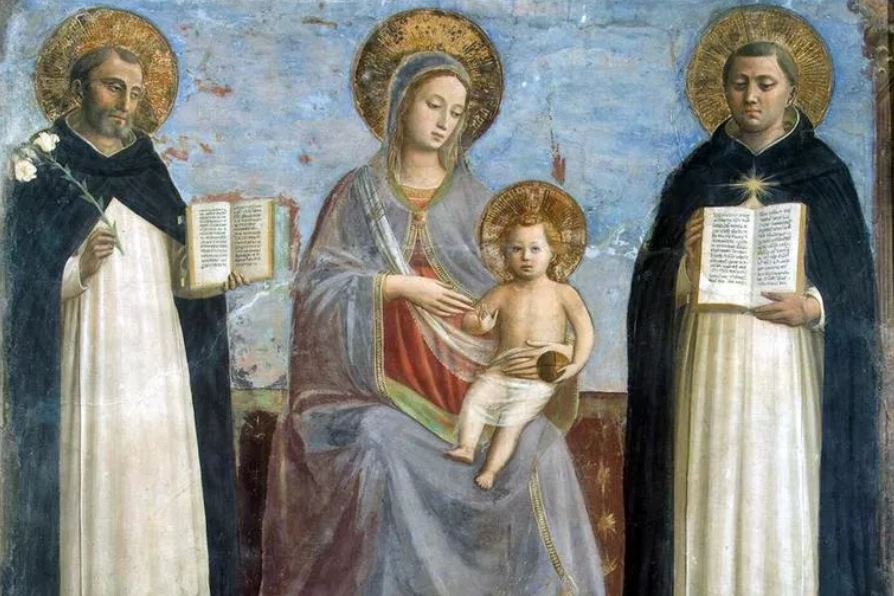 We call Brother Thomas ‘the dumb ox,’” said St. Albert the Great, “but I tell you that he will yet make his bellowing heard to the uttermost parts of the earth.”

St. Thomas Aquinas was born in the castle of Rocca Secca, southeast of Rome, about the year 1225. At the age of 5, Thomas became an oblate in the nearby Benedictine Abbey of Monte Cassino, where he remained until age 13. About 1239, he was sent to the University of Naples, where he joined the Dominican Order at age 19.

His family objected to his decision, preferring he join the Benedictines. At the order of his mother, Theodora, his brothers, soldiers in the emperor’s army, captured Thomas and imprisoned him in the castle of Monte San Giovanni. The future saint spent his time in prayer and study. In an attempt to break Thomas’ resistance, his brothers sent a prostitute into his room to seduce him. Thomas immediately seized a hot poker from the fireplace and chased her away.

Thomas’ family finally relented, and he returned to the Dominicans. He began his studies under the renowned St. Albert the Great. While many of his classmates were eager for debate, Thomas, in his humility, was often silent, which, combined with his large girth, earned him the nickname “the dumb Sicilian ox.” One day, however, St. Albert realized the brilliance of Thomas and declared, “We call Brother Thomas ‘the dumb ox,’ but I tell you that he will yet make his bellowing heard to the uttermost parts of the earth.”

Yet Thomas’ learning was surpassed by his holiness. One of Thomas’ friends observed, “When consecrating at Mass, he would be overcome by such intensity of devotion as to be dissolved in tears, utterly absorbed in its mysteries and nourished with its fruits.”

Thomas taught in Paris and wrote extensively, including his well-known Summa contra Gentiles. From 1259-68 he preached in Italy, where he began the most famous of his works, Summa Theologiae, a presentation and defense of the Catholic faith. Although Thomas devoted five years of his life to writing the Summa, after he received a vision in 1272 he left the work incomplete, declaring, “The end of my labors is come. All that I have written appears to be as so much straw after the things that have been revealed to me.” Two centuries later, his Summa was one of three reference works used at the Council of Trent (the others being the bible and the papal decrees) and would profoundly impact the teaching of the Catholic faith for centuries to come.

While much of Thomas’ works dealt with philosophy and theology, he was also commissioned by Pope Urban IV to compose the liturgical office and Mass for the feast of Corpus Christi. This produced two hymns well-known to many Catholics today, the O Salutaris and Tantum Ergo, sung at Benediction of the Blessed Sacrament.

Thomas Aquinas died in 1274, just before his 50th birthday. He was canonized in 1323. Pope St. Pius V declared him a Doctor of the Church. In 1880, Pope Leo XIII declared him patron of all universities, colleges and schools. He is remembered in the liturgy on Jan. 28.