Stand Fast on the Pronouns 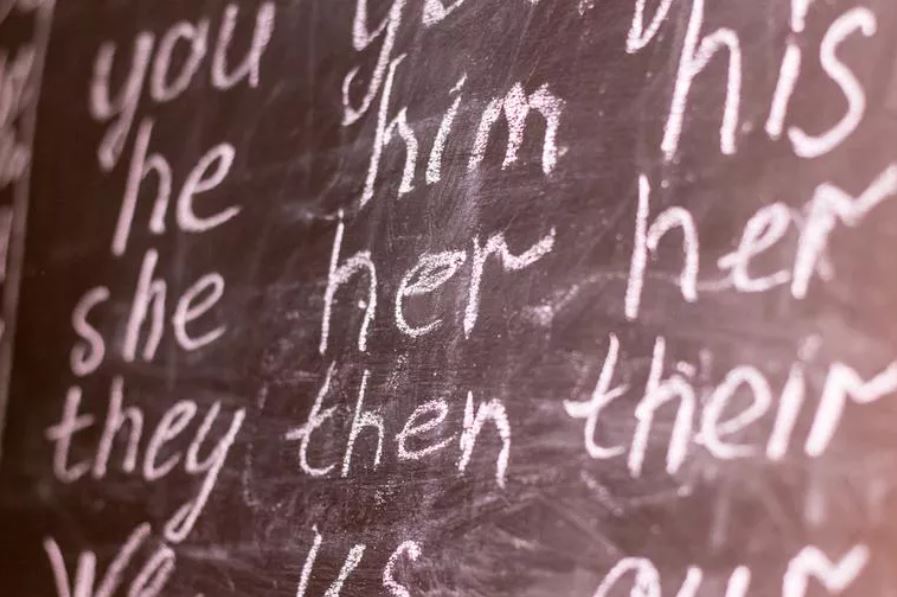 Stand Fast on the Pronouns

There may still be ways for Catholics to avoid the worst repercussions of 21st-century doublethink. (photo: Kryvosheia Yurii / Shutterstock)

COMMENTARY: We should object to compulsory pronoun changes because deliberately telling an untruth strikes at our very integrity as human beings.

In George Orwell’s dystopian novel Nineteen Eighty-Four, the protagonist Winston Smith is being interrogated by Inner Party member O’Brien, who holds up four fingers and asks, “How many fingers am I holding up, Winston?” “Four,” Winston responds. O’Brien asks, “And if the Party says that it is not four but five — how many then?” “Four,” Winston again responds.

Recently I had three conversations with Catholics who are being pressured to consent to propositions as transparently false as those of Orwell’s doublethink. One conversation was with an Army officer whose fellow officer has announced that he is actually a woman. Every soldier in the battalion must, under military obedience, comply with this individual’s demand to be addressed with feminine pronouns.

The second conversation was with a student preparing to start college this fall. The university has sent out an email requesting everyone’s “preferred pronouns” and ominously reminded new students that the use of these pronouns will be compulsory.

The third conversation was with someone at a private firm. He has a wife and children and depends upon his job to support them. A male colleague has just announced to everyone that, all appearances to the contrary, he is in fact a woman. Everyone in the firm has been informed, in no uncertain terms, that their continued employment depends upon complying with this individual’s demand to be addressed as such.

Some would say that there is no reason to object. Live and let live. If a man wishes to be called “she/her” or vice-versa, then so be it. Why make a scene? Why rock the boat?

For one reason: because we do not believe it to be true. Calling a man a woman is quite simply a falsehood. We should object to compulsory pronoun changes because deliberately telling an untruth strikes at our very integrity as human beings.

Furthermore, if truth and meaning are defined by the individual, not by objective evidence, then only power can resolve the difference. When social or financial or political pressure is brought to bear, forcing us to use alternative pronouns, we have begun our descent into a world where might makes right. It is honestly not a great leap from the dystopia of Orwell’s novel. That may not be the intention of most of those struggling with gender dysphoria, but that is the inevitable upshot of these strong-arm tactics.

Proper names identify individuals. John, Mary, James, and Nancy refer to specific human beings. Nouns and pronouns, by contrast, identify something about reality. They are metaphysical statements. If we both see an animal in the distance and you think it is a pony and I think it is a foal, we cannot both be right. We can discover the truth of the matter, however, by investigating the objective facts. Simply telling me to submit to your statement is not enough. Forcing me to do so is unjust and abusive.

A colleague at work has a right to believe himself a different gender; but I have a right to believe that such a thing is not true. It is not that I begrudge his choice; it is that I believe it not possible. People who feel that their gender is at variance from their biological sex may mean no harm and consider preferred pronouns a simple matter of respect. They, like all human beings, should indeed be respected and treated with the dignity which is theirs. But demands for respect that force others to deny their own perception of reality lose their legitimacy.

Compromising on the use of pronouns, then, is an offense against the truth. It is also an offense against charity. Catholics are accused of being intolerant, transphobic, and hateful. The opposite, however, is the case. We have nothing but love for our brothers and sisters suffering with gender dysphoria.

In my work as a priest I have worked with people who feel intensely that they are mismatched with their own bodies. It is a terrible, agonizing and often hidden form of suffering. We owe them our compassion and our love. For that very reason, we cannot deny them the truth. A psychologist who encourages and celebrates the unhealthy body image of a patient suffering with anorexia is rightly charged with malpractice. People with anorexia have a right to the truth about their own bodies so that they can begin healing, even if the truth is at first not welcome. Do those with gender dysphoria deserve any less?

Some will say that the comparison of these situations to Nineteen Eighty-Four is an exaggeration, mere grandstanding to make a point. But consider: The Army officer is in real danger, as we speak, of disobeying orders and being discharged. The new college student could face academic discipline and expulsion for failing to comply. The employee could lose his job and no longer be able to support his family. It isn’t, admittedly, electric torture. But it isn’t nothing.

Many of those who struggle with gender dysphoria do not endorse these aggressively coercive tactics. But enough of the media and intellectual elite, a small group of powerful bullies, will stop at nothing to achieve compliance.

There may still be ways for Catholics to avoid the worst repercussions of 21st-century doublethink. My Army friend has extracted a reluctant agreement from his commander that he can refer to his fellow officer by rank rather than pronoun. It is an awkward solution, but so far feasible. Someone in a professional or academic environment may be able to use someone’s proper name (repeatedly) rather than pronouns. There are undoubtedly other creative solutions that do not compromise anyone’s deeply held beliefs. The walls seem to be closing in, however, and the time may come when we will simply need to pay the price for telling the truth.

Speaking at the opening of the Pauline Year in 2008, Pope Benedict XVI observed, “In a world in which lying is powerful, truth is paid for with suffering.” As a Catholic priest, it is unlikely that I will have to pay much of a price for referring to people by their actual genders. I am painfully aware that it is our lay faithful, not we priests, who will pay much of the price for telling the truth today. Yet we Catholics cannot surrender our hold on reality. We cannot collude in untruths, especially those which might drive people even deeper into a false, and often destructive, perception of their own bodies.

Visiting East Berlin in 1983, a friend of mine gazed at graffiti scrawled on the Berlin Wall. It simply read “1+1=2”. In the face of Communist lies, it was a strong political statement. It insisted that the truth must be told no matter what the pressure of the ruling class. In that tyrannical regime, telling the truth was an act of rebellion. The time has come for us to do the same.

Scott Hahn’s Son to be Ordained a...

Meet the Mother Challenging the UK...