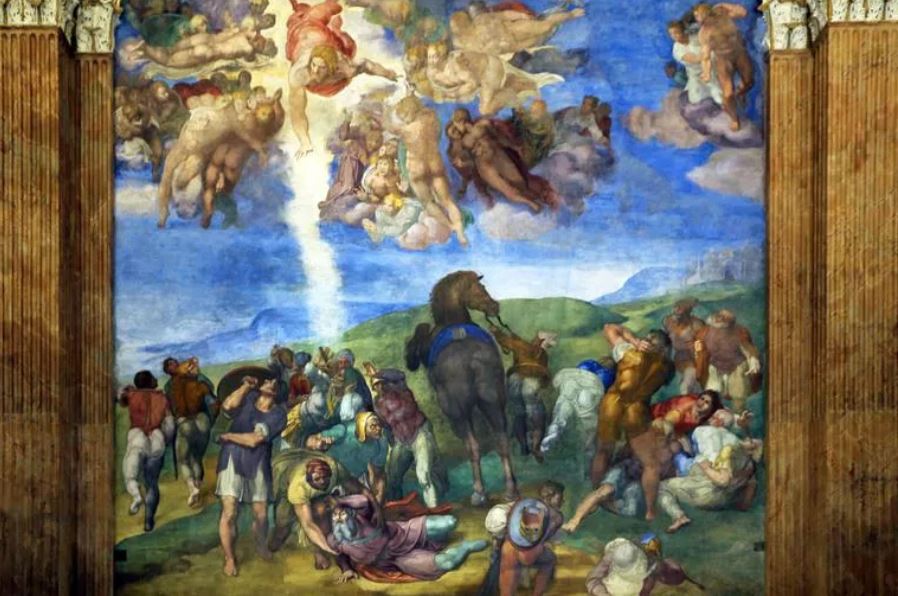 When Saul of Tarsus got knocked off his high horse, the world would never be the same.

If anybody wonders how much Christianity has shaped our culture, just consider the phrase about “being knocked off your high horse.”  It means that somebody who was acting haughtily, among the high and mighty, found himself dethroned from that position.

One source suggests that the phrase dates, at least in English, from the late 14th century, when powerful medieval figures accentuated their importance by riding dominating steeds.

Let me suggest that the original guy to get knocked off his high horse was Saul of Tarsus, St. Paul.

Now neither account explicitly mentions a horse.  Both accounts speak of a blinding light that surround Saul and his men who are en route to Damascus, passionately intent on arresting and carrying off any heretical Jews who might be following “the Way” of Jesus of Nazareth.  The light causes them to “fall to the ground” and it is then that Saul hears Christ’s voice.  The rest is Christian history.

Most Christian artists who chose to tackle this scene, however, have chosen to include a horse, usually bucking who dethrones his rider.  There’s a certain human schadenfreude to seeing “the bigger they are, the harder they fall.”

Likewise, “pride goeth before a fall,” and Saul’s pride as dispatched representative of Jerusalem to ensure the purity of Damascene Judaism must have been great.  But while pride might precipitate a fall, the important thing is what happens next: is pride left on the ground, or picked up and carried on?

Saul was passionate.  He was a Jew’s Jew, intent on hewing to the Old Testament Law fervently and precisely.  He intended to keep Judaism free of foreign and heretical accretions.

Christianity, born in a Jewish cradle, was one such heresy and Saul intended to wipe it out.  He had already demonstrated his complicity in those efforts by serving as the coat-and-cloak-check guy during the murder of St. Stephen, the first martyr (Acts 7:58b).  So that there’s no doubt about Saul being some innocent bystander Luke (the author of Acts) makes it clear: “And Saul approved of their killing him” (8:1).

So, when Saul obtained authorization to go to Damascus to ferret out Christians in that community, he very much intended to make them an offer they couldn’t refuse: to arrest them and return them to Jerusalem for punishment.

It’s on his journey for that purpose that Saul gets knocked off his high horse by Christ, who simply asks, “Why are you persecuting Me?”

That encounter turns Saul’s life around, and also tells us a lot about the sincerity of Saul’s religious convictions.  He does not cling to his own convictions about “the Way.”  Rather, Saul is always open enough to God to let God’s grace guide and change him, even if the change is 180 degrees.

Michelangelo’s “Conversion of Saul,” dating from around 1542-45, captures that moment.

I chose this fresco because it depicts the whole story.  It’s not just a depiction of what the earthly eye might have seen, what a camera might have captured if one existed back then.  By depicting the road to Damascus at the bottom of the work and heaven at the top, both essential protagonists appear in it: Saul and Jesus.

No conversion can occur, after all, without Christ.  But even Christ cannot force the free will of the one called.  One should say “yes.”  But one might say “no.”

Saul lies on the ground, blinded.  Acts tells us that Saul’s entourage saw the great light, but did not hear Christ’s voice (Acts 9:7).  They were otherwise speechless.  The faces in Michelangelo’s work seem to capture that: they are confused, they look around, one man even protects his face with his shield, as if to keep out the light (and maybe keep away God?).  Otherwise, the traveling party seems preoccupied with helping up the leader of their pack and/or protecting him and themselves from the bolting stead.

The horse also provides a visual line that links Saul to Christ.

Jesus appears with power in the heavens.  He is not alone: like Michelangelo’s “Last Judgment,” the heavenly court is witness to this life-changing moment.  From the hand of the powerful and virile Christ a column of light descends towards Saul, petering out in the blindness of him and his men.  Petering out but — like God’s Word — not failing to accomplish its end.  That column of light also serves to connect heaven to earth.

Curiously, Saul is depicted as an old man.  We should perhaps view that detail theologically, because we know from Acts that, when he safeguarded the cloaks of Stephen’s assassins, he was “a young man” (7:58).

It’s not that many years ensued.  No, this moment on the road to Damascus is the radical moment of change in Saul’s life.  Later, in his epistles, Paul will speak about the necessity of the old man dying to sin.  The old man must be crucified with Christ (Romans 6:6, 11).  But encounter with the Death and Resurrection of Christ is rebirth: Baptism is participation in the death of Christ in the hope of resurrection (Romans 6:3-8; see also 2 Timothy 2:11).  After his men lead Saul to Damascus, he was baptized (Acts 9:18).

(Wikipedia, of course, suggests that the face of Saul is also the face of Michelangelo, about 65 when this fresco was made).

As is typical with Michelangelo, both dynamic action and anatomical precision are valued.  Even though the earthly figures have stopped on the road, the tension of movement and happening suffuses this work.  Good Renaissance painter that he is, Saul’s entourage also looks a bit like people of Michelangelo’s day.

The work is in the Vatican’s Pauline Chapel.

How St. Irenaeus helped save the e...