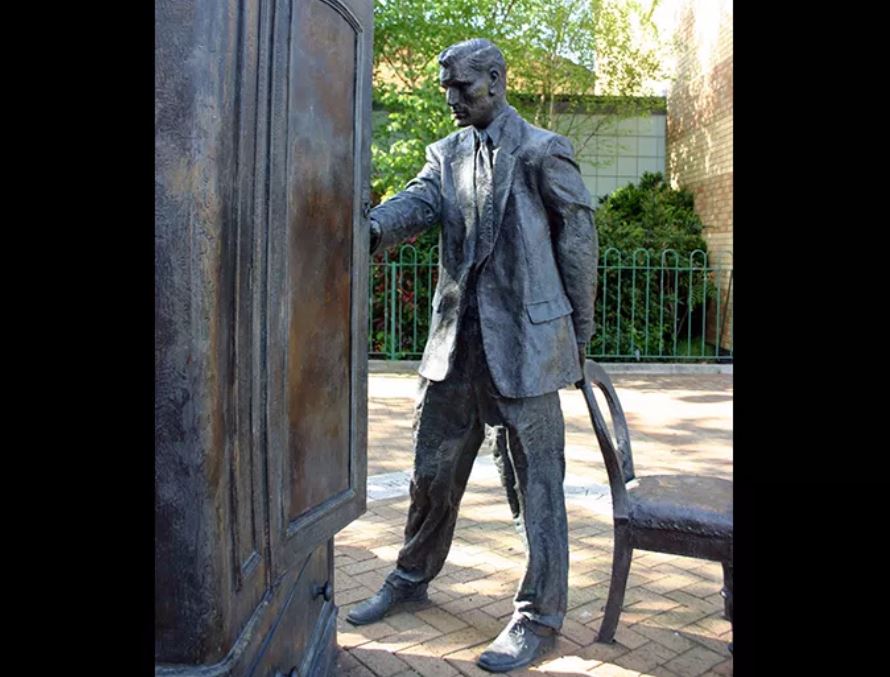 Despite Lewis’ prominence in Christian apologetics, he was not always a follower of Christ

“Men must endure their going hence.” So warns Edgar in Shakespeare’s King Lear.

And so says the tombstone shared by illustrious Christian apologist Clive Staples Lewis and his brother Warren. The tombstone, located in the yard of Holy Trinity Church in Headington Quarry, Oxford, commemorates the writer C.S. “Jack” Lewis, who died more than 57 years ago on Nov. 22, 1963, and his quieter older brother, who died in April 1973.

Lewis was one of the intellectual giants of the 20th century, contributing a wealth of literature ranging from children’s literature and fantasy (most popular being The Lion, the Witch and the Wardrobe and others in the Chronicles of Narniaseries), to literary criticism and popular theology. During World War II, his reflections on the BBC Radio broadcast — later republished as Mere Christianity — made the case for Christianity through the use of logic.

Despite Lewis’ prominence in Christian apologetics, he was not always a follower of Christ; during his university years, he was an avowed atheist. At Oxford, he often debated philosophy and religion with several Christian friends including J.R.R. Tolkien (best known for The Lord of the Rings trilogy). And those friends were persuasive! “Really, a young Atheist cannot guard his faith too carefully,” Lewis confided in his conversion story, Surprised by Joy. “Dangers lie in wait for him on every side.”

Lewis wrote poignantly in Surprised by Joy about his first steps toward faith, toward confirming the existence of God:

“You must picture me alone in that room at Magdalen, night after night, feeling, whenever my mind lifted even for a second from my work, the steady, unrelenting approach of Him whom I so earnestly desired not to meet. That which I greatly feared had at last come upon me. In the Trinity Term of 1929 I gave in, and admitted that God was God, and knelt and prayed: perhaps, that night, the most dejected and reluctant convert in all of England.”

So Lewis embraced Christianity, albeit reluctantly. But was Jesus real? His interest piqued by the faith of friends who seemed too pragmatic to fall for a myth, Lewis read the Gospels — and he was amazed to find them believable. The writers, he thought, were too unimaginative to have made the whole thing up; they seemed to truly believe the accounts of Jesus’ ministry, death and Resurrection.

Perhaps Lewis’ best known application of Aristotelian logic is his “Liar, Lunatic or Lord” syllogism. Evaluating Jesus’ claims to be God, Lewis points to three possible explanations: either he really was God, he was deliberately lying, or he was not God but thought himself to be (in other words, he was delusional or insane). Nothing in the Gospel, according to Lewis, suggests that Jesus was not a person of truth; nor did he appear mentally impaired. The only logical answer, then, was that Jesus is truly what he said he was: He is God.

On Sept. 19, 1931, Jack Lewis engaged his friends Hugo Dyson and J.R.R. Tolkien in a discussion of myth. The trio walked and talked all night: Tolkien explaining how myths were God’s way of preparing the ground for the Christian story, and Dyson showing how Christianity worked for the believer, liberating him from sin and helping him to become a better person. Lewis’ stubborn arguments for atheism were demolished.

It took days of ruminating and meditating for Lewis’ conversion to be complete. Lewis himself explained that on Nov. 12, he and his brother Warren traveled by motorcycle to Whipsnade Zoo. “When we set out,” Lewis wrote, “I did not believe that Jesus Christ is the Son of God; and when we reached the zoo, I did.”

Lewis’ book The Pilgrim’s Regress tells the story of his dramatic conversion in allegorical form.

Restored for the Carpenter: St. Jo...