The Crazy, True Story of How the Church Helped Take Down the Klan in Colorado 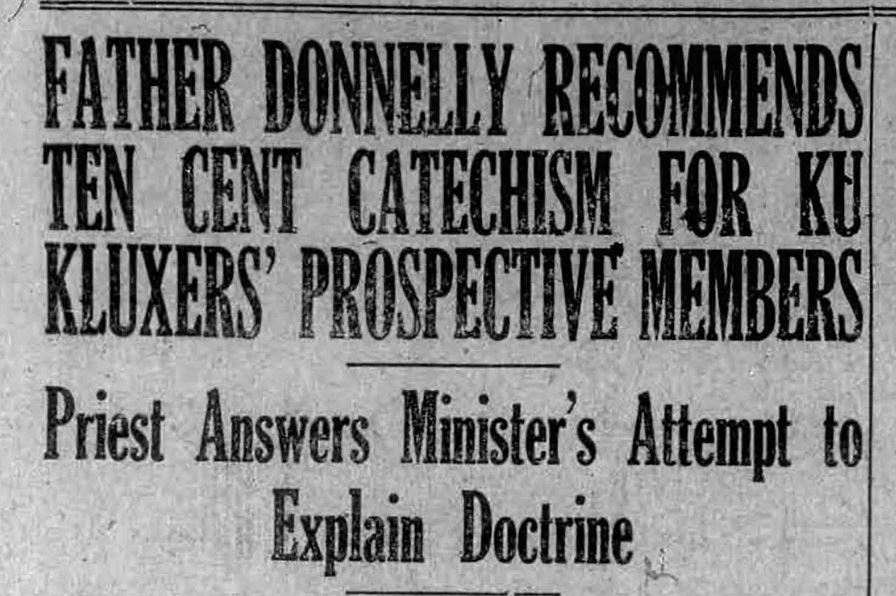 The Crazy, True Story of How the Church Helped Take Down the Klan in Colorado

The Klan was so entrenched in Colorado that it was impossible to be elected to political office, or gain a leadership position in the city’s institutions, without the backing of the Klan.

Editor’s Note: This article was first published by the Denver Catholic and is reprinted with permission.

DENVER, Colo. — With the recent publication of Colorado’s historic Ku Klux Klan membership ledgers, which were made public for the first time earlier this week and published by History Colorado online in their entirety, now is a good time to remember how the Catholic Church in Colorado – and the Denver Catholic Register in particular – played a critical role in exposing local Klan members in the 1920s and ultimately helped to dismantle the organization in Colorado.

This important chapter in the history of the Church in Colorado was recognized in 2017 by the Colorado Experience series on Rocky Mountain PBS, when the video series explored the role of the Denver Catholic Register in exposing and ultimately defeating the Colorado chapter of the Ku Klux Klan in the mid-1920s.

The modern narrative of the Klan tends to emphasize its activity in the deep south during the civil rights movement of the 1960s, but Colorado, believe it or not, had the second largest chapter of the Klan in the United States in the 1920s, second only to its birthplace in Indiana.

The Klan was so entrenched in Colorado that it was impossible to be elected to political office, or gain a leadership position in the city’s institutions, without the backing of the Klan. It’s estimated that at its height, the Klan in “Kolorado” boasted a membership of about 35,000 to 40,000 members.

Businessmen, to show their support, and also worried about being targets of powerful Klan boycotts aimed at non-Klan members, would rename their companies in such a way that it was impossible not to know they were members or friends of the Klan, such as the Kanon Koal Kompany, of Canon City, Colorado.

We know that the Klan was racist. What isn’t often mentioned is that the Klan also targeted Catholics, whom they considered to be anti-American.

Gano E. Senter, a politician and owner of a restaurant named Kool Kosy Kafe, sold Cyana cigars which stood for: Catholics, You Are Not Americans. He was the regional director of the Klan, while his wife Lorena headed up the woman’s auxiliary, whose main issue was to ensure that innocent white children were kept out of Catholic orphanages.

The PBS documentary rightly named the Denver Catholic Register, and its then-editor Father Matthew Smith (later Msgr. Smith), as one of the main players who “made an intense effort to expose the inner workings of the Klan,” and who “kept fighting the Klan, constantly.” For his efforts, he was, at least six times, nearly run over in the streets.

The Register featured a steady stream of stories about the Klan during 1924-25, the peak years of control of the Klan in Colorado. Many were national stories that the paper followed closely, such as the Klan’s efforts to push the national expansion of Oregon’s anti-private school legislation, which was ultimately deemed unconstitutional. Klan members proposed similar laws, which would make it illegal for parents to send their children to anything but a public school, in Washington State and Michigan.

One of the first mentions of the Klan came Jan. 3, 1924, when the Denver Catholic Register published a front page story with the headline: “Father Donnelly Recommends Ten Cent Catechism for Ku Kluxers Prospective Members.”

The paper reported that a Protestant minister attempted to explain the doctrine of the Immaculate Conception in the Denver Express, a Ku Klux Klan newspaper. Father J.J. Donnelly, pastor of St. Francis de Sales, found the explanation “amusing, offensive, saddening!” He suggested that if the Klan really wanted to know what Catholics believe, then they should buy a Baltimore Catechism adding, “It costs only 10 cents.”

The Catholic newspaper was an early target of the Klan’s bullying. A short notice in the April 3, 1924 paper noted that the Klan had been calling local businesses telling them not to advertise in the Denver Catholic Register. “One of the largest advertisers of the Register told the KKK phoner to go—well, where we don’t want to spend eternity,” the paper reported in its characteristic tongue-in-cheek style.

The boycott backfired, so another plan was hatched. In June of that same year, a group put together a list of 800 Catholic businessmen and printed at the bottom of the list: “Do not patronize heretics,” and “Only trade with Roman Catholics.” The problem, according to the story in the June 19 issue of the Register, is that Catholics normally didn’t refer to themselves as Roman Catholics, and they don’t refer to their Protestant brothers and sisters as “heretics.” Whoever put the list together, the paper suggested, wasn’t even Catholic. So, who wrote the list?

The Register doesn’t say, as the issue was still under investigation, but it did end the article with this thinly veiled accusation: “The local Klan has been under investigation from Atlanta headquarters. The money-grabbers are decidedly worried over the clownish position and the constant slipping that have characterized His Majesty’s efforts in this section” (a reference to Dr. John Galen Locke, the Grand Dragon of the “Colorado Realm”).

In an article published in the Feb. 5, 1948, edition of the Register, Msgr. Smith revealed that years after the Klan had folded, he was told by former Klan leadership that his information on the inner workings of the Klan was surprisingly on target. They asked him how many spies he had embedded in the organization. He never had a spy, he wrote – just good sources.

In 1925, the Register covered the proliferation of “fakers” who pretended to be ex-priests or ex-nuns and who would speak as “experts” at Klan events about the Catholic Church and the depravity of its priests. The worst offender was “Sister Angel,” who said she was a Franciscan nun in Massachusetts for a year in her 20s. She was 58 at the time. Her talk was deemed by the Denver Catholic Register as the “lewdest lecture ever given in the history of Denver.” The paper refrained from going into detail, for fear of being sent to jail for publishing obscenities.

The most high-profile story covered by the Denver Catholic Register was the campaign launched by Klan-backed Governor Clarence Morley to ban sacramental wine, which he announced in his inaugural address in 1925. The total ban would essentially prevent the celebration of Mass in the state of Colorado, or at least the legal celebration of Mass (priests would have found a way to continue offering the sacraments).

A strongly-worded editorial in the May 1, 1924 edition of the Register asserted that “wine in itself is not evil,” and furthermore, the 2,000-year old Catholic Church “does not need half-baked theologians and newspaper writers to teach her morality.”

The stories of Father Smith on the topic gained national attention and sparked an outcry that was heard all the way to Washington, D.C. The paper’s unwavering stand was expressed in a rallying cry dated Jan. 29, 1925: “We stand ready, if needs be, to die or to rot in jail.” The measure was ultimately defeated, and it marked the beginning of the end for the Klan in Colorado. They had reached too far.

The greatest contribution offered by Father Smith was his guidance to Catholics on how to respond to such a real and tangible threat to the very existence of the Church. At stake was the Church’s ability to educate its children in Catholic schools, and celebrate Mass. These were not small issues.

His advice was to not react, especially not with violence, to remain vigilant in exposing the Klan for what it was, and to be patient.

“Such a movement cannot last,” he wrote in an Aug. 14, 1924, article meant to console Catholics following the re-election of Mayor Ben Stapleton, at the time a Klansmen (he later turned on the Klan).

“Founded on hate, which is naturally repulsive to the human heart; built on principles which must inevitably bring discord among its own members, it may get a temporary hearing … but the air of America is too friendly to permit such a disease to last.”

“The way to fight such movements as this one,” another editorial said on Nov. 13, 1924, “is not by violence. That only adds impetus to them. It gives them favorable publicity as being persecuted. Not only that, it is morally wrong.”

“But at the same time we shouldn’t sit back and hope to see them die a natural death. Too many people believe that silence give consent. An organized system of publishing truth and facts concerning the Church, that is what we want.”

“If we spread truth among our non-Catholic friends,” he added optimistically, “sooner or later they will realize that such a movement as the Klan has no place in our American institution.”

Lord David Alton Is Not Remaining...