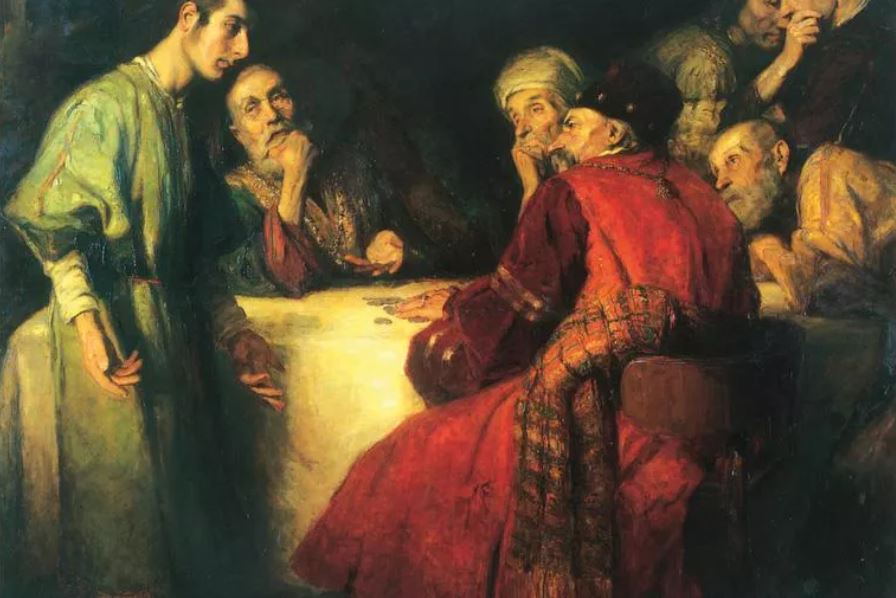 A reflection on St. Joseph by Father Raymond de Souza for your Holy Week contemplations.

In his apostolic letter for the beginning of the Year of St. Joseph, Pope Francis cites Polish author Jan Dobraczyński. The Holy Father explains that his novel, The Shadow of the Father, “uses the evocative image of a shadow to define Joseph. In his relationship to Jesus, Joseph was the earthly shadow of the heavenly Father: he watched over him and protected him, never leaving him to go his own way.” (Patris Corde #7)

Nevertheless, Joseph is not present in the Lord’s public life. Yet we might find St. Joseph during Holy Week, if we allow ourselves to imagine where his “shadow” may have fell upon Jesus in those most sacred days.

One of the Twelve, who was called Judas Iscariot, went to the chief priests and said, “What are you willing to give me if I hand him over to you?” They paid him thirty pieces of silver, and from that time on he looked for an opportunity to hand him over.

In some traditions today is called “Spy Wednesday” because the plot against Jesus has gathered a betrayer, a spy in the midst of the apostles. Judas is on the look out for an opportune time (cf. Luke 4:13).

The price was thirty pieces of silver. In ancient Israel it was the amount that the master of a slave ought to be paid if his slave was killed by another’s ox (cf. Exodus 21:32). Jesus was sold for the equivalent of the damages paid for a dead slave.

The Passover was at hand. The chief priests were eager to complete their plot against Jesus in haste; they did not want to provoke an uproar during the feast (cf. Mark 14:1-2). Some Jewish families were likely purchasing their Passover lambs when Judas went the chief priests and offered the Lamb of God for sale.

It is Passover. The great feast is at hand.

The disciples approached Jesus and said, “Where do you want us to prepare for you to eat the Passover?” He said,

“Go into the city to a certain man and tell him, ‘The teacher says, My appointed time draws near; in your house I shall celebrate the Passover with my disciples.’” (Matthew 26:17-18)

It will be the last Passover Jesus celebrates. It will be in Jerusalem. Jesus is familiar with the pilgrimage. Joseph and Mary “went to Jerusalem every year at the feast of the Passover” (Luke 2:41). Some of Jesus’s fondest childhood memories would be of those pilgrimages at Joseph’s side, gathering with others to live again the central events of the Exodus. The Jewish ritual of Passover assigns various tasks – prayers and solemn readings – to various men of the family. Joseph would have taken his part; perhaps the Boy Jesus first heard the Passover story from Joseph.

Now the time of fulfilment is at hand. Joseph brought Jesus to the Temple many times; now in sight of that very Temple Judas brings the cohort to arrest Jesus. The journeys of Holy Week, from Bethany to Mt. Sion, from Gethsemane to the Sanhedrin, in the Temple precincts – all of this Jesus would have learned years earlier at Joseph’s side.

Joseph is there no longer, but his memory would have been strong in the places and prayers, the rhythms and rituals of Passover in Jerusalem.

Every detail of Holy Week speaks profoundly of the prophecies of old. The cups of wine, the psalms sung, the timing of the movements, even the clothes that Jesus wore. All this had been handed down, generation after generation, in faithful Jewish families. Joseph handed it down to Jesus. Now Jesus, on the threshold of being handed over, is ready to fulfill it all.
Share With:
Previous Article