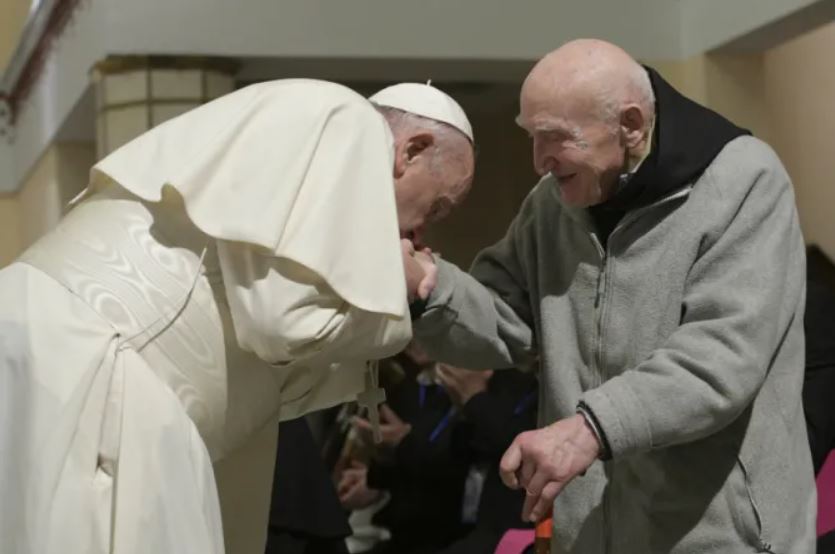 Father Jean Pierre Schumacher, one of two monks who survived the Tibhirine abbey massacre in Algeria in 1996, has died at the age of 97.

Schumacher died in Morocco, where he had been living in a Trappist monastery in Midelt, on Nov. 21, the feast of Christ the King.

The late monk served as the night porter of the Tibhirine abbey on March 27, 1996 when members of the Armed Islamic Group kidnapped and later beheaded seven of his confreres.

The kidnappers, who entered the abbey through the basement, did not pass the front door where Schumacher was stationed that night. The only other survivor from the community, Father Amédée Noto, died in 2008.

The seven martyred monks from his community were beatified on Dec. 8, 2018, along with 12 other Christians killed during the Algerian civil war in the 1990s. Schumacher was present at their beatification at the Shrine of Our Lady of the Holy Cross in Oran.

The Tibhirine monks’ story was also dramatized in the 2010 French film Of Gods and Men, which won the Grand Prix at the Cannes Film Festival.

Pope Francis greeted Schumacher and kissed his hand during his apostolic visit to Morocco in March 2019.

Schumacher was born in Lorraine, France in 1924. After Germany took de facto control of Alsace-Lorraine during World War II, he was enlisted by force into the Wehrmacht, but was never sent to the front due to a medical diagnosis of tuberculosis.

He joined a seminary run by the Marist fathers after the war and was ordained a priest in 1953. A few years later he joined a Trappist monastery in Brittany, France.

Schumacher was sent to Algeria to join the Tibhirine abbey in 1964 at the request of the Archbishop of Algiers. He had been part of the community for 30 years when his brothers were martyred.

After the massacre, Schumacher reestablished Notre Dame de L’Atlas Monastery in Morocco along with Father Noto.

The monk said in an interview in 2011 that he prayed continuously for the Muslim extremists who killed the other members of his community, noting that his community’s prior, Father Christian, forgave his assassins before his martyrdom.

“We must forgive. God calls us to love each other,” Schumacher said.