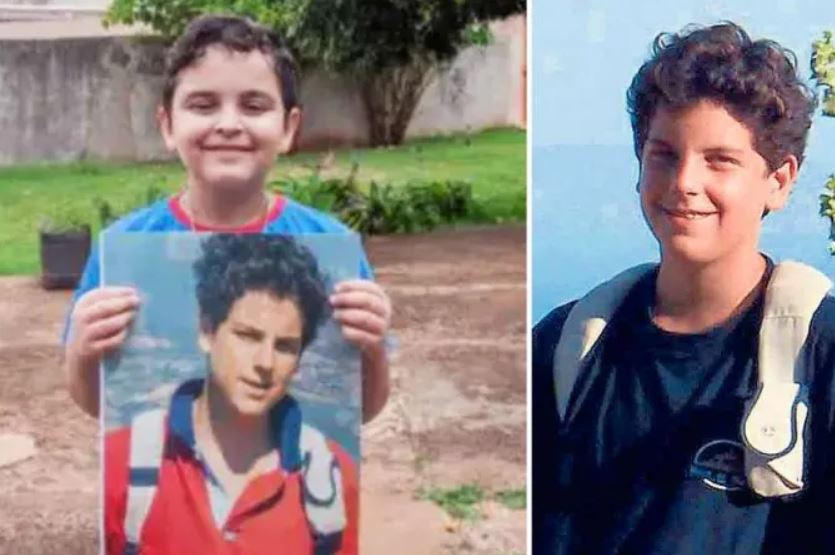 Mattheus (left) holds a photo of Carlo Acutis (right), whose prayers are attributed with the boy’s healing. / Campo Grande News

The beatification of Carlo Acutis took place Oct. 10, 2020 after a miracle attributed to his prayers and the grace of God. In Brazil, a boy named Mattheus was healed from a serious birth defect called an annular pancreas after he and his mother asked Acutis to pray for his healing.

Mattheus was born in 2009 with a serious condition that caused him difficulty eating and serious abdominal pain. He was unable to keep any food in his stomach, and vomited constantly.

By the time Mattheus was nearly four years old, he weighed only 20 pounds, and lived on a vitamin and protein shake, one of the few things his body could tolerate. He was not expected to live long.

His mother, Luciana Vianna, had spent years praying for his healing.

At the same time, a priest friend of the family, Fr. Marcelo Tenorio, learned online about the life of Carlo Acutis, and began praying for his beatification. In 2013 he obtained a relic from Carlo’s mother, and he invited Catholics to a Mass and prayer service in his parish, encouraging them to ask Acutis’ intercession for whatever healing they might need.

On the day of the prayer service, she took Mattheus and other family members to the parish.

“On October 12, 2013, seven years after Carlo’s death, a child, affected by a congenital malformation (annular pancreas), when it was his turn to touch the picture of the future blessed, expressed a singular wish, like a prayer: ‘I wish I could stop vomiting so much.’ Healing began immediately, to the point that the physiology of the organ in question changed,” Fr. Gori said.

On the way home from the Mass, Mattheus told his mother that he was already cured. At home, he asked for French fries, rice, beans, and steak – the favorite foods of his brothers.

He ate everything on his plate. He didn’t vomit. He ate normally the next day, and the next. Vianna took Mattheus to physicians, who were mystified by Mattheus’ healing.

Mattheus’ mother told Brazilian media she sees in the miracle an opportunity to evangelize.

“Before, I didn’t even use my cell phone, I was averse to technology. Carlo changed my way of thinking, he was known for talking about Jesus on the Internet, and I realized that my testimony would be a way to evangelize and give hope to other families. Today I understand that everything new can be good, if we use it for good, ” she told reporters.

A version of this story was first reported by ACI Digital, CNA’s Portugese-language news partner. It has been translated and adapted by CNA. This story was originally published on Oct. 10, 2020.