The Miraculous ‘Mother of God of Zarvanytsia’ Watches Over Ukraine 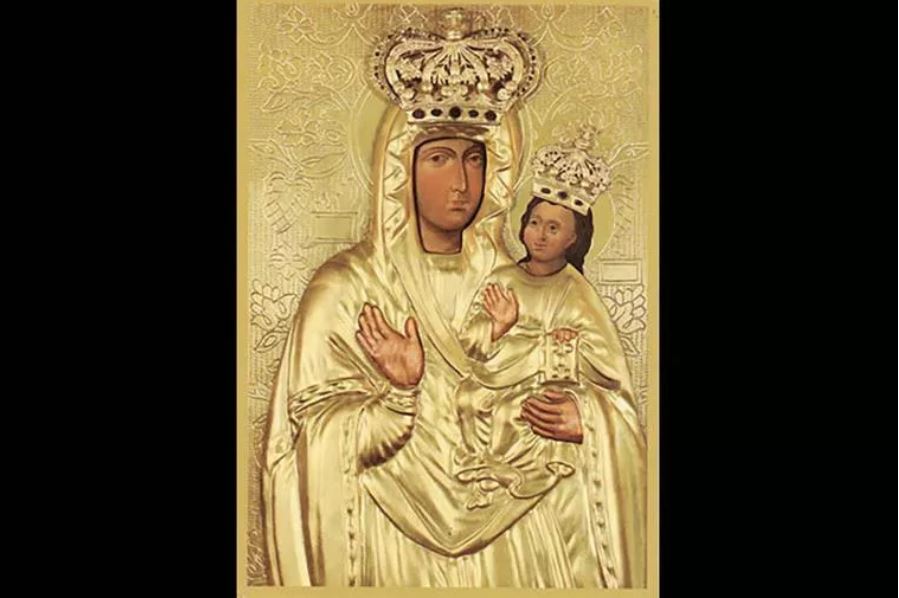 The Miraculous ‘Mother of God of Zarvanytsia’ Watches Over Ukraine

‘We see that the Blessed Virgin has covered us with a veil. God appeared to us and gave us strength.’

The city of Lviv near the western border of Ukraine and Poland has seen tens of thousands of women, children and elderly arriving as they seek safety in the war against their country. Until now, the country’s most popular destination for Ukrainian Catholics has always been the small village of Zarvanytsia, part of the scenic landscape, approximately 45 miles southeast of Lviv. Catholic Ukrainians would make pilgrimages to this place and its Marian Spiritual Center to pray before the miraculous icon of the Mother of God of Zarvanytsia to seek her help and healing.

But now the tragedy of war will disrupt that.

It is a distinct honor for a papal crowning of an icon. The Mother of God of Zarvanytsia has been crowned twice. The first time was in 1867 when Blessed Pius IX blessed two crowns — one for Our Lady and the other for the Child Jesus she holds with her left arm.

The second time was on Oct. 15, 2017, when Pope Francis blessed the original crowns for the icon at St. Peter’s in Rome. The priest from Zarvanytsia’s archeparchy who accompanied the icon explained at that time that this particular icon was known as a copy by iconographer Petro Kholodnyy. “This artist wrote the icon in 1922, when he restored its original. The coronation of a copy, already famous for numerous miracles, is associated with this 150th anniversary [of the first crowning].” While the original icon of the Mother of God of Zarvanytsia remains in the parish church in Zarvanytsia, this (other) icon was then returned to the altar in the Cathedral of the Mother of God of Zarvanytsia at Marian Spiritual Center.

In 2019, Pope Francis raised the cathedral to a basilica. “The Holy Father seems to indicate that if anyone wants to be saved in the storm of the sea of life, he should go to Zarvanytsia. Your Mother’s waiting for you there!” So said Major Archbishop Sviatoslav Shevchuk, the leader of the Ukrainian Greek Catholic Church.

The centuries-old origin of this icon of the Mother of God of Zarvanytsia is also miraculous. The fascinating history is presented in fine details by the Archeparchy of the Ukrainian Catholic Church in Philadelphia. It tells us how the village got its name from this icon in 1240, nearly 800 years ago. That year Kyiv was invaded by Mongols. As invaders destroyed churches and monasteries, monks fled. Some made their way to what was known as Galicia, a territory that would be partly in Poland and partly in Ukraine, according to today’s borders.

One of the monks who escaped was a native of this area. Exhausted and wounded, he stopped for a night’s rest in the woods. Brother Oleksandr Bilyk writes:

The monk sincerely prayed for his war-torn land, asking for the intercession of the Mother of God, yet soon fell asleep while praying. In a dream, the Blessed Virgin Mary appeared with two angels holding white lilies. The Mother of God blessed the monk and touched him with Her omophorion. The monk woke up and saw a beautiful valley surrounded by a wreath of dense forest. Suddenly a spring of clear water shone in the dewy grass, and above it, the icon of the Blessed Virgin Mary with the baby Jesus in her arms flashed with celestial brightness. The monk fell to his knees and prayed earnestly while washing his wounds. Soon his strength returned to him, and in honor of this miracle, the monk built a cell in a cave and placed the icon there.

He then gave the place a name which remains — “Zarvanytsia.” (“Zarvaty” means to carry someone or something away: he recalled how, by her appearance, the Mother of God “carried him away” or woke him up from his sleep.)

There is an Old Testament ring at this point because when people heard about the miraculous cure of the monk, and wishing for cures themselves, they did the same as the Jewish villagers who gathered wherever they heard Jesus was to be — they traveled from everywhere to Zarvanytsia. It soon became a major pilgrimage site that continues into the present where throughout this place’s extensive history, “there are thousands of testimonies of miraculous healings of the sick and other miracles.”

Then in 1867 Blessed Pius IX not only blessed the crowns for the icon but also named Zarvanytsia a sanctuary.

All was not smooth over the centuries as Ukraine had its share of suffering from enemies bothering it. Turks destroyed the town in the 17th century. But despite other threats and troubled times, nothing could stop the devotion and pilgrimages to Zarvanytsia, to the miraculous spring there, and to pray and petition the Mother of God before her miraculous icon.

When in 1772-1773 the plague threatened the population of Berezhany, a town 26 walking miles directly south, “people turned to the Blessed Virgin Mary and the Crucified Savior in the Miraculous Icon and to the water from the well,” explains Brother Bilyk. “The epidemic receded, and hundreds of the sick recovered.”

In 1894 a chapel was constructed near the spring. During the summers, people in the thousands would come to the shrine, especially from around western Ukraine to attend the Divine Liturgy, take part in the precession to the spring. “Many visitors brought their sick friends and family,” writes Brother Bilyk. “On their knees, they prayed to God and the Blessed Virgin Mary to give them healing from various ailments.”

In World War I the church was damaged when shells stuck. Then World War II caused its own disruption. Brother Bilyk relates how the villagers hid the miraculous icon of the Mother of God of Zarvanytsia so it would not be destroyed. Then came the Soviets takeover. We know what they thought of religion and Catholicism as they severely persecuted the Ukrainian Greek Catholic Church. A year after the war ended, the Soviets banned pilgrimages. They destroyed the friary. Brother Bilyk notes that “the Soviet authorities did everything possible to prevent people from coming to Zarvanytsia.”

That did not stop the people. They came begging the Mother of God for her aid. “Authorities then decided to destroy the spring itself, blowing up the chapel above it in 1960 and fencing the area with barbed wire,” relates the brother. “But, even this did not stop the pilgrims. On the contrary, it provoked an even more significant influx of people who, hiding from the NKVD, came to the stream at night, begging for healing.”

The belief and faith of the Ukrainian Catholics were unbeatable. They could not be conquered. Finally, the icon that had to remain hidden away until it was safe to return it to the basilica-to-be, took its rightful place once again in 1989 in the church now opened again.

And Zarvanytsia grew even more. In 1991, the chapel above the spring was restored. Then the Church of the Holy Eucharist was built in 2012, and the Marian Spiritual Center, a reproduction of the home of Mary in Nazareth, was added in 2018. Later a memorial was added to honor St. John Paul II. On his official visit to Ukraine in June 2001, he prayed before this miraculous icon of the Holy Mother of Zarvanytsia (see the prayer below) when it was brought to him at the Church of Saint Nicholas in Kyiv.

Protection of the Mother of God in Zarvanytsia

“We see that the Blessed Virgin has covered us with a veil. God appeared to us and gave us strength,” Archbishop Sviatoslav said. “We remained united as the Church and the country.”

Referring to how the world was kneeling before the pandemic disease, he continued, “Our faith is manifested in the fact that God is among us. He is with us, and we will not be shaken, we will not kneel before anyone or anything.”

Those words were prophetic about the Ukrainians standing in the face of aggression. As he prayed for healing of those ill with the virus and those who cared for them, he added, “Today we pray for peace, because we do not forget that Ukraine is still at war. May the Lord God, who is our peace, as the Apostle Paul says, listen to our prayers through the faith of his mother. And may he tell us today: rise, pick up your bed and go home.”

The millions of Ukrainian pilgrims who visit this sacred site, worship the Lord, and pray for healing and help before the Mother of God in Zarvanytsia are hoping and praying to hear that.

May the Mother of God of Zarvanytsia protect the Ukrainian people so devoted to her.

Prayer of John Paul II to Our Lady of Zarvanytsia

O Blessed Virgin Mary, Our Lady of Zarvaniza,
I thank you for the gift of my visit to the Kyivan Rus’
from where the light of the Gospel spread through this whole region.

Here before your miraculous icon,
kept in this church of Saint Nicholas,
I entrust to you, Mother of God and Mother of the Church,
my apostolic journey to Ukraine.

spread your maternal mantle over all Christians
and over all people of good will
who live in this great nation.

Lead them to your Son, Jesus,
who is for everyone the way, the truth and the life.