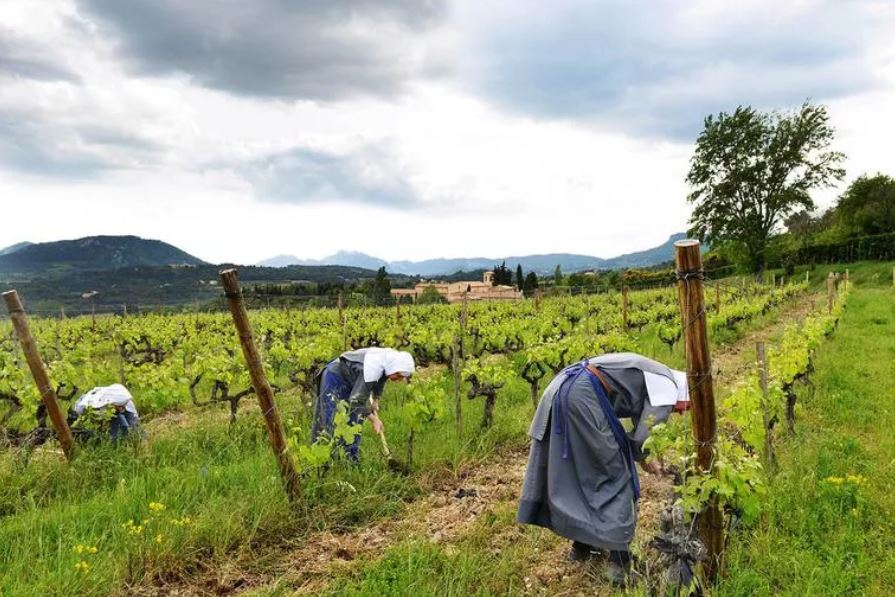 Launched in 2016 in France, Via Caritatis’ grand cru wines — the fruit of an association between wine growers and the monks and nuns of the Abbeys of Le Barroux — are now available in the U.S.

In the famous Good Samaritan Parable of the Gospel of St. Luke, the first gesture of the Samaritan traveler, at the sight of the man left half-dead by robbers on his way to Jericho, was to pour oil and wine over his wounds. Such a metaphor, designed to evoke the concrete manifestation of God’s love in the life of human beings wounded by sin, has had a lasting cultural impact on Christian societies that since then have always associated these two culinary elements to sanctuaries of divine tenderness and mercy.

It is with this desire to offer the people of God a glimpse of divine goodness that the Benedictine monks and nuns of Le Barroux, in the Provence-Alpes-Côte d’Azur region of southeastern France, have followed in the footsteps of their predecessors, who, since St. Benedict of Nursia, have been at the leading edge of the production of wine in the West. They  have resumed the wine-growing activity of their lands where, almost seven centuries earlier, Pope Clement V planted the first papal vineyard of France.

In 1309, this pope who is known for having moved the papacy from Rome to Avignon and settled his vacation resort in the Benedictine monastery of the Groseau in Malaucène, a small village adjacent to Le Barroux, located at the foot of Mont Ventoux. The straw wine produced by this vineyard was particularly appreciated by his successor, Pope John XXII, who continued to serve it to its most distinguished guests.

But it was not until the 20th century, after the First World War, that the winemakers of the canton of Malaucène started to enhance this terroir by striving to develop high-quality products, with a desire to honor the glorious papal heritage of their land. Their long quest for excellence was rewarded in 1973, when they obtained the status of “AOC Ventoux” (Protected Designation of Origin).

It was at that period of time that monks returned to this region, when Dom Gérard Calvet established the Abbey of Sainte-Madeleine du Barroux, located on Malaucène’s borders. Their wine-growing activity, however, did not start until the arrival of a community of nuns at the adjacent Abbey of Our Lady of the Annunciation, in 1986.

This monastic presence, whose farming activity focuses mainly on winery and the production of olive oil, turned out to be a true blessing for local families of winegrowers, at a time when it has becoming increasingly difficult for them to earn a decent living.

“There has been a lot of land abandonment over the past decade; small winemakers could no longer live from their work because the Ventoux designation was undervalued and winemakers were losing money,” Gabriel Teissier, director of development at Via Caritatis, told the Register. “Indeed, mountain agriculture, made of many small and nested plots, cannot be mechanized, and they were forced to do a very hard and uneconomical precision work on their vineyards.”

The monks of the Barroux Abbey, whose winery consists of an archipelago of small plots shared with other winemakers, rapidly understood that the precariousness of the situation could also represent an opportunity. Indeed, their environmental factors, called terroir (located at a height of 1,000 to 1,150 feet, between Mont Ventoux and the Dentelles de Montmirail range), benefiting at the same time from the Mediterranean climate of the south of France, the mountain freshness and from different soil types that complement each other, has all the necessary characteristics to make grand cru wines.

This is how, in 2015, the monks offered to join forces with their winemaker neighbors and make their terroir gain its letters of nobility in the wine industry.

In an interview with the Register, the monk responsible for the abbey’s vineyards — who preferred not to have his name spread in the media for the sake of his community’s well-being — explained that this venture was meant to work for the common good of the participants, providing both a suitable farming underpinning to the abbey’s monastic life and a solid opportunity for families to stay in the region and obtain a sufficient livelihood from their work.

“I got the idea of doing our wines separately and then to blend them together with the winegrowers’ so that we could involve them in our monastic work and have their expertise recognized, as is right and proper,” he said. Therefore, the work of the monks and nuns in their respective vineyards, about 25 hectares in total, is also serving as a laboratory for local winegrowers who can adopt new techniques, more adjusted to their specific vineyards.

One year later, the original concept of “One Pope, Monks and Winegrowers” became a proper brand under the name “Via Caritatis.” And in order to reveal to the world the uniqueness of their terroir, the newly created team spared no effort and invested substantially. As for the monks, there are a least seven or eight of them working on the abbey’s vineyard on a daily basis (with significant help from the nuns who also carry out a number of tasks in their 4-hectare vineyard). During the grape harvest, the whole community is put to work.

But in their quest for excellence, the monks and winegrowers could also count on the internationally renowned expertise of Philippe Cambie, who was crowned oenologist of the year 2010 by noted U.S. wine critic Robert Parker. “Cambie was touched by the core of our project and accepted to help us in the blend process, in the construction of ranges of wine at an oenological level, and he perfectly identified the peculiarity of our wine and terroir,” the monk continued.

Via Caritatis’ full range consists of nine bottles of red, white and rosé wines, divided in three different ranges whose names recall the Benedictine liturgy: Vox (the entry-level wines), Pax and Lux (their core range). “Our Lux red is the equivalent of a great Châteauneuf-du-Pape but more digestible and fresher, while our Lux rosé recently tied for second place in the Revue Vinicole internationale classification, after legendary Château Sainte Marguerite.”

Then, enthroned on the top of these three marketed ranges, are the special Wines Abbayes, exclusively made by the Barroux monks and nuns, which are their luxury products par excellence. However, customers can only get some by purchasing the Via Caritatis wooden box with four other bottles made in collaboration with local winegrowers.

“Today, our community knows what must be done to make the greatest wines, and we are lucky enough to be able to do that inside our abbey, to guarantee the best possible quality, even from our entry-level wines,” the winegrower monk said. “For me, in fact, there is no way that even our cheapest wines are not already a reflection of the Good Lord, who is incapable of giving bad things to his creatures.”

Charity as a Business Model

On the label of each bottle, the two hands coming out from the earth and opening toward the sky, bearing the script “Via Caritatis” with a rose window underneath and a cross in its center, reminds patrons that with these wines the monks are trying to open tasters to another path, a greater, higher and brighter path than any other — that of charity.

The four cicadas appearing in the cross’ arms, representing the wine growers of the Provence region, are another symbol of that same charity underlying this business from its very foundations. And to make sure that the customers get this divine message properly, the cork is there to remind them that s’[ils n’ont] pas la charité, [ils ne sont] rien (“If I do not have love, I am nothing,” 1 Corinthians13).

It is in this same logic that the brand rooted itself in a system of “real-world economics,” a system whereby the sale of bottles during the year must cover the costs of the investments that the abbeys put on the table in the first place. In fact, the monks covered the initial expenses in order to assist their fellow winegrowers, and they bought the latter’s wines above the region’s reference prices so that they could quickly make ends meet.

“We make this wine with all of our monastic approach to transmit this message of charity to tasters, and through these products, we were given a free hand to communicate with all that a monk bears in his heart,” the monk continued. “We’re not homo sapiens but homo biblicus, so we’ve been working a lot on every step to make the final result look like our spirit.”

‘Putting Together Notes That Love Each Other’

One only needs to watch the monks blend their wine to understand that their work has more to do with an artistic creation than with a mere technical process. Inspired by Mozart’s way of “putting together notes that love each other,” the monks associate the assembling process to a musical composition, and more specifically to the sound of the organ or that of a Gregorian chant for the unique fullness of their sound.

Such a fullness is precisely what the Barroux monks are seeking for their wines, while bearing in mind that just like musical instruments, each grape variety — from Chardonnay to Clairette and from Syrah (shiraz) to Grenache — “has its own particular tone color and specific register.”

“Wine and music have a lot in common,” the wine-grower monk concluded. “Our wines can have a color that looks like the playing of an organ, that is full, powerful and smooth at the same time.”

After having won hearts and minds across France, Via Caritatis was recently allowed to export its products to the United States, to the delight of Father Michael, a 56-year-old monk (originally from Richmond, Virginia) who left his homeland 33 years ago to join the Barroux Abbey.

After having worked in the abbey’s vineyard for a decade and participating in the great adventure of Via Caritatis, Father Michael is convinced that the centuries-old European wine culture still has much to contribute to the culture and spiritual life of his compatriots.

“It is no accident if Jesus Christ chose wine to incarnate his blood during the Last Supper,” he told the Register, “and although I never expected to be part of this universe one day, I think it is a fundamental element of the Christian culture.”

7 Things Everyone Needs to Know Ab...